Fish Oil Q is a supplement with fish oil and Coenzyme Q10, promising to help with a healthy heart and mind and other benefits. It’s manufactured by Carlson Laboratories, founded initially as a small company in 1960s Chicago.

It was a family-owned family-inspired business and continues to be so even today. Although the labs moved to the suburbs to accommodate their continuous growth, their headquarters are still in Chicago.

Carlson Labs has more than 250 products to benefit anyone’s dietary needs, whether you want supplements for fish oils or vitamins and minerals.

One of Carlson Labs’ unique offerings is unaccredited courses. Retailers can learn about the natural products industry, get course completion certifications, and possibly earn free or discounted Carlson supplements. The company seems to be very quality-centric, using only the freshest and purest of ingredients.

Fish Oil Q contains 300 mg EPA, 200 mg DHA in its formula, two essential fatty acids for brain health. Its unique selling point is the inclusion of 100mg of Coenzyme Q10 (CoQ10, in the form of Ubiquinone).

While it sounds bizarre and synthetic, it isn’t. CoQ10 is found naturally in the human body and many of the foods we eat, and it’s an integral part of our diets. A 100 mg boost isn’t a lot, but it does help.

CoQ10 is often sold as a supplement by itself or as part of other supplements for various reasons. It can help with maintaining good blood pressure and general heart health. In some cases, it helps relieve headaches and improves sperm quality in men.

The only problem with Coenzyme Q10 is that the FDA doesn’t regulate its manufacture. This means that some brands don’t have the promised amount in their products, as discovered by an independent group some time ago. Carlson Labs has won awards from this group, so there’s no reason to believe they adhere to any but the highest standards.

It has 1000 mg of fish oil and 100 mg of Q10 per capsule. The oil comes from anchovy and sardine in this product, which is fine, but we would prefer to see cod and/or tuna included. Capsule shells have ingredients like gelatin and beeswax, so it’s not entirely vegetarian.

In a small 100 mg dose, there won’t be drastic results. It’s safe in high doses, although very high doses may lead to gastrointestinal distress. In general, amounts should not exceed 1200 mg a day, and Fish Oil Q isn’t anywhere near that.

Coenzyme Q10 is not regulated by the FDA, so different brands have different levels of quality. Several years ago, ConsumerLab analyzed additional supplements with Q10 and found that the quantity sometimes didn’t match the label.

Carlson has won multiple awards from ConsumerLab, so it’s safe to say that Carlson Labs aims for high quality.

Each bottle lasts for around two months, so Fish Oil Q is one of the more expensive fish oil supplements offered by Carlson Laboratories. It has adequate amounts of EPA and DHA, but we’re not sure if there’s enough Coenzyme Q10 to really justify the price.

Compared to similar products, the price is still reasonable, but it’s a little more iffy compared to other Carlson products.

Fish oil has numerous benefits, especially with increased levels of Omega-3s; fish has its reputation as brain food for good reason.

Fish Oil Q seems like an excellent way to improve your mental health and maintain a healthy heart.

The combined efforts of fish oil with 500 mg of Omega-3s and Coenzyme Q10 seems useful. This is a reasonably inexpensive supplement, although it’s higher than average compared to other Carlson products.

The company makes many fish oils, and most of them contain the same 1000 mg dose. Overall, Carlson Laboratories is a great company to buy from, as they have reasonable prices with quality products. 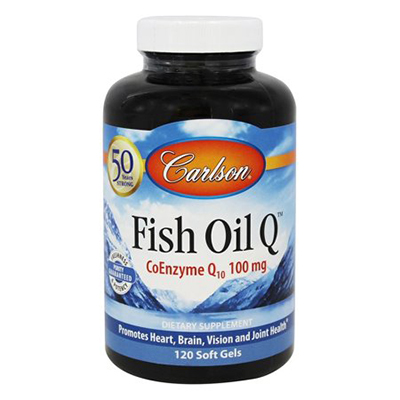 clear
Q:
What are the core ingredients in Fish Oil Q?
A:

Of course, combining Omega-3 fatty acids with Coenzyme Q10 is an atypical but significant move. Taking Fish Oil Q yields subtle results, and you'll want to keep taking it for the long-term effects. Fish is brain food and healthy for your cardiovascular system, and CoQ10 boosts that Omega-3 power.

Since studies of CoQ10 only picked up in the 1980s, there's still more research to be done, but so far, the evidence says that CoQ10 is excellent for the human body. It's found naturally in many of our foods, mostly meat and fish, and has tremendous long-term benefits.