Omega Brain Review – 8 Things You May Not Know

Omega Brain is an Omega-3 based formula marketed to support a healthy brain function. The formula manufactured by Blackmores is claimed to be of the highest purity, tested for mercury, dioxin, and PCB (polychlorinated biphenyl).

Blackmores is an Australian business set up in the 1930s in Queensland. Due to its extensive experience, the company claims to be Australia’s leading natural health brand and currently develops. Today it markets numerous vitamins, minerals, herbs, and other dietary supplements that target health conditions ranging from brain health to weight management.

Through high concentrations of Omega-3 fatty acids EPA and DHA, the formula has health-promoting effects. It is recommended for those who desire to maintain mental and cognitive function as they age.

Omega Brain is recommended for adults and children over the age of 2 years old. Children between 2 and 6 years old should use the formula only as professionally prescribed.

1) Omega Brain at a Glance

Omega-3s EPA and DHA are essential fatty acids, meaning they are not produced by the body but have to be obtained from the diet. Essential foods with high in Omega-3’s include sardines, salmon, cod, flax seeds, and walnuts.

Research indicates that Omega-3 fatty acids may be better absorbed from food than supplements. Omega-3 fatty acids play an essential role in several body functions, processes, and organs, from reducing inflammation in the blood vessels and the joints to lowering cholesterol and blood pressure to improving bone strengths and potentially preventing osteoporosis.

DHA is crucial for neuro-development and transmission of signals between brain cells. It is found in 40-50% of human brain tissue and 60% of eye tissue. Several research studies have shown EPA to positively impact depression, although an exact connection is yet to be established.

Their blood-thinning properties help reduce the risk of heart attacks, stroke, or people suffering from coronary artery disease. Hence, they may cause excess bleeding, particularly in people taking anticoagulant drugs.

Omega Brain is advertised to be an all-natural formula, free of added sugar, artificial preservatives, colorings, or flavors.

2) What Are Omega Brain Ingredients?

3) Does Omega Brain Work and it is Safe?

Representing a blend of two essential Omega-3 fatty acids, Omega Brain is recommended for people who desire to enhance their cognitive functions or simply maintain a healthy mind while age-related processes take place.

Evidence has shown DHA and EPA are essential fatty acids, but they’re not produced by the body, but obtained from the diet. Foods with a high concentration of Omega-3 include salmon, flax seeds, walnuts, and cod.

DHA is necessary for the transmission of signals between human brain cells as well as neuro-development. Found in a proportion of 40 to 50 percent in brain tissues and 60 percent in the human brain, it represents a vital component for proper development.

At the same time, EPA possesses a positive impact on depression, although further research is required.

Because of their blood-thinning qualities, they may help reduce the risk of strokes and heart attacks. However, they may cause excess bleeding, especially in people who are taking the anticoagulant medication.

Even though the formula is promoted as all-natural and lacking artificial preservatives, colorings, or flavors, there are no online customer testimonials to attest to its efficiency.

5) Precautions of Omega Brain Use

6) How Much Does Omega Brain Cost?

Omega Brain can be found for purchase by bottles that contain 60 tablets. Children between six and twelve years old are advised to take a tablet per day, while adults should take a tablet twice per day.

Therefore, a bottle can be sufficient for either a month or two months of treatment. Its price is considered affordable compared to similar dietary supplements.

The recommended daily dosage for adults is 1 tablet taken twice a day with meals. Children between 6 and 12 are advised to take 1 tablet per day (preferably pierced and squeezed in milk or any other drink).

In contrast, children aged less than 2 should only take the formula as professionally advised. No consumer reviews are available online; therefore, we cannot say to what extent the product reaches its goal.

Omega Brain is a combination of Omega- 3 EPA and DHA. The formula promotes healthy brain function, commonly associated and promoted to Omega-3 based products. The product bears little differentiation from similar products.

However, it does not contain any artificial ingredient and is tested for purity. Also, the manufacturer claims the formula is odorless without surfactants (as usually, these products tend to have a fishy odor and taste).

Still, there are no consumer reviews made public to evaluate the formula’s actual effectiveness in the benefit areas claimed. As with any dietary supplement, we recommend caution and advise you to seek a healthcare professional’s advice before using Omega Brain. 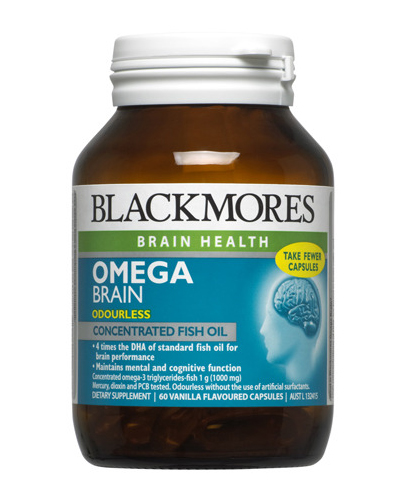 clear
Q:
What are the Omega Brain ingredients?
A:

Omega Brain is a dietary supplement advertised as a concentrated source of Omega-3 fatty acids that will assist users in their effort to maintain a healthy brain function.

The formula is manufactured by Blackmores, an Australian based company with a history of more than 80 years in the field of nutritional foods.

The formulation is promoted as tested for contaminants and as a product optimized to ensure premium DHA content. DHA is considered an essential "brain food" due to its essential role in developing, developing, and maintaining brain and cognitive function.

Q:
Does Omega Brain work?
A:

Overall, Omega Brain represents a combination of EPA and DHA found in Omega-3. The formula is suggested for promoting healthy cognitive functions and enhancing general well-being. However, there are very few differentiations from similar remedies.

The manufacturer claims that the formula lack surfactants; therefore, the product is odorless. Since there are no online testimonials to attest to this supplement's efficacy, clients can just take for granted the manufacturer's claims before following the treatment.

Because Omega Brain is a supplement, it doesn't replace a proper lifestyle. It should be balanced with a healthy diet and an excellent exercising program to obtain the desired results.

I read about the benefits of DHA on the brain and eyes, so I decided to try one when I noticed that my vision was not as good as before. I also had some difficulties in concentrating at work, partially due to stress factors. I have been taking these capsules for three months now and feel excellent! I noticed that my vision has slightly improved and I am now able to stay focused for longer periods increasing my productivity a lot. And my boss sees this improvement too, which is a great thing! Excellent product!

I enjoy taking this supplement because it is easy to swallow, I trust the manufacturer, and it has been really helpful for my memory, particularly long-term memory. I used to have a hard time remembering new information, even after a short while after I learned it. But now I am able to remember numbers and data long after I have read it, and without putting much effort in retaining this info. I love it!