Paraplex Review – 8 Things You May Not Know

Paraplex is advertised as a dietary supplement that has been specifically created to encourage a normal carbohydrate metabolism, thus sustaining the health of glands like pituitary, pancreatic, and thyroid. It was introduced on the nutritional field in 1965 by a business named Standard Process.

This company was founded in 1929 by Dr. Royal Lee who possesses a nutritional philosophy often viewed as different from other nutritional company founders. Usually nicknamed the “Einstein of nutrition,” Lee claims that the source of a compound is more important than the quantity used in any product. Because of this some supplements that only feature low quantities of whole foods can deliver more reliable results than “all-but-the-kitchen-sink” approaches. Moreover, their supplements were divided into three categories known as Standard Process Veterinary Formulas, MediHerb, and Standard Process whole food supplements.

The founder claims that Paraplex features a mixture of ingredients from other products designed by them such as Thytrophin PMG, Pancreatrophin PMG, Pituitrophin, and Drenatrophin PMG. Hence, the formula is based on a mixture between calcium and a proprietary blend that offers support when it comes to regulating bodily hormones. People who have type 1 or 2 diabetes and those with hypo or hyperthyroidism may take this supplement.

For approximately one hundred years, health care professional successfully used glandular products in alleviating or treating a series of symptoms related to glandular problems. It is known that the glandular system offers a series of substances that are used in processes which are performed throughout the body and influence the most important organ systems.

People should know that the glandular system depends on hormonal balance. If for example one of the glands doesn’t properly function, there is a ripple effect which determines a number of dependent glands or organs to operate in a less efficient way. The founder of Standard Process, Dr. Royal Lee thinks that glandular products work on the immune system due to the fact that they neutralize autoimmune conditions. Based on this feature, he created an entire line of products named Protomorphogen extracts which was created for promoting healthy glandular functioning, thus maintaining the body’s natural balance.

Paraplex was created to keep a proper pancreatic, thyroid, adrenal and pituitary endocrine functioning. By mixing a series of extract from bovine glands, it helps support the balance in order to obtain an appropriate carbohydrate and sugar metabolism.

By mixing the proprietary blend with calcium, its impact is enhanced. Calcium has a key role in some functions of the body like blood clotting, muscle contraction, hormone release, blood vessel function, and nerve signal transmission.

For more than 100 years, health care professional has successfully used glandular products. It is a known fact that the glandular system in the human body provides a series of substances which are used in processes that are performed through the body and influence major organ systems.

People should keep in mind that the glandular system directly depends on balance. If one of the glands malfunctions, there is a ripple effect that causes some dependent organs or glands to operate in a less efficient mode. The founder of Standard Process, Dr. Royal Lee believes that glandular products work on the immune system because they neutralize autoimmune conditions. Because of this, there is an entire line of goods called Protomorphogen extracts that were designed to promote health gland functioning, thus helping maintain the body’s natural balance.

This precise formulation was designed to maintain a proper pancreatic, adrenal, thyroid and pituitary endocrine functioning. By combining a series of extract from corresponding bovine glands, it should help support the balance regarding appropriate sugar and carbohydrate metabolism.

Additionally, by combining the proprietary blend with calcium, its effects should be enhanced. For example, calcium plays a key role in some bodily functions such as hormone release, blood clotting, muscle contraction, blood vessel function, and nerve signal transmission.

There are online customer testimonials about Paraplex. What is being reported includes:

6) How Much Does Paraplex Cost?

Like the majority of Standard Process supplements, Paraplex can be found for purchase by bottles that feature 90 tablets. Because the recommended daily dosage is one tablet per day, a bottle may last for up to three months if there are no excesses. It is overall considered to be an affordable product. Furthermore, most of the retailers offer some discounts and promotions for both new and possible customers. There is, however, a downside because there is no international shipment offered by its producer, people from outside America are obliged to seek this product on some online or local supplier where the price may vary.

The daily suggested dose of Paraplex for a normal individual is of one tablet per day, with water

Created as an enhancer of pituitary, adrenal, thyroid, and pancreatic gland, Paraplex relies its positive effects on a mixture between calcium and a proprietary blend. It can be suggested for people that suffer from hyper or hypo-hormonal excretion. For example, people that have type one or two diabetes can directly benefit from the usage of this supplement. On the other hand, vegans and vegetarians should avoid taking this treatment because it features a series of animal traces. Women who are lactating or pregnant should consult their personal healthcare provider before using this supplement due to the fact that it may have some side-effects on the baby. 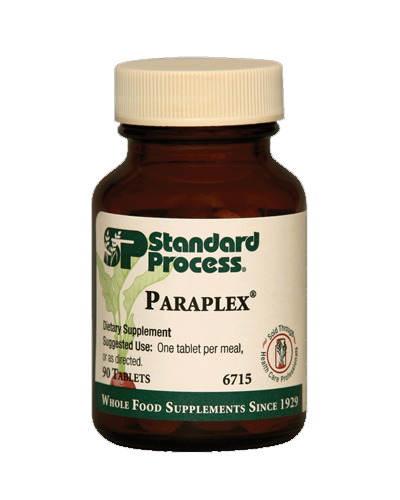 clear
Q:
What does Paraplex contain?
A:

Paraplex represents a dietary supplement which was designed in order to regulate the hormonal levels in glands like pancreatic, thyroid, adrenal, or pituitary. It was introduced on the market in 1965 by Standard Process. People who suffer from conditions like type one or two diabetes may directly benefit from this formulation because it helps with regulation of sugar in the blood. However, vegetarians or vegans can't follow this treatment because it has animal traces.

Q:
Are Paraplex benefits actually a reality?
A:

Designed as an improver of adrenal, pituitary, pancreatic, and thyroid gland, Paraplex bases its positive effects on a combination of a proprietary blend and calcium. It can be recommended for people who suffer from hypo or hyper-hormonal excretion. For example, people with type one or two diabetes may benefit from the usage of this supplement. However, vegetarians and vegans should avoid following this treatment because it contains a series of animal traces. Women who are pregnant or lactating should also consult their healthcare before using this remedy because it may have some unwanted side-effects on the baby.

It works great for me. I take three a day and my energy is greatly improved. My body temperature is warmer which didn’t happen using iodine alone. My skin is getting softer.

I have type 1 diabetes and I’m very pleased with this product!

I am a type 2 diabetic, can I take Paraplex and Drenamin from Standard Process at the same time? I also have started with Vitiligo on my face within the last 18 months. Thank you

Your on line article regarding Paraplex claims there can be some unwanted side affects, but does not name what they might be. Can you please be more specific.

It has been recommended to me by the acupuncturist that I go to, to take six tablets a day…way over your recommended 1/day. How can that adversely affect my system?

I would suggest to ask a naturopathic ND… however if the acupuncturist they study recommend this product. Depending on your condition. some of standard process products are used 12 a day, depending how ur feeling , illness etc.