Elavil (generic: Amitriptyline) is now a discontinued prescription drug in the United States that used to be prescribed for mental and mood problems such as depression.[1] However, the brand name Elavil is still available outside of the United States. For instance, in Canada, Elavil is made by Rexall Pharmacy Group Ltd.

Amitriptyline may help increase energy level, improve mood and feelings of well-being, relieve anxiety and tension, help you sleep better. Elavil is a tricyclic antidepressant. It works by modifying the balance of specific natural chemicals (neurotransmitters such as serotonin). 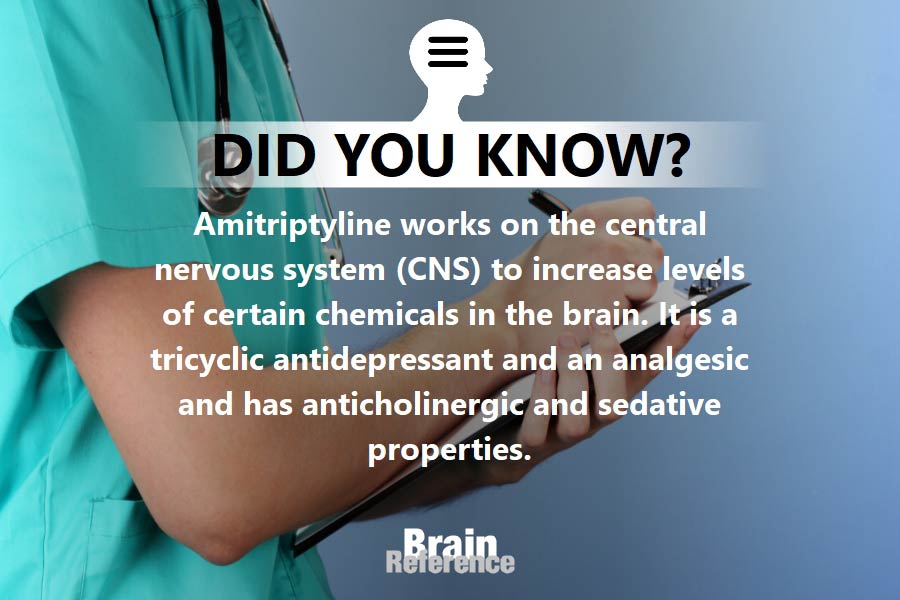 Other uses include prevention of migraines, treatment of neuropathic pain such as fibromyalgia and postherpetic neuralgia, and less commonly insomnia.[4]

2) The Company Behind Elavil

As of February 2020, Amitriptyline was marketed under numerous brand names worldwide alone and as a combination drug with each of medazepam, perphenazine, and chlordiazepoxide.

In 2003, the FDA requested the British-Swedish multinational pharmaceutical and biopharmaceutical company AstraZeneca to discontinue Elavil in the United States due to GMP problems.[5]

3) Details on Elavil Ingredients and Uses

Amitriptyline (pronounced: a-muh-trip-tuh-leen) is an earlier class of drugs called tricyclic antidepressants (TCAs) and one of the first medications intended to treat depression and anxiety. However, the substance can also be commended for chronic pain, discomfort, sleep, and improved ADD/ADHD symptoms.[6][7][8]

Elavil works by increasing the amount of the neurotransmitter serotonin. Serotonin is a chemical that the brain sends out to nerves in the body. It’s believed to improve the way your body responds to mood, quality of sleep, pain, and emotional state.[9][10]

By increasing your serotonin levels, Amitriptyline should change your body’s reaction to pain. The low dose won’t treat depression, but it should improve your sleep, relax your muscles, and alleviate pain.

Doctors prescribe Elavil to treat depression in adults. They may also recommend the medicine in ways that the FDA has not yet approved, known as off-label uses.[11] For instance, a physician may prescribe Amitriptyline as an off-label treatment for: 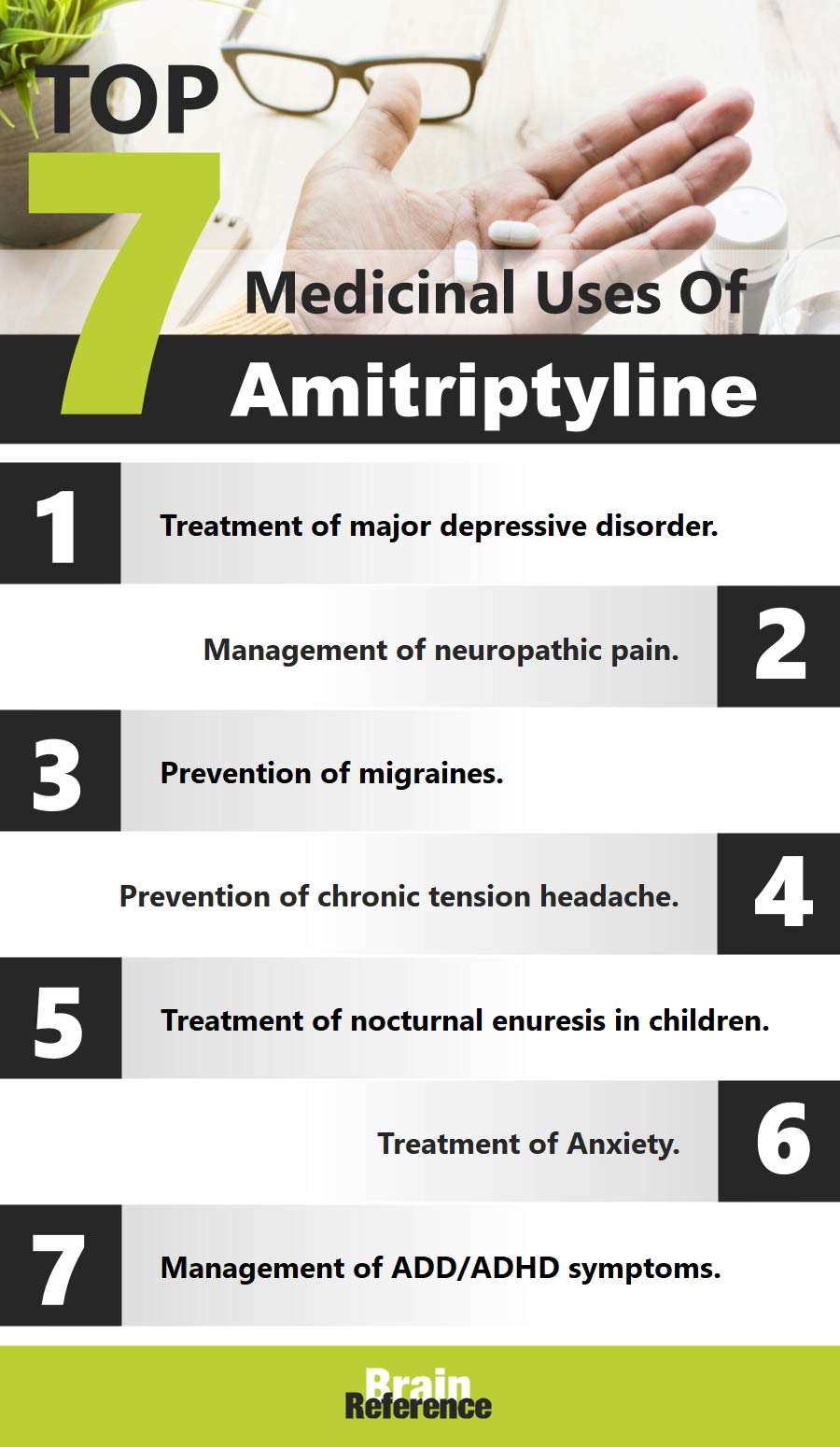 Some Elavil (Amitriptyline ) claimed benefits[12] include:

Elavil (Amitriptyline) is known for causing more side effects than your average prescription medication. Some of these side effects[13][14][15][16][17] include:

Although less common, the following side effects may also occur:

In some rare cases, Amitriptyline may cause the following severe adverse reactions:

7) What You Need to Know Before Taking Elavil

Tricyclic antidepressants like Elavil (Amitriptyline) can be deadly if the patient takes them with monoamine oxidase inhibitors (MAOIs)[18][19][20]. Although MAOIs are an older type of prescription antidepressants that have been phased out by most medical doctors, some may still prescribe MAOIs when modern antidepressants prove ineffective.

For that reason, we advise caution if you are already under treatment with monoamine oxidase inhibitors. Taking MAOIs with Elavil or other tricyclic antidepressants can lead to hazardous effects, including severe convulsions, high fever, severe convulsions, and even death.

Some of the most commonly prescribed MAOIs include:

Elavil may also cause severe reactions[21][22] when a patient uses it in combination with other antidepressants, such as:

Elavil RX pills cost anywhere between $40 to $80 for a supply of 100 tablets. The price may vary depending on the pharmacy you are buying from.

9) Where to Buy Elavil in the United States?

Elavil RX is no longer available in the United States, but it can still be purchased online from stores from Canada, EU, Australia, etc. However, we do not recommend purchasing Elavil RX online without a medical prescription.

Elavil is a moderately priced antidepressant. Furthermore, the generic form of Elavil (Amitriptyline) is even more inexpensive.

Most prescription plans and health coverage programs will pay for this particular medication. However, please take into consideration that Elavil may no longer be under production. While the formula is still available for purchase (within the United States only), we firmly recommend our readers to analyze the situation with their doctor before starting treatment.

Because Elavil is a prescription medication, we can only review other prescription medicines as potential alternatives. We don’t advocate substituting a treatment directed by your medical doctor with an over-the-counter dietary supplement.

Endep (Amitriptyline)[23] is another tricyclic antidepressant used to treat mood and mental problems such as anxiety and depression. It may help relieve tension, improve feelings of well-being and mood, help you sleep better, and boost your energy level.

Tofranil (Imipramine) is prescribed primarily in the treatment of depression.[24] It may also be effective in treating panic disorder, anxiety, and nocturnal enuresis (bedwetting) due to its ability to reduce the time of delta wave stage sleep, where wetting occurs.

Norpramin (Desipramine) is prescribed to treat major depressive disorders and ADD/ADHD.[25] It is also used to increase energy levels, improve sleep quality, elevate mood and appetite, and restore your interest in daily living.

Take Elavil by mouth, typically one to four (4) times daily or as directed by your physician. If you take only one (1) tablet daily, take it at bedtime to help lessen daytime sleepiness.

14) What the Customer Elavil Reviews Say

"It got rid of mine! I've tried many meds over the years with various side effects. This is the only one that got rid of my anxiety and depression and gave me no side effects. Not to mention, I sleep better on it. " [Read full review]

"Keep you from wanting to kill yourself, make you feel more comfortable. Just meadows you out keeps me from having back flashing. The first time I didn't like adverse side effects, the doctor gave me 50mg a day, but I take 50mg bedtime, then cut the pill in half late morning and early evening." [Read full review]

"I was prescribed Elavil for depression and migraine prevention. After taking only two 10mg doses of Elavil, I had a severe manic episode. (Note: I am not bi-polar.) I was shaking, pacing, unable to sleep, talking a mile a minute but making no sense, full of anxiety and rage, unable to eat or keep anything down and in a total panic." [Read full review]

Elavil can be an effective way to help manage chronic pain and depression. However, it’s important to recognize that abuse of any prescription medicine can be dangerous and lead to severe addiction.

Talk with your doctor about how long it may take for Elavil (Amitriptyline) to start improving your symptoms. If it seems like the medication isn’t working, tell your physician as soon as possible. There may be other alternatives to treat your condition. 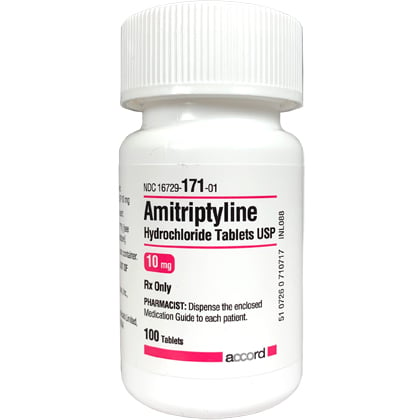 Customers Questions and Answers with Elavil

clear
Q:
What are the active ingrediens in Elavil?
A:

Elavil (generic: Amitriptyline) is now a discontinued prescription drug in the United States that was used for mental and mood problems such as depression, anxiety, ADD, ADHD.

Q:
What are the side efects of taking Elavil?
A:

Q:
What is the best place to buy Elavil
A:

Elavil (Amitriptyline) was discontinued in the United States, and it's no longer available in pharmacies.

Q:
What is the cost of Elavil
A:

Elavil RX pills are still available in stores and pharmacies in Canada for anywhere between $40 to $80 for a supply of 100 tablets.

Q:
How can Elavil help my brain?
A:

Q:
Can I take Elavil with a prescription?
A:

As with all prescription medication, we advise caution when taking Elavil with other prescription medication or over-the-counter dietary supplements. Drugs that may interact with Elavil include monoamine oxidase inhibitors (MAOIs), Fluvoxamine (Luvox), Phenobarbitals like Solfoton and Bellatal, sedatives, Fluoxetine like Sarafem and Prozac, Citalopram (Celexa), Paroxetine (Paxil), Sertraline (Zoloft), and Other selective serotonin reuptake inhibitors (SSRIs).

Q:
Does Elavil work better if taken in conjunction with other supplements?
A:

Many other prescription medications may affect the way Elavil (Amitriptyline) works. The drug could also affect other medicines. It's imperative to let your physician know about everything you are taking, including any over-the-counter (OTC) medications, herbs, dietary supplements, or illegal drugs.

Q:
Is Elavil recommended for children?
A:

Elavil is not prescribed to children under the age of 18.

Q:
Are Elavil ingredients safe?
A:

Elavil only contains one active ingredient in the form of Amitriptyline. This chemical compound was studied across multiple clinical trials, and it was shown to cause mild, moderate, and even severe side effects in some patients. We recommend reading the full list of potential side effects available on our website.

You should not be taking Elavil unless it was prescribed to you by a physician.

Q:
Can pregnant or nursing women take Elavil?
A:

Elavil is a US FDA pregnancy category C drug, and it should be used during pregnancy only if the benefits overbalance the fetus's risk.

Q:
How much Elavil should I take a day?
A:

Take Elavil by mouth, typically one to four (4) times daily or as directed by your physician. If you take only one (1) tablet daily, take it at bedtime to help lessen daytime sleepiness.

Q:
What is the fastest way of contacting Elavil customer support?
A:

You can contact the Rexall Pharmacy Group customer support department by phone at 1-877-378-4100 (Monday to Friday 9 AM - 5 PM EST), mail at 5965 Coopers Avenue, Mississauga, ON L4Z 1R9, or by using the contact us form available on their official website.

As Elavil (Amitriptyline) is a prescription medication, please discuss any possible returns or refunds with the doctor who prescribed it.

Q:
What other people say about Elavil?
A:

While Elavil may be effective at dealing with anxiety, stress, PTSD, depressive disorders, pain, and insomnia, many users complained about the drug's lack of effectiveness when it comes to conditions such as Vulvodynia, Fibromyalgia, or Chronic Myofascial Pain.

Q:
Who is the company behind Elavil?
A:

Elavil (Amitriptyline) is no longer produced in the United States. However, the drug is still available in Canada, the EU, or Australia. One of the companies that still make this prescription drug is the Rexall Pharmacy Group.