Congaplex Review – Is it Effective?

The immune system represents a complex organ, cell, and tissue network whose cells specifically focus on defending the body against microscopic invaders. However, the body is often exposed to lifestyle and environmental stressors which may impair immune function, hence the need for added support.

Congaplex is designed as a homeopathic remedy that the human body can utilize to boost and maintain the immune system, promote thymic health, and offer antioxidant support.

It is currently produced and distributed by a business called Standard Process, which was founded in the United States.

Congaplex claims to contain essential vitamins, minerals, and a proprietary blend of animal and plant extracts that provide multiple benefits to users, but do these ingredients work? Who can benefit from taking Congaplex?

Keep reading this article to find out all that and more.

Congaplex features essential minerals and vitamins that sustain and enhance the production and protection of immune system cells. It also contains other components to provide the body with antioxidants and improved energy metabolism.

Its ingredients target the immune system and work to boost its health and functions by protecting against free radical damage and promoting immune cell production and function.

Congaplex is claimed to be beneficial to adults and children both and may help fight infections and prevent common colds and prevent their recurrence.

Standard Process manufactures products that have had increased popularity among users since its start in 1929. Its products are divided into three product lines: MedHerb, Standard Process whole food supplementation, and Standard Process Veterinary Formulas. Many of its customers report positive effects on both short-term and long-term usage.

Standard Process distinguishes itself from the crowd by manufacturing homeopathic remedies and specific-condition formulations that benefit the human body’s widespread areas and focus on quality rather than quantity in their ingredient choices and manufacturing processes.

Vitamin A is essential for normal cell growth, differentiation, and communication and is involved in immune function.

Vitamin C supports immune system defense by enhancing innate immune pathways, contributing to the formation of protective epithelial barriers, and enhancing the phagocytosis of foreign bodies. It also acts as an antioxidant and supports adaptive immunity by enhancing the growth and differentiation of B and T lymphocytes.

Some research has shown that the combination of Vitamin A and Vitamin C usually enhances support for lymphocyte and natural killer cell division and replication.

Another component of this remedy is Calcium which acts as a cell-signaling molecule that triggers T-cell activation. This ingredient supports bone structure and function and helps regulate several enzymatic reactions in the body.

Dietary RNAs help the body maintain a healthy supply of nucleotides that can be used to make RNAs vital in protein synthesis.

The other ingredients in Congaplex contain important molecules and phytonutrients that offer antioxidative support and stimulate healthy immune responses.

Other Standard Process products like Drenamin for adrenal fatigue also contain some of the core ingredients found in Congaplex.

Congaplex primarily benefits the body by

5) Is Congaplex Safe for Everyone?

Congaplex contains ingredients that are generally safe for use as recommended.

Congaplex contains many beneficial vitamins and extracts but may not be suitable for vegans and vegetarians as it contains animal products.

7) Where to Purchase Congaplex Online

Congaplex is available for purchase on Amazon and select retailers accessible through the company website.

8) How Much Does Congaplex Cost?

Available for purchase in both 90 and 150 capsule bottles, Congaplex is generally considered an affordable product. A 150-count bottle of Congaplex costs typically $44.64 but may vary by retailer.

You should take three Congaplex capsules per meal, or as directed by your physician.

11) Our Final Take On Congaplex

Overall, Congaplex represents a blend of minerals and multivitamins that should help improve the immune system and concentrates on preventing or treating common colds or sinus infections.

It is especially recommended for people leading stressful lives or following a poor diet because it can improve the body by preventing and fighting the damage done by free radicals.

Standard Process claims that Congaplex is safe enough for children and can offer noticeable benefits in a short time frame. However, these results may vary by the individual due to unique body mechanisms and functions. Note also that this supplement is not intended to diagnose or cure any medical illnesses and should only be used as recommended for maximum results. 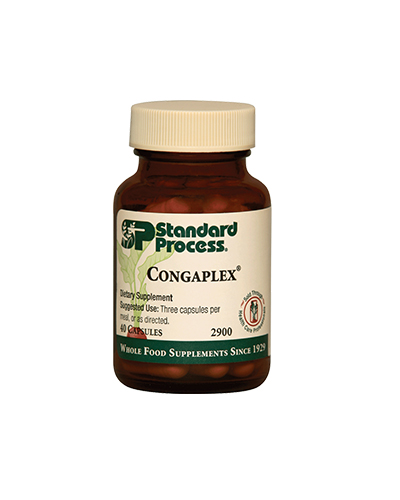 Q:
Congaplex is all about what?
A:

Congaplex is a dietary supplement composed of essential vitamins, minerals, and a proprietary blend that protects the body from oxidative damage and boosts the immune system.

Q:
Where can I buy Congaplex?
A:

Congaplex is available for purchase on Amazon and select retailers accessible through the company website.

Q:
How much does Congaplex cost?
A:

All in all, Congaplex is a blend of multivitamins and minerals that should help enhance the immune system on short-term periods. It focuses on treating or preventing common colds or sinus infections. It is recommended particularly for people leading stressful lives or having a poor diet because it should offer health to the body when it comes to lowering the damage done by free radicals. It is usually found at affordable prices, and people may purchase a bottle either for 15 or 50 days of treatment, depending on their desired results. Although it can be used by children, it is not a good choice for vegans or vegetarians due to the animal extracted compounds.

Q:
Are there any dangerous ingredients in Congaplex?
A:

Congaplex' ingredients are generally safe for use as recommended.

Q:
Who uses Congaplex?
A:

People looking to build their immune system and reduce the frequency of colds and infections use Congaplex to stay healthy.

Q:
How should I take Congaplex
A:

You should take three capsules per meal, or as directed by your physician.

Q:
How do I contact Congaplex customer service?
A:

Q:
Can I return Congaplex?
A:

Return options for Congaplex may vary by retailer; however, Standard Process accepts returns with terms and conditions applying.

Q:
What do Congaplex reviews say?
A:

Congaplex has over 1,000 5-star reviews on Amazon. Many Congaplex users claim that it has helped them improve and build their immune system and fight off illnesses.

Q:
Who makes Congaplex?
A:

Question: what would be the recommended dosage for children taking the Congaplex Chewables? 2-4 years old

Title for your comment
Dosage for Children
Have you tried this product?
Yes
Reply
Benny

This stuff is the single greatest alternative to antibiotics. I’ve been using it for over 10 years and still get the same 3-5 day results as antibiotics without the side effects or a doctors visit. Antibiotics make me nauseous and caused me serious lasting digestive issues, not to mention the more you take them the worse your immune system gets. Next time you’re feeling sick just buy the small bottle and take 3 capsules with every meal, the sooner you start them the faster they work. Congaplex for the win!

Title for your comment
Yes it really works
Have you tried this product?
Yes
Reply
Carlos S. Mayers

This product is the best. I think the whole foods approach is what makes it so effective.

I’ve used Congaplex for three years now. Imagine the benefits of antibiotics without the side effects (i.e. yeast infections for women, constipation, moodiness). I was taking several antibiotics per year for sinus infections and upper respiratory infections, but it has been four years since I used an antibiotic.

Question: I have been taking Congaplex on a short term basis. Is excessive urination a side effect of taking the supplement. Thanks

The most commonly reported side-effects of Congaplex Capsule are nausea, kidney stones, vomiting at a higher dosage, constipation, disturbance in heart rhythm, and slow heart rate. Some of the side effects are serious but rare which include itching of the skin, allergic reaction, swelling of face or lips, scaly skin and feeling of warmth.

Is it safe to take alongside a prenatal supplement? Also, can I take Congaplex while nursing? My nurslings are 2.5 year old twins that only nurse 2-3 times a day.
Thanks,
Jill

We recommend consulting your health specialist if you are pregnant or a nursing mother.