Piracetam Review – 8 Things You May Not Know

Piracetam is a nutritional supplement offered as an effective support for healthy cognitive and cardiovascular function. The formula is offered by CTD Labs, a company founded in 2006 as a manufacturer of fitness formulations. The producer claims to be dedicated in serving the best interests of their clients by investing only in innovative products of the highest quality.

Piracetam is designed to help adult individuals interested in maintaining cognitive and cardiovascular health, using a formula based on a very popular ingredient form the Nootropics class of compounds. This substance is called Piracetam and is advertised as extensively recommended by healthcare specialists and organizations throughout the world. Piracetam is a derivate of an important inhibitory neurotransmitter occurring naturally in the human body known as GABA.

The claimed benefits of Piracetam can be observed on multiple levels including on the cerebral circulation and mental energy, neuron communication, speech, thinking capacity and ability to be more creative, and blood flow in the brain. It also offers a proper neuro-protection and antioxidant defense by strengthening the neurotransmitter receptors. The formula is also offered in the form of Piracetam Powder featuring a dose of 1000 mg of active substance per serving.

Although Piracetam is still sold as a dietary supplement by some consumers, it seems like the FDA is currently trying to include products based on this active substance in the prescription drugs category. Many producers recommend their clients to only take this type of supplements under the strict supervision of a healthcare practitioner and following the prescribed doses.

Piracetam is based on a single active ingredient generically known as Piracetam. Its scientific designation is 2-oxo-1-pyrrolidineacetamide.

Piracetam is commonly described as a psychoactive drug. Piracetam effects are in stimulating the brain’s activity by acting on the Corpus Callosum, a part of the brain responsible for the communication between the two hemispheres of the brain. The products that include this substance as an active compound are commonly known as smart drugs (Nootropics) and are classified as highly potent products that have a simultaneous influence on a large number of physiological systems. This type of products is used on a large scale today in the treatment of various conditions including Alzheimer’s disease, myoclonus, dyslexia, Down’s syndrome, anemia, amnesia, heart disease, and other diseases related to the circulatory system. The major concern with these drugs is that studies involving Piracetam have not been conclusive in most of the claims (and the majority of trials did not involve human subjects). Piracetam side effects, warnings and drug interactions is another concerning issue. Human studies are currently conducted trying to determine the actual benefits of Piracetam in the treatment of specific conditions (such as myoclonus). The combination between Piracetam and Choline (a natural substance made in the liver) has also been shown to have increased effectiveness in improving information retention capacity in rats. Although there is a lot of controversy around this nootropic substance, there are also a lot of voices that support the health benefits of such a compound.

Such supplements are not recommended for the following categories of people: pregnant and nursing women, people with blood clotting problems or those who have recently undergone a surgery, people suffering from kidney, liver affections or those with known allergies. Those who are already under other medication should warn their healthcare practitioner before starting a treatment. The most common side effects reported are nervousness, weight gain, and hyperactivity. Other more uncommon adverse reactions are depression, sleepiness, bleeding problems, anxiety, nausea, and bleeding problems.

3) Does Piracetam Work and it is Safe?

Piracetam has been used for over 35 years. It was first synthesized in 1964 by a team of scientists led by Dr. Corneliu E. Giurgea at UCB (and Belgian pharmaceutical company). The first Piracetam (trade name “Nootropil”) supplement was produced by UCB in the early 1970’s and is currently in use in many countries.

This brain supplement has been shown to be effective for healthy people and for those who experience deteriorating brain conditions. However, it is important to know that Piracetam is no longer marketed as a dietary supplement in the US, and it cannot be sold in Canada (it can only be imported for personal use). Piracetam is still available for purchase in Europe and other parts of the world.

Unfortunately, just as with many other similar drugs, Piracetam’s mechanism of action is not entirely understood. It is believed to influence neuronal and vascular functions and support cognitive function without acting as a sedative or stimulant.

Piracetam has been associated with several side effects. Most of these side effects fall under the category “mild and transient.” The most common side effects of Piracetam are general excitability, including anxiety, insomnia, irritability, headache, agitation, nervousness, and tremor, which were occasionally reported.

There are testimonials online about Piracetam. What is being stated includes the following:

One bottle of Piracetam from CTD Labs contains 240 capsules, which should be enough for two months of treatment at a recommended dosage of 3 to 4 capsules per day.

This is a moderately-priced supplement, but the fact that Piracetam is no longer recognized as a dietary supplement in the US makes it difficult to purchase. We advise our readers not to buy this product from questionable retailers.

7) How to Take Piracetam

A unanimous opinion regarding Piracetam dosage in terms of safety has not been issued. Piracetam is currently discontinued by the manufacturer.

Piracetam is advertised as a potent formulation that addresses the specific needs of adults particularly those related to cognition and cardiovascular system. Although the supplement is described as a perfectly safe product that acts on multiple levels to improve the user’s health, taking a closer look at the active substance, it seems that Piracetam is considered rather unsafe when used as a nutritional supplement. In its attempt to reclassify Piracetam as a prescription drug, the FDA has been trying to retract all dietary supplements containing this substance off the market. GNC Lab’s formula seems to also be discontinued at the moment at this review.

Still, a large number of people support formulations such as this for its numerous benefits claiming that the Piracetam’s positive effects on the overall health outweigh the potential side effects. These allegations are not supported by conclusive evidence of current scientific research. 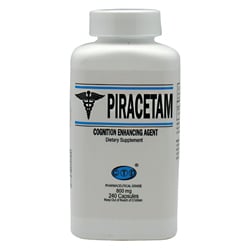 clear
Q:
What are the active ingrediens in Piracetam?
A:

Q:
What is Piracetam?
A:

Piracetam is a brain supplement designed to support healthy cognitive and cardiovascular functioning, manufactured by CTD Labs. It enhances brain metabolism, increases cerebral phospholipids and cellular membrane fluidity, supports cognitive receptors, inhibits platelet aggregation and has significant antioxidant effects. Piracetam has been shown to be safe and effective in healthy people as well in the older population or those with deteriorating brain conditions. It may present mild side-effects like general excitability, including anxiety, insomnia, irritability, headache, agitation, nervousness, and tremor. The drug has been banned in the USA by the FDA, but is still available for purchase in Europe and other parts of the world.

Q:
Does Piracetam work?
A:

Piracetam is considered a safe product; however, the FDA does not recognize it as a dietary supplement and penalizes manufacturers that market it as such.

At the time of this review, CTD Sports has discontinued production of Piracetam formula for undisclosed reasons. The fact that FDA decided to include Piracetam in the “drugs” or “prescription medicine” class might be one of the main reasons CTD Sports decided to discontinue their production of Piracetam. However, this is merely a presumption, as no official statement has been issued by CTD Sports regarding its discontinuing, the reasons behind this decision, or the date (if it is established) when the formula will be back on the shelves.

While it was available for purchase, the product was associated with an affordable price, which made it a strong competitor for other similar supplements. The product was also manufactured by a company with an excellent reputation.

Overall, this brain supplement may be appealing for those who seek a potent formula to enhance their cognitive function. Still, we recommend asking a professional's opinion before starting any medication therapy.

I started Piracetam on a Friday. I felt like I slept better and during waking hours, I didn’t stress as much about things. I was very “mellow”.

I\’m a bit compulsive and impulsive and piracetam helps suppress these flaws. It also helps me to push my body during running by allowing me to control my emotions to quit.

Piracetam conjures me to be creative. Thats roughly the extent to what it does for me.

Piracetam is the best Nootropic I have used! To get the best benefit, a person must cofactor with Omega3, Magnesium, Lecithin, B complex etc. All things work synergistically!

Piracetam is interesting, although I do think that the term “brain stimulant” is a bit of a misnomer. Piracetam’s effects really do not fit the criterion of your typical “upper” or “downer.” If you take this stuff expecting a pick-me-up, then you may be sorely disappointed. I would describe the physical and mental state that piracetam induces as being one of well-rested wakefulness. It’s overall impact is defiantly worth noting, but it is inherently very transient and ambient. It is but a background drug. Many of the differences between your mind on and off of piracetam may not be obvious as they are occurring, though I will say that they often reveal themselves to you in retrospect.

Also consider that you will want to be supplementing your diet with some sort of choline precursor if you are looking to experience any noteworthy effects from piracetam. Personally, I find that 200mg of DMAE makes all of the difference.

Bear in mind that most of the effects that your average, healthy adult is looking to get out of piracetam are highly subjective and the only evidence of their existence lies in anecdotal reports. The only real, proven benefits that have been found to correlate equivocally with the administration of piracetam involve subjects with brain malfunctions. If you’re healthy, take piracetam, and feel nothing, then it’s not because it doesn’t work period–it just doesn’t work for you because obviously, you don’t need it. Move on and don’t trash a drug that helps other people every single day. Wait for the results to come in before completely seeing it off. There is still much that needs to be analyzed.

You can definitely notice the benefits. It is important to start slow and then build your way up to see how you tolerate it.

I am agree with you that piracetam is a one of the best supplement to treat brain related problems.piracetam is a only drug that can work independently and sync with other smart drugs.

Those of you who have taken it, can you include the dose and how many days you took it…..and if possible what other supplemnts were you taking? i heard it’s best to take piracetam w/ choline and b vitamins.

A very good supplement.
I am very dubious about supplements. Ginko, brahni and most so called brain improvers
Have done zero to ether my mood, mental abilities or productivity.
With piracetim I have noticed definite but subtle Improvements. It is not obvious and seemed to only start to work when I took it with 5 htp and choline. Taken those alone I did notice improvements in sleep and strangely more vivid dreams.