Resveratrol is a dietary supplement designed to fight the harmful effects of free radicals due to its powerful antioxidant qualities. The formula manufactured by Healthy Origins is hence able to provide effective support for healthy normal aging processes.

The manufacturer is an American company founded more than 15 years ago. The company’s headquarters is located in Pittsburg and its products are claimed to use raw materials with reliable origins. The manufacturer takes pride in providing formulations that are manufactured in compliance with the current FDA directed GMP guidelines.

The formula is addressed to those individuals interested in keeping their overall health, and in reducing the negative impact of free radicals and oxidation processes on the human body. Resveratrol is vegetarian and free of most common allergens, hence can be successfully used by special categories of consumers.

1) Resveratrol at a Glance

Resveratrol is an herbal based dietary supplement based on a Resveratrol extract. The formula is free of sugar, salt, yeast, wheat, gluten, soy, barley, fish, shellfish, nuts, tree nuts, egg and dairy products, preservatives, artificial colors or artificial flavors.Resveratrol is a polyphenol extracted from the Japanese Knotweed grapes. The formula is marketed to contain 300 mg of the biologically active form, trans-Resveratrol. This belongs to the class of polyphenols, which are believed to be very powerful antioxidants and are used to treat disorders of the circulatory system, heart conditions and even in the treatment of cancer.

The Resveratrol extract has also been touted for potential benefits in the treatment of neurodegenerative disorders like Alzheimer’s disease, as it appears to play an important role in inhibiting the formation of protein deposits in the brain associated with Alzheimer’s, Huntington’s and Parkinson’s disease.

However, most of the research done so far has been done on animals. More so, Resveratrol is not an FDA-approved substance, so there is no specific dosage recommendation (the concentration varies depending on the manufacturer). Resveratrol is considered potentially safe but it may interact with blood thinners such as Warfarin and non-steroidal anti-inflammatory medications.

2) What Are Resveratrol Ingredients?

Resveratrol is also used in some memory supplements like Memorall.

Resveratrol is an herbal based nutritional supplement. It is based on a single active ingredient – the extract of Polygonum cuspidatum. Resveratrol is part of a group of compounds called polyphenols. They are believed to be very powerful antioxidants and are used to treat conditions such as cancer, neurodegenerative disorders, and circulatory and heart-related disorders.

Resveratrol has also been studied to prove its benefits in the treatment of neurodegenerative diseases such as Huntington’s, Parkinson’s and Alzheimer’s disease (by inhibiting the formation of protein deposits in the brain associated with Alzheimer’s). However, most of the scientific studies conducted so far have been on animals, and Resveratrol’s benefits on humans are still a matter of debate. This is not an FDA-approved substance, and there is no specific dosage recommendation (as the concentration may vary from manufacturer to manufacturer). It is believed that Resveratrol may interact with blood thinners like Warfarin and anti-inflammatory medications (non-steroidal) such as ibuprofen and aspirin.

Resveratrol is recommended as a dietary supplement in doses of 1 vegetarian capsule daily or as recommended by an informed healthcare professional. There are testimonials posted online about Resveratrol:

However, their number is fairly limited and may not suffice to draw a general conclusion towards the formula’s Effectiveness.

Resveratrol can be found in bottles of 7, 60 or 150 V-caps. The price for one month’s supply is rough $15. Hence we may conclude the product is pretty affordable.
The manufacturer offers no free trial and shipping charges vary from $2 to $6.50 on the US territory with discounts offered for orders larger than $100. Online purchasing is secured through an SSL Web Server Certificate.

The manufacturer does not mention any money-back guarantee but does offer the opportunity of purchasing a bottle of 7 V-caps to test the efficiency of their product without spending the money for a month’s supply.

Resveratrol is recommended as a dietary supplement in a dosage of one V cap/day.

Resveratrol is a product based on a grape seed extract and contains a high quantity of trans-Resveratrol, considered responsible for the antioxidant properties of the product.

Resveratrol has gained considerable attention as a powerful natural antioxidant and is widely researched to prove its effectiveness as an antioxidant. Opinions from the consumers regarding this formula are generally positive in terms of value for money and general effectiveness. However there are only a few reviews available online and there have been some complaints about the delivering period which is too long. Additionally, there are concerns regarding Resveratrol interfering with certain types of medication, hence we recommend caution. 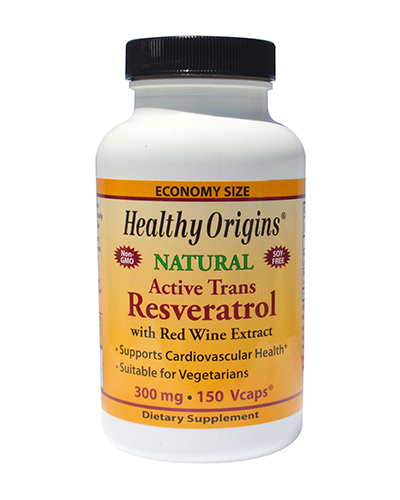 clear
Q:
What are the Resveratrol ingredients?
A:

Q:
What is Resveratrol supplement?
A:

Resveratrol is a dietary supplement offered as a powerful natural antioxidant which may also help maintain a healthy circulatory system and prevent platelet aggregation. The product is manufactured by Healthy Origins, an American company with over 15 years of experience in the nutritional supplements industry. The active substance is trans-Resveratrol and has been used in the treatment of neurodegenerative disorders such as Huntington's, Parkinson's and Alzheimer's disease, circulatory problems, heart conditions and certain types of cancer. Resveratrol is designed for adults only.

Q:
Are Resveratrol benefits actually a reality?
A:

Resveratrol is an excellent product based on the Polygonum cuspidatum extract, which contains a large percent of trans-Resveratrol. This is the active form of the antioxidant Resveratrol and is advertised as effective in promoting better circulation and fighting against cell damage caused by free radicals during oxidation.

The formula is also marketed as free of sugar, salt, allergenic compounds, preservatives, artificial colors, and flavors. The formula is not clinically researched meaning that the claimed benefits have not been proven through any trial and are inconclusive. Consumers have positive opinions about the product's Effectiveness, although there have been some complaints about the delivering period.

It seems like a good product. I have taken other supplements from this same manufacturer and I was satisfied with the results.

The formula is not expensive at all and it seems to work so far. I have definitely been feeling more energized since I started using it three weeks ago.