Petadolex is a dietary supplement promoted to be effective in both prevention and in fast-acting reduction of the frequency and severity of migraine attacks. The manufacturer, Enzymatic Therapy, claims the supplement has been available in Europe since 1972 and has been used by more than 1,000,000 people since.

This formula is offered by Enzymatic Therapy. The company manufactures numerous products for different health segments and conditions, such as heart, energy support, weight management and children especially designed products. The company has received numerous awards for some of its products (2009 Best of Supplement Awards for Remifemin, Whole Body Cleanse and DGL Ultra).

Petadolex is recommended for both adults and children being a safe, pure and well tolerated formula. Pregnant and nursing women are advised not to take the formula, and patients on prescription drugs should consult a healthcare practitioner prior to use.

The product reviewed her contains a single herbal formula from the standardized extract of the Purple Butterbur plant (Petasites hybridus) designed as a fast-acting migraine relief.

Butterbur contains petasins, active ingredients which supports a natural anti-inflammatory response and may relief spasms. Some Butterbur preparations contain chemicals called pyrrolizidine alkaloids (or PAs), which have been proved to damage the liver and cause other serious harm. This supplement is PAs free.

The plant has been traditionally used as an herbal remedy for conditions like pain, fever and spasms. Modern research and clinical trials have shown it acts effectively on migraine headaches in two ways: one, by lowering the inflammatory effect of chemicals like the prostaglandins and two, by functioning as a beta blocker which results in the normal flow of blood to the brain. Hence, blood pressure and spasmodic capillary action, usually associated to the onset of migraine headaches, are under control. Mild stomach upset has rarely been reported as side effect.The formula does not contain gluten yeast, corn, dairy products or any artificial colorings, flavorings or preservatives.

2) Details on Petadolex Ingredients and Uses

Containing a single herbal formula from the Purple Butterbur plant extract, Petadolex was created to fight against migraines. Evidence has revealed that Butterbur contains pertains as active ingredients, thus helping relief spasm by supporting a natural anti-inflammatory response. However, some preparations based on Butterbur contain chemicals known as pyrrolizidine alkaloids that may damage the liver or cause some serious harm to the human body. Compared with similar dietary supplements, this supplement is presented as free or pyrrolizidine alkaloids.

Although traditionally used as a natural remedy for conditions such as spasm, pain and fever, modern research based on clinical trials have discovered that it may act effectively on migraines in two ways. One of those is lowering the chemical inflammation effects, and the other one is working as a beta blocker, managing to achieve proper blood levels in the brain. Therefore, spasmodic capillary action, as well as blood pressure that is associated with migraines, should be under control.

Although this formula is mostly regarded as safe, mild stomach pains have been reported as Petadolex side-effects.

Petadolex reviews are fortunately available online. What is being reported includes the following:

Usually found for purchase on manufacturer website as well as other online retailers, the supplement represents a moderate priced remedy. Available in bottles that contain 60 capsules, positive customer reviews recommend it as an affordable product. A bottle is sufficient for thirty days of treatment. Certain discounts or promotional offers may also be available, in which case the unit purchase price is further lowered.

Petadolexreviews report the product works to deliver on its benefit claims, also mentioning some side effects like stomach upset, strange taste in the mouth and light head feelings. The manufacturer recommends taking 3 soft gels for immediate benefit, followed by one additional soft gel two hours later.

Petadolex and its core active ingredient Butterbur has been tested through numerous large scale clinical trials in both children and adults and proven to reduce the duration of migraines and to provide fast relief. Consumer review also report excellent results with little side effects associated. Therefore, the product is highly likely to work for the majority of patients.

Petadolex is the brand name of the Butterbur standardized extract and hence is available on many manufacturers. The Enzymatic Therapy formula is a great choice, being safe, pure and free of allergens and artificial ingredients. Little side effects are associated to the formula; however it may interact to some prescription drugs. It is wise for you to consult a Pharmacist or a healthcare provider prior to use. 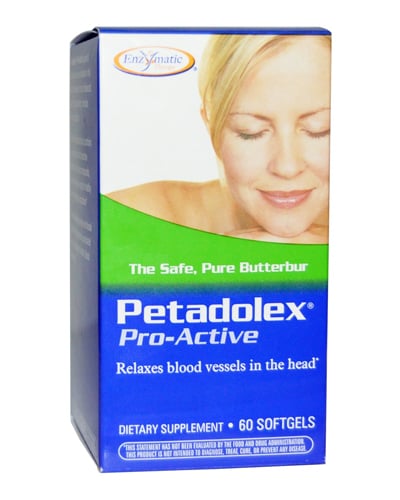 clear
Q:
What are the core ingredients in Petadolex?
A:

Q:
What is Petadolex supplement?
A:

Petadolex is promoted as a helpful solution in combating and preventing migraine attacks. The supplement is designed by the American company Enzymatic Therapy. The formula is based on an extract from the Purple Butterbur plant traditionally used to treat migraines and headaches, as well as other various conditions. The extract contains certain active substances that act as natural anti-inflammatories. Butterbur has been used traditionally to treat seasonal rhinitis, asthma, and as a cardiac tonic. However, the plant extract was also shown to contain harmful substances called pyrrolizidine alkaloids (PAs), substances that may cause irreversible damage to the liver. Enzymatic Therapy's formula is advertised as free of PAs, making it a highly safe formulation. Petadolex reviews from consumers are generally positive and available in large numbers.

Q:
Does Petadolex work?
A:

Being tested through various scale clinical trials in adults and children, the supplement has proven reliable when it comes to reducing duration and intensity of migraines and providing fast relief. Consumers have reported extraordinary results with little or no associated side-effects. Therefore, there is a possibility that this remedy will work for most of the patients.

Nonetheless, Petadolex represents one of the many brand-names of the Butterbur extract which has been standardized by many manufacturers. It can mean an excellent choice for people who seek for maximum brain circulation and who desire to get rid of their migraine, by being safe and free of artificial ingredients and allergens. Little to no side-effect is related to consumption of this product, but there is a small possibility of interacting with prescribed medication.

The doctor prescribed this formula as I was having migraines more and more often. He said that all his other patients were thrilled with the results. Well so am I! Not only do the migraine stop (in approximately 30 minutes after administering the pill), but they also seem to have reduced in number. And I don’t feel any of the side effects I read about on the internet.

Enzymatic Therapy Petadolex is one of the best remedies I tried so far. I suffer from severe migraines for many years and I literally used every single product out there to stop these terrible headaches. I have been using this product for 3 years now and is effective even from the first dose. If my migraine is very bad, I take another pill, and it completely disappears. Great supplement!