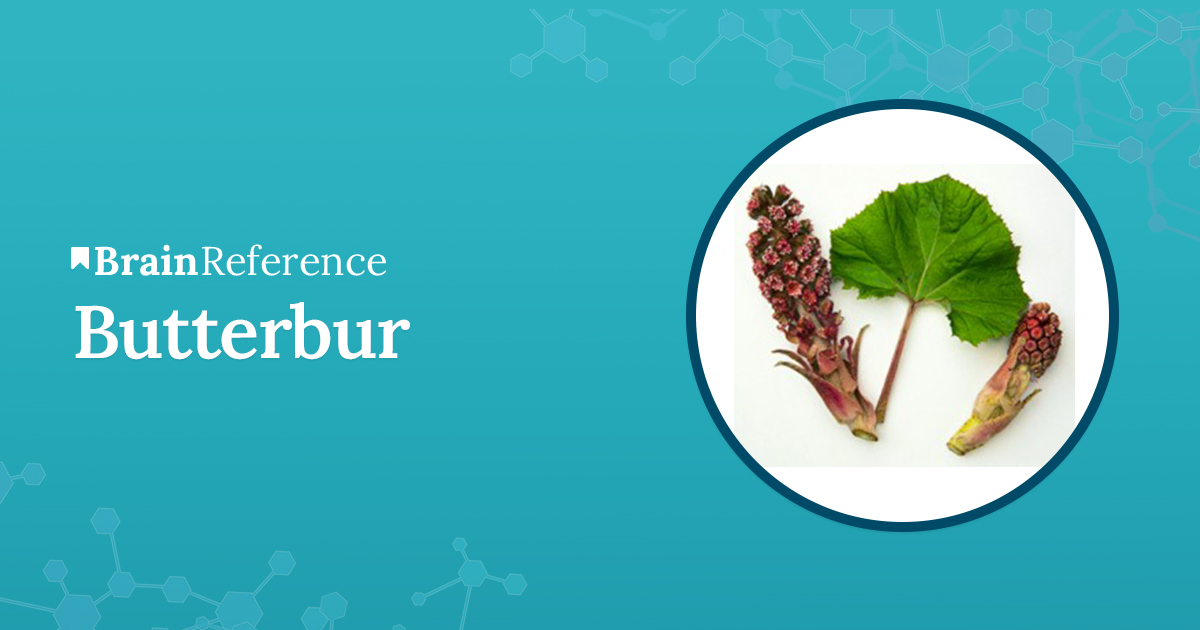 Butterbur is a type of shrub which grows in Europe regions as well as parts of North America and Asia, generally on a marshy ground in the west areas. The name “butterbur” comes from its traditional uses of wrapping butter during warm weather. Other common names for this plant are petasites and sweet coltsfoot as well as some forms of standardized extracts like Petadolex. Its Latin name is Petasites hybridus.

It can be recognized because it is robust and has a thick underground rhizome and Rhubarb-like leaves in its time of development. It can usually be found in the temperate region of Northern Hemisphere. Preferred environments include marshes, ditches, and riverbanks. Butterbur was initially utilized by Native Americans to treat medical issues such as inflammations and headaches.

Its beneficial effects are linked to its core active components which are isopetasin and petasin. The biggest concentration of these two substances is located in the roots of the herb, and they possess a significant role because they help decrease spasms, determine the muscles to relax and soothe the nasal membranes that are inflamed. Additionally, the anti-inflammatory and anti-spasmodical qualities of this plant have a reliable role in the calcium flow adjustment inside the organism.

As referred to studies conducted utilizing this herb to have scientific proof of its efficacy, there were a few that pointed out its positive impact on hay fever without the sometimes bothersome sedative effects that antihistamine cetirizine has. The American Headache Society and the American Academy of Neurology recommend the usage of this plant in treating and preventing migraines as a Level A pick due to certain clinical studies which revealed its beneficial effects in this area.

In the majority of cases the rhizomes, roots, and leaves from butterbur are utilized to make substantial extracts which are later included in tablets for medicinal purposes. Because of its palette of effects, among which some have been scientifically proven, nutritional companies have started adding this extract in natural remedies which target issues of the body such as allergy symptoms like itchy eyes, migraines, and asthma. There are even some products that can be applied directly to the skin and contain extracts of this herb as either a primary or an additional ingredient and whose purpose is to enhance wound healing. Unfortunately, insufficient research has been provided so far in this area, so there is no certainty of its effectiveness.

The major concern linked to the safety of butterbur is the fact that certain remedies feature pyrrolizidine alkaloids, also known by the name of PAs. These can severely damage the lungs, liver, and the blood circulation while in some cases can even lead to cancer. The remedies found on the market that contains pyrrolizidine alkaloids are viewed as unsafe when applied to damaged skin or taken by mouth. When products that contain PAs are applied to broken skin, the chemicals are easier absorbed by the organism, thus the damage will be of bigger proportions, and the risks of developing physical issues are higher than normal. Because of these concerns, it is advised to consume or apply to the skin only products that are labeled as “PA-free.”

Even though the natural remedies that are labeled as “PA-free’” are usually considered safe, even for children whose age is between 6 and 17 when the utilization doesn’t surpass four months of usage, there is still a possibility of side-effects appearance, particularly when the consumption isn’t done in accordance with the label descriptions. Some of these harmful side-effects include itchy eyes, asthma, fatigue, diarrhea, belching, upset stomach, drowsiness, and headaches. On the other hand, there is evidence that it causes less fatigue and sleepiness as compared to cetirizine. Additionally, these types of products may also determine allergic reactions in individuals that are usually allergic to herbs such as daisies, ragweed, or marigolds and, because of this, it is recommended to avoid any treatments that feature ingredients obtained from herbs to prevent possible future complications.

For women who are lactating or pregnant, products based on butterbur which has PAs are viewed as dangerous because they may cause liver damage and congenital disabilities while the ones which are free of PAs shouldn’t be taken either because there isn’t sufficient evidence that they’re entirely safe for the children.

Furthermore, there is a moderate interaction between remedies which contain extracts of butterbur and medication which enhances breakdown of some medication by the liver such as rifampin, phenobarbital, carbamazepine, and rifabutin. In conclusion, it is better to consult a personal healthcare before beginning any treatment that contains butterbur to avoid any possible side-effect.

Butterbur can be found in Europe, Northern Asia, and America, on marshy lands. However, because of its positive impact upon certain bodily areas or problems such as anxiety, migraines, and allergies, extract of this herb have been introduced in a variety of products which are destined to enhance the health of individuals on either general or particular way. Other places in which this herb can be found is supermarkets, markets, or other types of stores in the form of tea infusions which can also be used to treat or avoid the conditions as mentioned above. On the other hand, before picking any product that contains butterbur, people should make sure that they’re labeled “PA-free” and that they don’t have an allergy to it.

It is not an ingredient suggested for individuals who suffer from liver diseases, allergies to plants or for lactating or pregnant women because it may cause more harm than help. If any problem occurs while the following treatment or when consuming butterbur in another form, people should consult their personal doctor and immediately discontinue the usage.