Phrenilin is a prescription medication created as a treatment for tension headache. The formula is developed by Valeant Pharmaceuticals International a manufacturer of more than 80 drugs in the United States. The company markets and distributes their tis formulations internationally in the following geographic regions: USA, Canada, Latin America, Australia, and Europe (Central and Eastern).They claim to focus on the particular needs of each country and provide unique products for each of them, in the form of prescription drugs, branded generics, and over-the counter formulations.

Phrenilin is classified as an analgesic, and is based on the therapeutic effects of two active substances: Butalbital and Acetaminophen. This type of medication has been associated with several potentially dangerous side effects, including dependency and abuse (Butalbital is a habit-forming substance) and liver failure that may lead to death (associated with the use of Acetaminophen doses higher than 4,000 mg). Because of these high risks, the drug is not recommended for people suffering from conditions like severe impairment of the renal or liver function, people with acute abdominal conditions, or those with known allergies to any of the active substances.

The drug may also impair one’s mental and/or physical abilities and it should not be administered while driving or operating heavy machinery.

One of Phrenilin’s key ingredients is Butalbital. This is a substance form the Barbiturate class of compound and, as a pharmaceutical ingredient, is usually used in combination with other substances designed to reduce pain. The use of this substance against tension headache has been approved, but it is not recommended as a first-line treatment due to its numerous side effects. This chemical was reported to cause severe reactions like dependence and addiction to Butalbital, increased frequency of the headaches, and severe judgment impairment. Common side effects are nausea, sedation, drowsiness and dizziness, memory loss, and digestive problems. Mixing this substance with alcohol may lead to intoxication, respiratory depression and liver toxicity. Suicide or accidental death may also occur when mixing such a drug with other narcotics.

Acetaminophen is the US and Japanese adopted name for Paracetamol. It is classified as a mild analgesic recommended as a pain reliever in minor aches, including headache. However, the substance is also used in combination with opioid analgesics in which cases it may be recommended for the treatment of more severe conditions. Acetaminophen is generally considered safe when used in the recommended dosage, but may become fatal if these doses are exceeded, even by small amounts. The main worry with Acetaminophen overdose is liver failure, accentuated by the use of alcohol.

The substance is not included in the Nonsteroidal anti-inflammatory class of drugs. Although it has been shown to have similar analgesic properties as NSAIDs, its anti-inflammatory effects are considerably reduced compared to these substances.
While this substance is considered likely safe for short-term or occasional use, there are a few severe side effects that should concern and therefore be taken into consideration by consumers. Aside from the liver damage, the substance may also increase the risk of blood cancer and or cause severe skin reactions (the Steve-Johnson syndrome).

Phrenilin side effects include similar reactions to those caused by the active ingredients: drowsiness, shortness of breath, nausea, vomiting, intoxication, sedation, and dizziness. Phrenilin reviews are relatively reduced in number, but seem to support the benefits of the drug in reducing headache.

3) Does Phrenilin Work and it is Safe?

Phrenilin contains Butalbital. This ingredient is often combined with other medications, such as paracetamol (acetaminophen) or aspirin and is commonly prescribed for the treatment of pain and headache.

Please note that Butalbital is a physically and psychologically addictive barbiturate. Therefore, it should not be mixed with alcohol due to the high risk of intoxication, respiratory depression and increased liver toxicity.

If not taken correctly, Butalbital may be a very dangerous substance with hard to predict side effects. The most commonly reported side effects include drowsiness, nausea, dizziness, dizzy feeling, sedation, addiction, light-headedness, euphoria, diarrhea, constipation, memory loss or severe impairment of judgment.

Phrenilin side effects may include the less severe drowsiness, light-headedness dizziness, nausea and vomiting, mild stomach pain, etc. to some with more severe impact: allergic reactions, confusion, tingling, tiredness, weakness and others. Anyone with liver or kidney problems, asthma, heart disease or depression should avoid the use of this drug. Phrenilin reviews from consumers usually observe that the product is rather useful for overall pain and especially for moderate to severe migraines with limited side effects.

The daily recommended dose is one tablet every 4 to 6 hours. The treatment will vary based on the need of the individual. A doctor will typically start the treatment with a very low dose and increase it gradually for safety reasons.

Phrenilin tablets are offered in different dosages depending on the needs of the patient. Also, this is an averagely-priced drug. Most health insurance coverage programs and prescription plans will pay for this type of medication. If you cannot afford the treatment, it is advised to consult with your doctor. He may be able to offer you alternative solutions. You can only buy this drug with a prescription. The price is average to high.

The suggested dose is 1-2 tablets every four hours without exceeding a daily dose of 6 tablets.

8) Our Final Take On Phrenilin

Phrenilin delivers 50 mg of Butalbital and 325 mg of Acetaminophen in a serving. The product is classified as an analgesic and is not subject to the Controlled Substances Act. There are many concerns associated with this prescription drug which shouldn’t be taken lightly by the physicians or by their patients.

The formula is also available in the form of Phrenilin Forte that features a double amount of Acetaminophen. It does not contain any caffeine. The medication should be kept out of the reach of children to prevent any accidents. Safety and effectiveness in children under the age of 12 has not been evaluated. There is also a great risk for serious reactions in infants and fetuses, so pregnant and breastfeeding women are highly advised to refrain from using any product based on these substances.
Phrenilin overdose may be potentially lethal. 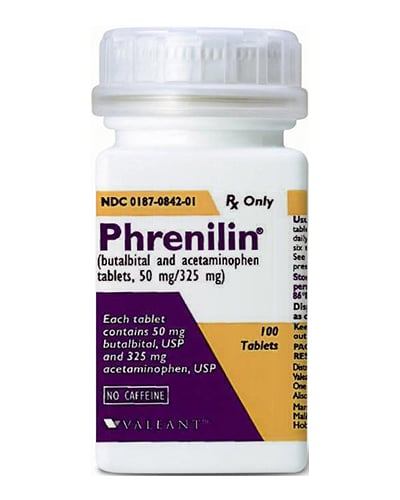 clear
Q:
What are the core ingredients in Phrenilin?
A:

Q:
What is Phrenilin supplement?
A:

Phrenilin Forte is a medication prescribed as an oral administration drug for treating tension headaches, moderate and aggressive migraines and to relieve pain in general. The formula is manufactured by Valeant Pharmaceuticals. One of the ingredients in this drug is Butalbital (5-allyl-5-isobutylbarbituric acid), which has beneficial effects as it reduces stress levels. Phrenilin also contains USP 50 mg and Acetaminophen. It is important that you discuss with your doctor if you have pophyria or if you are taking GHB (sodium oxybate) since the drug is not recommended in these situations. Phrenilin reviews from patients are generally positive, particularly referencing improvements in the case of moderate migraines. Phrenilin side effects may range from mild to serios, therefore it is important to notify your doctor as soon as you start experiencing unwanted effects

Q:
Are Phrenilin benefits actually a reality?
A:

The bottom line is that this drug is a form of prescription medication and the only one entitled to say if this drug can help a patient or not is his doctor. All we can conclude at this point is that the drug contains Butalbital, which can be dangerous if not taken correctly. Phrenilin reviews are nonetheless positive in their majority. It is imperative to follow the treatment as recommended. We also advise our readers to do not purchase this drug from questionable sources.

I always have severe upper back pain and tension headaches as well as migraines. I can’t get a doctor to prescribe anything. “Take a tylenol” is always their response. I’m only 29 and in good shape except for the pain. I’ve had butalbital before (years ago), and it worked great.