Lithium Orotate is a product designed to help manage symptoms associated with bipolar disorder, depression and anxiety, similarly to other lithium compounds. It is considered a less conventional treatment for the conditions we mentioned, as it is still undergoing research to prove its effectiveness.Bipolar disorder is characterized by wild differences in moods, switching from depression to mania, in an unpredictable pattern. It is a very serious condition that can require a lifetime of treatment. This encourages individuals suffering from this disorder to seek alternative forms of medication, as conventional lithium treatment has a wide array of side-effects that might reduce the quality of life for people using it.

Lithium Orotate is also sometimes prescribed as an aid in ADHD, Alzheimer’s disease and alcoholism. Unlike other lithium compounds, this product can also be found at some health stores and pharmacies as over-the-counter medication. This stimulated a lot of manufacturers to produce and distribute the substance, leading to a large difference in quality. It is therefore advised that individuals considering purchasing Lithium Orotate research manufacturers first, to avoid undesired side-effects from a low-quality product.

1) What is Lithium Orotate?

Lithium Orotate is a chemical compound of orotic acid and lithium, used to treat mental conditions such as bipolar disorder, Alzheimer’s disease, alcoholism or ADHD. Some consider it an alternative to Lithium Carbonate, but the evidence in this sense is controversial.

There have been numerous studies regarding the actual effects of Lithium Orotate, but the results tend to be inconsistent and contradictory at times. There is some proof that the substance is effective in the treatment of addictions in humans, facilitating recovery and reducing the symptoms of withdrawal. So far, this form of medication seems to be preferred by alternative medicine practitioners and naturopaths, while psychiatrists choose to stand by the classical treatment of this class of mental conditions.

Some people also believe that Lithium Orotate has fewer side effects than other forms of treatment for bipolar disorder and depression. The evidence is contradictory in this sense as well, with some researchers strongly advising against the use of the compound due to risk of renal failure, while others claim that it is actually preferred, due to the lower amounts required in order to be effective for treatment.

Lithium Orotate is stated to be an effective form of treatment for those that have bipolar disorder. It is a type of Lithium salt that is believed to help with stabilizing mood. When someone has bipolar disorder, they can have a mood that moves from one end of the spectrum to the next. This product is believed to stabilize than regulate this personality and mental disorder by keeping a balanced mood. There have been several studies made in the past, but most were conducted on lab mice, so no concrete results were noted.

This means the positive and adverse effects of Lithium Orotate are still about each. There have been cases of side-effects associated with the product, ranging from nausea, increased the need to urinate, excessive thirst, hand tremors, muscle weakness, loss of appetite, and fatigue. These side-effects are said to subside after a few days of use.

The dosage of Lithium Orotate may differ depending on what each consumer uses. For the safer administration and general use of the product, it is advised to read all of the information on the package carefully. Also, you should note that an eventual overdose leads to serious health problems. You should read the whole list of warnings presented on the packaging as well. As effects may differ from person to person, it is still an unpredictable type of medication.

Lithium Orotate price is one that varies greatly, from one manufacturer to the other. When comparing prices, you may also want to double check the ingredients and overall quality of the product. You may be able to get this type of supplement locally.

The cost of prescription Lithium Orotate is going to be more than over the counter products. However, if you have any coverage for prescriptions, then you may only have to pay a co-pay or a deductible. A generic version of this product will save you up some cash.

7) How to Take Lithium Orotate

One thing that studies have successfully concluded is that the optimal dosage for Lithium Orotate to have the desired effects is dangerously close to dosages considered toxic for the human body. It is therefore discouraged for patients to attempt self-medicating with lithium salts, as the results might prove deadly.

Lithium Orotate might seem as an appealing option for people suffering from depression, stress and anxiety, as it is sometimes available over the counter. Over-the-counter medication is not necessarily meant for self-medication, and individuals tempted to turn to this method should read the labels of the products they’re considering buying, and consult a doctor before making a decision.

Due to the confusing results of studies, consumers might have a difficult time deciding if they want to attempt Lithium Orotate as a form of treatment. There have been people that reported that the effects were quite satisfactory, with the medication performing as expected while causing fewer side effects. Ultimately, it is recommended that you consult your doctor regarding this product, as with any medication meant for psychiatric use. 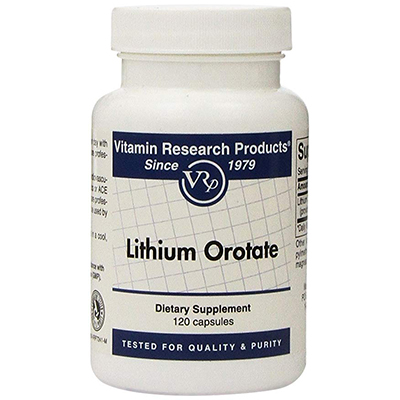 clear
Q:
What are the active ingrediens in Lithium Orotate?
A:

Q:
Lithium Orotate is all about what?
A:

This supplement has the same effects as Lithium Carbonate and Lithium Citrate, but without the harmful and dangerous side effects that come with them. Generally, Lithium Orotate is used to cure symptoms associated with bipolar disorder. The supplements works by first stabilizing the mood swings of the person in cause and then, by keeping a balanced mood, regulates this mental disorder. Lithium Orotate is made of Lithium, Cellulose, Magnesium Stearate obtained from vegetable sources, silicon dioxide and croscarmellose sodium.

Lithium Orotate increased in popularity due to its high bioavailability. What this means is that the body accepts it faster and the drug is absorbed into the blood stream, resulting in more immediate effects. Some supporters of Lithium Orotate argue that it may have a calming, therapeutic effect if taken in small doses. They also state that symptoms of mania, depression, and anxiety are greatly diminished after taking the right amount of this substance. However, if you are a supporter, an expert, or just the average consumer, you should always try to find and use an FDA-approved product. Anything else might end up costing you more than just your money.

This supplement should be in the top 5 IMO as far as just feeling better and that’s all that matters, isn’t it?

it has been 15 days now it had been a bumpy ride so far but i think i will do well in the longrun. the first time i took it was the first time i was clear headed comming out of fog of lithium carbonate. the hardest part is getting the right dosage, doctors wont tell you same as pharmists wont ,t tellyou. right now i a thakin 10 pills 5 in the morning and 5 at night.,nothing vered nothing gained,in for a penny in a pound. hope this has been useful for someone

Please don’t take this if you have Hashimotos Disease. I was taking lithium oratate 2.5mg per day to help with methylfolate and methylcobalamin absorbtion. After 3 months I took 2.5 mg twice daily. I noticed that I was urinating in excess and very thirsty, also becoming very anxious. Within 4 days of upping my dosage I was rushed to hospital with a pounding racing heart massively increased blood pressure and tachycardia, and a panic attack from hell! It has been three weeks now since I ceased taking lithium oratate, the effects are dwindling slowly. Still get pathes of elevated BP and anxiety. I had my thyroid function tested regularly as per advise. The effects I suffered through taking lithium oratate were very frightening. . Please take with caution.