Axona Review – 8 Things You Should Know

Axona is advertised as being a prescription medical food meant to help individuals who suffer from Alzheimer’s disease either in its mild or moderate form. The supplement offered by Accera is meant as either an addition to an existing treatment or as a safer replacement of it, depending on the case. Since its release in 2009, it has been used by a large number of people and because of its success, a personalized dedicated product webpage was created.

Accera is headquartered in Broomfield, Colorado. The business focuses on providing products that target memory disorders such as Alzheimer’s or Parkinson’s diseases as well as other age-related memory loss and cognitive impairing conditions. By following FDA regulations and GMP standards, the company hired people capable of offering innovation and efficacy through easy-to-use and safe medical foods. Considering the fact that Axona was released on 1st of January 2009, this date can be viewed as the launch point of the business.

The formula behind it features a mixture of fatty acids, minerals and vitamins. Axona is the result of intense research and provides a rather unique approach to the problem. It is based on improving the levels of ketones which are naturally produced by the liver to compensate the lack of glucose, commonly found in patients with Alzheimer’s disease.

Axona can only be bought based on prescription, due to the severity of the condition it claims to cure and to the ingredients included. The supplement is basically a medical food that features a combination of minerals, vitamins and fatty acids that were carefully chosen to establish a balance in individuals who suffer from Alzheimer’s disease. This condition is a form of dementia that manifests through impairment of memory as well as poor thinking and learning abilities.

While the main ingredient of Axona is caprylic triglyceride, the addition of vitamins and minerals is meant to enhance the time of absorption and improve efficacy of the formula on the longer term. For example, studies showed that Vitamin C helps the memory by providing antioxidants that possess protective properties against loss of mental alertness and memory issues.

At the same time, Vitamin E has a positive effect when it comes to protecting nerve cells form the damage of free radicals. Furthermore, research studies indicate that the nutrient can maintain brain cells alive in those who suffered from strokes.

2) What Are Axona Ingredients?

The brain is just like a hungry machine that requires fuel to properly function. This fuel is called glucose, and it is transported through the blood. Normally, the levels of glucose obtained from carbohydrates are sufficient to keep the brain working effectively. However, in people who have Alzheimer’s diseases, these levels sometimes drop too low, and as a consequence, the way in which one thinks, solves problems, makes a memory, and reasons are affected. With this in mind, Axona was released to compensate for these losses and enhance symptoms in individuals with this condition.

The formula is a combination of minerals and vitamins, while the main ingredient is caprylic triglyceride. These are a particular fraction of palm or coconut fatty acids. They are produced by glycerol esterification with a caprylic addition and were first developed fifty years ago as a source of energy for people that had fat malabsorption syndrome. Because they’re efficient solvents, they act as carriers for vitamins and actives that are soluble in fat. The downside of this ingredient is that its rapid digestion that sometimes leads to unwanted side-effects such as upset stomach, bloating, and diarrhea. Therefore, it is suggested to combine the treatment with some over-the-counter medication like antacids, simethicone, and antidiarrheals, depending on the situation.

The supplement is well-tolerated, as clinical trials point out. Common side effects include diarrhea, stomach discomfort, nausea, and flatulence (gas), which may be minimized if the supplement is taken shortly after a meal.

There are online customer testimonials about Axona. What is being reported includes:

Axona is offered in the form of powder that can be mixed either with water or other liquids or foods like pudding, oatmeal, fruit juice, chocolate syrup, or ice cream. Each pack features 40 grams; a daily dose recommended being taken after a meal. This is a product that can only be bought with a prescription. This means that the doctor may decide other frequency and quantity for the treatment depending on the gravity of the condition. The price is affordable, particularly when it’s disclosed side effects are taken into account. People can order it either from the website dedicated to it or from other online providers.

People that are sensitive to milk or components of milk should avoid this formula because it also features caseinate and whey. Although they are found in quite small quantities, an allergic reaction may be triggered.

Launched on the market in 2009, Axona is a prescription based medical food meant to positively influence the lives of people who have Alzheimer’s disease. Understanding the implications as well as complications of this condition, the manufacturer sought to lessen its symptoms through a product delivered in an easy-to-use powder form. The treatment can only be prescribed by a medical doctor who is generally the one that decides the daily dosage. From mild to moderate Alzheimer’s disease, consumers stated that this product has helped with their memory problems and sometimes even improved stages of the condition in which other drugs failed. 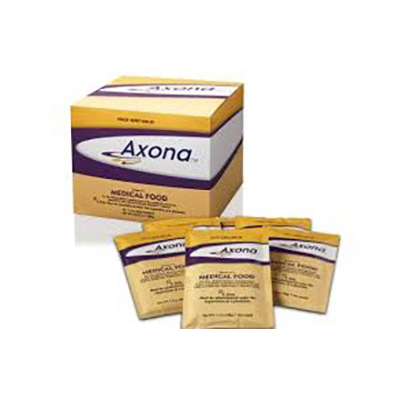 Customers Questions and Answers with Axona

clear
Q:
What does Axona contain?
A:

Q:
What is Axona supplement?
A:

Axona represents a prescription based medical food meant for those who suffer from mild to moderate Alzheimer's disease. It was designed by a company headquartered in Colorado that goes by the name of Accera. Since its release in 2009, the product had enjoyed huge success therefore a dedicated webpage was created, which offers advice to caretakers as well as detailed information on the formula. The approach behind this formula is to enhance the ketones levels, hence stimulating glucose production (patients with Alzheimer's have low glucose levels). People who are allergic to milk should keep away from it.

Q:
Are Axona benefits actually a reality?
A:

Axona represents a prescribed medical food that should provide support for individuals that have Alzheimer's diseases. It is composed of a mixture of minerals, vitamins, and fatty acids. The product was initially released in 2009 and has constantly been enhanced ingredient-wise ever since. However, people who are allergic either to milk or some of the milk's components should avoid this treatment because it includes caseinate and whey. Additionally, some side-effects may appear throughout its utilization because some ingredients are absorbed too fast in the body. In those cases, people should immediately stop the treatment and consult their personal healthcare provider.

This product seems expensive but it absolutely works for my mother-in-law. Her memory, functionality, energy and attitude have improved dramatically in only 3 months. Her life and ours have be changed for the better with Axona and I highly recommend it.

My grandmother began to take Axona right after she was diagnosed with Alzheimer’s Disease as an addition to Aricept. After two weeks of treatment, she paid for lunch the other day, signed her name and calculated the tip. It’s fair to say that this product has done a lot for her and I hope the improvements will keep on going.

I am my wife’s caretaker. She was diagnosed with Alzheimer’s 5 1/2 years ago. I am truly amazed at what Axona has done for her in the past ten weeks. I first noticed changes in her behavior after she was taking Axona for about three weeks. She stopped regressing into her native language (which no one in the house speaks) and reverted to English. She also became more aggressive about following instructions, asserting her own opinions for the first time in about a year. She has since started spending less of the day sleeping. She has returned to working on the Jumble in our daily paper and filling in a few words in the crossword. She has returned to taking her own portion of breakfast cereal instead of letting me bring her plate to the table. Last night she astounded me by taking part in the preparation of dinner, peeling a cucumber, washing the rest of the salad greens and hard boiling two eggs (while stood nervously by).
I realize that these are small victories but I’m certain that those of you who are caretakers understand how astounding they feel when you expected nothing but a downhill slide for as long as you both may live.