Standard Process Fen-Gre is promoted as a homeopathic remedy that was introduced on the nutritional market in 1961. The most important feature of this product is supporting the action of the blood lipid profiles, the mammary gland, and blood sugar metabolism.

The company that designed and is currently delivering this product is called Standard Process and was established in 1929. Founded on American land, it is currently among the top businesses found on the nutritional market. Its portfolio contains more than three hundred remedies divided into three categories: MedHerb, Standard Process Veterinary Formulas, and Standard Process whole food supplements. Furthermore, they state that their labeling and manufacturing processes systems are in accordance to top state-of-the-art facilities. Despite their claims of having GMP certified processes, they haven’t been yet approved by the FDA.

Standard Process is also the company behind Okra Pepsin E3.

Standard Process Fen-Gre has an influence on the body by offering support for metabolic pathways that are linked to regulating the hormones which are associated with optimal metabolism of glucose. Its core component has been utilized throughout history in the quality of support for healthy mucus levels, phlegm in the lungs and bronchial tubes and, hence improving areas like respiratory system and cardiovascular system. In addition, it is presented as a carefully chosen support for improvement in breast-milk volume and it is also recommended for women who are lactating.

Promoted as a dietary supplement that contains a mixture between okra, rice and Fenugreek, Standard Process Fen-Gre may be viewed as a good alternative to prescribed medication for both blood sugar metabolism maintenance as well as blood lipid profiles support. A key feature of this formula is the fact that it can also improve the metabolic pathways that are directly linked to proper glucose levels.

By featuring three components among which one is the key to its positive effects, this remedy can also help with cholesterol level regulation. Fenugreek is known for being a plant that has been used in a variety of ethnic groups even since ancient periods. Even Hippocrates, a popular Greek physician viewed Fenugreek as highly valuable for the human’s wellbeing. Furthermore, throughout history other pharmacologists like the one who wrote De Materia Medica point out its effects. The interesting feature of this plant is its composition that contains different flavonoids, alkaloids, saponins, mucilage proteins, vitamins like B1, A, and C, as well as a wide spread of minerals.

Differently, from most of Standard Process products, Fen-Gre is sold in the form of bottles that contain one hundred and fifty capsules. Considering the fact that the suggested daily intake is three capsules per meal followed by a glass full of water, a bottle is sufficient for fifty days of treatment.

The product is viewed by the majority of the consumers as being moderate-priced and may even turn out to be cheaper if promotions and discounts are involved. However, on the manufacturer website, there is no money-back guarantee or international shipment policy which may seem like a negative feature to some potentially new clients.

6) How to Use Standard Process Fen-Gre

Basically, the compounds in this plant work by creating mucus “solvent,” thus having the ability to dissolve before softening the hardened masses of mucus. This consistency change determines the body to expel mucus and phlegm from the bronchial tubes way more easily. Despite the fact that there are no serious reported side-effects from those who have already tried this treatment, people properly follow the label indications. The proper intake is suggested at three capsules per day on three different times, but always followed by a glass of water.

By being advertised as a provider when it comes to maintaining healthy mucus levels, blood lipid profiles as well as proper blood sugar metabolism, Standard Process Fen-Gre was created by one of the most experienced nutritional businesses who have been evolving year after year. The supplement works by helping regulate the metabolic pathways so that it can determine a level up in the amount of hormones associated with glucose metabolism. Because of it positive feedback and the background of its manufacturers, it is safe to say that Standard Process Fen-Gre is a proper alternative to medication.

Even though there are no reported harmful Standard Process Fen-Gre side effects, should pay attention at their dosages when following this treatment. 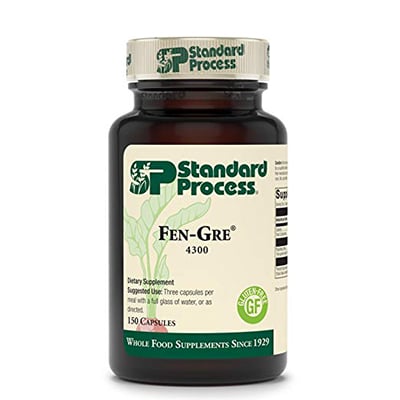 clear
Q:
What are the active ingredients in Standard Process Fen-Gre?
A:

Q:
What is Standard Process Fen-Gre?
A:

Standard Process Fen-Gre represents a product that was designed to optimize glucose metabolism levels while supporting the mammary glands and the blood liquid profiles. The company behind it is Standard Process and has been on the nutritional field for more than eighty years. By focusing on its core ingredient, the remedy works by creating mucus “solvent," thus first softening and then dissolving the masses of mucus. Even pregnant or lactating women may use this product, but only after consulting their personal physician.

By focusing on providing support in the maintenance of healthy mucus levels, proper blood sugar metabolism as well as blood lipid profiles, Standard Process Fen-Gre was designed by one of the oldest nutritional companies who has implemented new technologies. The remedy works by regulating metabolic pathways to level up the proper amount of hormones directly associated with glucose metabolism. Due to the positive online consumer reviews and the experience of its makers, it is safe to say that Standard Process Fen-Gre may represent a proper alternative to prescribed medication.

Despite the fact that there are no reported side-effects, people should be careful while treating themselves with this remedy.

Have been using this product for 9 years. Used to cost a lot less. Works great for us for congestion.

I was taking generic allergy pills and was becoming immune. When I started taking the FenGre it worked just as well as the other allergy pills I had been taking. The Fen Gre does not last all day. You do need to take it as the bottle states, which is three times a day. If you have bad allergies like I have, you will know when your next pill is due.

I’m experiencing pain and extreme cramping in the right side of my right breast i took 3 capsules of Fen-Gre and 2 capsules of Congaplex (as directed) at 10 am this morning…it is now 1:30 pm. I do not wish continue with these supplements!

I don’t take Fen-Gre all the time, but perhaps I should, especially if it would help lower cholesterol. I take it when my nasal passages and lungs are stopped up. It does a wonderful job of loosening everything up so that you can get rid of the stuff. It really works for me.

I’ve taken Fen-Gre to clear my lungs after a severe bronchitis, because I’m allergic to many of the prescription drugs against congestion and mucus. I can honestly say it worked even better than I had expected and I haven’t felt my lungs clogged since.

I have been taking fen gre for a little over a year now, along with a few other supplements. My whole life I have had horrible allergies, continuous sinus infections, pneumonia, etc. For the first time in my life I can smell things!! I have not had one sinus infection, no upper or lower respiratory problems at all. Since my early 20’s I have been on antibiotics at least 6 times a year ( I am 46 ) in the last 14 months I have had no antibiotics. I feel better than I ever have in my life. I would recommend this to anyone.

Can you tell me the dosage you were taking daily please

Which other supplements and how much?