Rawleigh Medicated Ointment is a cream marketed to help relief discomfort associated with the common cold, such as minor nasal irritations and congestion. The formula, manufactured by Goldshield Elite under the Rawleigh brand, has been available on the market for several decades. The manufacturer claims that customers have also used the formula to treat and manage several other conditions such as general aches and pains, headaches, chicken pox (to relieve itching), sinus problems, sore muscles rheumatism, Neuropathy symptoms, sciatica, insect bites and hives.

Goldshield Elite has built a reputation as a leading manufacturer and distributor of healthcare and home products. The company was founded approximately 30 years ago, and comprises three other companies: W.T. Rawleigh Products, Achievers Unlimited and Changes International. Through a direct selling business model, the company manages to operate a worldwide network of distributors.

Rawleigh Medicated Ointment is recommended to a broad range of patients, due to its numerous therapeutic applications.

1) Rawleigh Medicated Ointment at a Glance

Rawleigh Medicated Ointment is a mixture of Camphor, Oil of Eucalyptus and Menthol.

Camphor is extracted from the Camphor Tree and is known to possess anti-septic, decongestant, anesthetic, anti-spasmodic, disinfectant, sedative, anti-neuralgic, anti-inflammatory and insecticide effects. As a decongestant, Camphor works to open up congestions of nasal tracts, lungs, and bronchi. Its strong penetrating aroma is very efficient, especially in combination with Menthol and Eucalyptus, such as it is found in Rawleigh Medicated Ointment.

Camphor is an effective anesthetic and has been used for local anesthesia in case of numbness of sensory nerves, convulsions, nervousness or epileptic episodes. Camphor works as an anti-spasmodic and almost immediately relieves cramps and spasms. Important other benefits include stimulant properties for the circulatory system, alleviation of rheumatism, gout and arthritis.

Menthol is a common ingredient of cough drops and syrups designed to relieve sore throats and throat irritations. It has powerful decongestant properties, especially if rubbed on the chest area. Eucalyptus is also rich in medicinal effects and is particularly known as having anti-inflammatory, deodorant, antiseptic, antispasmodic, decongestant, antibacterial and stimulating properties.

3) Is Rawleigh Medicated Ointment Right for You?

Rawleigh Medicated Ointment is a blend of herbal extracts in a base of Petrolatum, Mineral Oil, Paraffin, Suppository Base, Ceresin and Cocoa Butter, designed to cure various medical conditions when applied topically.

Considering this formula is still popular today, chances are it is effective. Camphor is a naturally occurring waxy, white or transparent solid. It is found in wood of the Camphor Laurel, a large evergreen tree found in Asia and also other related trees in the laurel family. It is used traditionally as a slight anesthetic and antimicrobial substance. It is readily absorbed through the skin and produces a feeling of cooling similar to that of menthol. It is used today in anti-itch gels and cooling gels. It may also be administrated orally to treat fatigue. Eucalyptus Oil has antibacterial effects on pathogenic bacteria in the respiratory tract. It is used in modern medicine to relieve the symptoms of influenza and colds. When applied topically, it has anti-inflammatory and analgesic qualities.

Testimonials about Rawleigh Medicated Ointment are posted online. What is being stated includes:

4) What Rawleigh Medicated Ointment Does?

This product has excellent value considering one container can last for a very long time. The price of Rawleigh Medicated Ointment varies depending on the size of the container, but even so, it is an inexpensive product.

It can be purchased directly from the manufacturer or other retailers. Partners are offered significant discounts. Money back guarantees may also be offered.

There are several testimonials posted online, on one of the distributor’s websites. The manufacturer recommends using the product whenever needed, by rubbing it on the congested areas.

Rawleigh Medicated Ointment is one of the Rawleigh’s oldest products. Rawleigh was established in 1889 and currently offers a large number of healthcare formulations, including Rawleigh Medicated Ointment. Particularly, this product is designed to help decongestion of nasal and other respiratory ways, as well as to bring relief to minor pains and aches. The formula is based on a mixture of ingredients with potent and proven benefits as decongestants, such as Camphor, Eucalyptus Oil and Menthol. Although no clinical trials or scientific research documents the company’s core benefit claims, the formula is likely to work and accomplish its purpose. 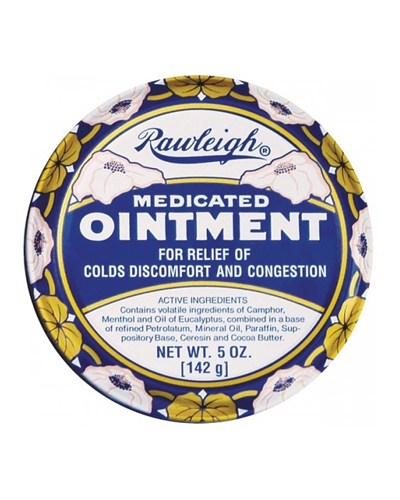 clear
Q:
What are the core ingredients in Rawleigh Medicated Ointment?
A:

Q:
What is Rawleigh Medicated Ointment?
A:

Advertised as one of the company's oldest products, Rawleigh Medicated Ointment features a combination of Camphor, Eucalyptus oil and Menthol and claims to treat discomfort caused by colds (congestion in particular) and nasal irritation. The formula is manufactured by the experienced Goldshield Elite which also claims the product might be helpful against general pains and aches (headaches, muscular aches, etc), minor skin abrasions, and hemorrhoids. Rawleigh Medicated Ointment should be inhaled or rubbed on the chest, back, and throat for best results.

This formula has passed a difficult test, the test of time. This old fashioned formula contains ingredients traditionally used to cure various medical conditions. What makes Rawleigh Medicated Ointment different from similar products is the fact that it is supported by a large number of positive testimonials. Customers seem to be very pleased with the results, some claiming to have used it all their life.

The aroma and penetrating ingredients may bring old-fashioned results when our immune systems let us down.

I use this on my kids and it is incredible, every time. My grandmother used to do it to us, and I must say this is just as effective as the product used by her back in my childhood.

I will be 70 this year and I grew up with Rawleighs products. My Dad sold it door to door. It was difficult to find and Watkins just is not exactly the same. I found a distributor at the Harrow Fair and was able to get the real thing.
My daughter and many of my friends love it too.

I was introduced to Rawleigh Medicated Ointment and Salve by my husband’s family way back in 1971. My late father-in-law considered it the only thing necessary in a first aid kit. He spent a lot of time out prospecting and on one occasion one of the indigenous men in his prospecting party accidentally put his foot in the fire and was severely burned. Hundreds of miles from any help, my father-in-law cut off the man’s boot, and then completely encased his foot in Rawleigh Medicated Ointment – he used the entire tin! He then bandaged the foot. They headed for home, and had to travel for five days to get there. When they arrived and unwrapped the poor man’s foot, they found it well on the way to being healed. Also, he had suffered very little pain.
More than half a century later, our own son was badly burned in a dairy accident, with boiling water pouring into his rubber boot. Once again the Rawleigh Ointment was applied and again, it healed really well (despite being told that he may need a skin graft).
I use it myself to help control the pain of neuropathy in my feet.
Rawleigh Medicated Ointment is the one thing we always have on hand.
Thank you for a great product!
Hanna

We grew up with Rawleigh Ointment and I still use it today. I can’t imagine ever getti g through life without it….