Advertised as a dietary supplement that contributes to the health of the skeletal system by enhancing formation of connective tissues while also helping support chloride ions on a cell level, Ostarplex was released on the nutritional market in 1958. Moreover, this product may relief joint discomfort by normalizing serotonin levels due to its composed Vitamin B6.

The company that designed and is currently distributing this product is named Standard Process and possesses a background of nutritional marketing with more than eighty years of experience. Established by Dr. Royal Lee, the principle of the company relies on the fact that the source of a compound is more reliable than the quantity utilized in a supplement. Furthermore, a specific characteristic is the fact that they separated their products into three categories that are: MediHerb, Standard Process whole food supplements, and Standard Process Veterinary Formulas.

By claiming that the ecosystem in which the remedy is manufactured was characterized by the utilization of farming techniques like feritilizing the soil with byproducts from the processing as well as nutrient-rich cover crops, rotating crops and monitoring the health of the plants and practicing strict weed-control standards, the business claims that the soil has minerals and nutrients, thus plants are free from synthetic pesticides.

Around one hundred years ago, the physiologist Claude Bernard called the fluid where the cell grows, lives and performs its functions the “internal environment” or “milieu interieur.” This fluid contains a series of substantial compounds which work to offer the proper electrolytes and nutrients for the living cells. In order to obtain a normal functioning, it uses compounds such as those found in the ammonium chloride and betain hydrochloride, more particularly chloride ions. These are essential for water sustenance in the cells. Combined with veal bone PMG extract which serves a myriad function in shape and support of the body, it has a contribution to the overall function and well-being of skeletal system as well as other physiological processes.

Ostarplex is a product which comes in the form of capsules, with 40 capsules making a bottle. Because the normal daily dosage is of one capsule per day, a bottle can last for up to 40 days if the personal healthcare doesn’t recommend another daily dosage. People may find this product either on manufacturer website or other online or local retailers. It is overall regarded as an affordable product, but its price can vary depending on the retailer. Unfortunately, Standard Process doesn’t have an international shipment policy. Thus people from outside America should seek for their local suppliers if they desire to buy this product.

Due to these compounds, as well as others like alfalfa, niacin, riboflavin, and Vitamin B6, Ostarplex is a remedy that aims to maintain healthy cells while also maintaining healthy joints. The Arabs were the first ones to discovered alfalfa that was later called the “father of all foods,” because it contains many nutritional benefits. Studies later showed that it features vitamin complexes A, B2, B1, B3, B6, C, and K, as well as minerals such as calcium, copper, magnesium, iron, manganese, phosphorus, zinc, potassium, sulfur, chlorine, sodium, and silicon, thus offering vital nutrients for keeping a strong skeletal tissue.

Advertised as an encourager of liver function connective tissues as well as a healthy skeletal system, Ostarplex possesses more than fifty years of experience on the nutritional field due to its release in 1958. It contains a blend of vitamins mixed with some herbal extracts as well as animal traces that are meant to offer needed nutrients in order to support the above mentioned bodily organs, functions and systems. Until now, there were no reported side-effects and additionally customers who have tried this supplement were contented with its effects, but more research is needed in order to generally state its effectiveness. 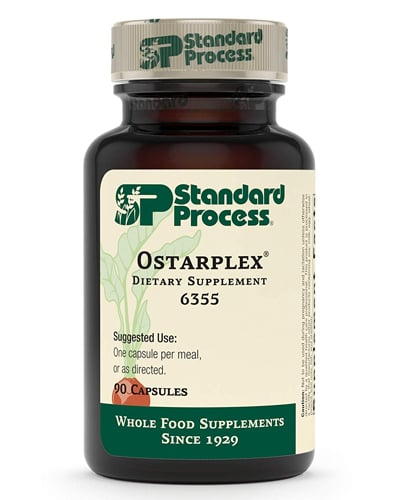 Q:
What is Ostarplex?
A:

Ostarplex represents a supplement which was introduced on the nutritional market in 1958 and focuses on delivering required nutrients for a healthy skeletal and joint system. It features a blend of vitamins combined with herbal extracts and some animal extracts which were chosen to provide nutrients to those two systems at a cellular level. The product is offered by Standard Process and can't be taken by vegetarians and vegans.

Q:
Does Ostarplex work?
A:

Presented as an encourager of connective tissues, liver function, and a healthy skeletal system, Ostarplex has more than fifty years of experience on the nutritional market because it was introduced in 1958. It features a blend of vitamins in combination with some herbal extracts and animal traces which are meant to deliver required nutrients to maintain the above mentioned bodily functions, organs, and systems. So far, there were no reported side effects, and people who have used this supplement were pleased with its effects, but further research is required to generally state its efficacy. Vegetarians and vegans can't follow this treatment.

So I’ve never had any problems swallowing pills, can swallow handfuls of large pills at a time. But these are hard to get down. I manage but will probably try something different next time. I started taking these because I bruise really easily and thought the Vitamin K supplements might help. I have noticed less bruising.

i was told to stay away from phosphoric acid because it is the worst thing for bones and ligaments and tendons.I see that it is an ingredient in ostarplex.Im puzzled

Because the phosphoric acid in Ostarplex is listed under a “Proprietary Blend,” we can’t tell how much phosphoric acid is in this formulation. However, it’s far more common to have too much phosphorus than not enough. Phosphorus is found naturally in many foods, and phosphoric acid is used as an additive, so most people get enough in their diet. Your body needs phosphorus, but too much of it can cause problems. Studies suggest that excessive phosphorus intake can put you at risk for heart disease and osteoporosis. The recommended daily amount (RDA) of phosphorus needed for a normal bodily function is 700 mg. You can get this easily from natural food sources. Foods that are high in protein (e.g., eggs, chicken, meat, beans, and fish) are usually high in phosphorus as well.