Promoted as a supplement that helps maintain normal blood production, Ferrofood was introduced on the nutritional market in 1944. Its main benefit is based on a high iron quantity which is specifically reliable for women during pregnancy and lactation periods.

The business that provides this remedy to individuals is named Standard Process and was founded in 1929 by Dr. Royal Lee. Often considered to be the “Einstein as nutrition,” this world-wide appreciated CEO stated that the biggest difference between its business and similar others is their focus on the source from which they obtain the component rather than the quantity used. He also said that a small amount of a whole food is able of offer the nutrients needed by the body in order to function properly.

Ferrofood contains multiple nutrients obtained from animal or plant sources. Furthermore, a unique manufacturing process of deriving tissues from animal glands or organs was used during the fabrication processes. Its manufacturer claims that this formulation exhibits a low risk of side-effects such as constipation due to its organic compounds used in low dosages. It is mostly suggested for people with iron deficiencies because of factors like weight loss, menstruation, growth periods, aging, or pregnancy.

In comparison to early Egyptians who used minerals to support the health of their hair, current knowledge related to the iron requirements by the body is more sophisticated. In Ancient Greece, iron was combined with wine and utilized to restore decrease of sexual function that was most of the times age-related. On the other hand, over the centuries, the iron requirements in metabolic activity and human nutrition have been researched and studies revealed that without it, the body is unable to synthesize hemoglobin because blood features a protein-iron compound that carries the oxygen from lungs to tissues.

Due to the fact that iron needs in normal body functioning, manufacturers have developed a set of supplements that aim to fulfill the gap by providing daily amounts of this mineral. One of these remedies is Ferrofood. By having a quantity of 10 mg iron per serving, this product intends to avoid problems like anemia, while also enhancing healthy red-blood-cell formations. In addition, this component has a positive effect on treating attention deficit hyperactivity disorder (ADHD), canker sores, fatigue, inability to get pregnant, depression, and Crohn’s diseases. In most of the cases, women take iron based supplements in order to make up for iron loss that occurs during menstrual periods.

3) Does Ferrofood Work and it is Safe?

Compared to early Egyptians who utilized minerals to support their hair, our current knowledge regarding the need for iron is more sophisticated. In ancient Greece, iron was mixed with wine and used to restore reduction of sexual function which was age-related in most of the cases. However, over the centuries, the need for iron in metabolic activity as well as human nutrition has been further researched, and studies showed that without it, the body couldn’t synthesize hemoglobin because blood contains a protein-iron compound which carries the oxygen from the lungs to the cellular tissues.

Because of this iron requirement from the organisms, producers have developed a series of supplements which aim to fulfill the gap by offering daily amounts from this mineral. A product like this is Ferrofood. By containing 10 mg of iron per serving, this remedy focuses on avoiding problems like anemia, while also encouraging healthy red-blood-cell formations. Additionally, this ingredient has a positive impact on treating canker sores, attention deficit hyperactivity disorder (ADHD), depression, fatigue, inability to get pregnant, and Crohn’s diseases. Most of the times, women take iron based supplementation to make up for iron loss which occurs during heavy menstrual periods.

Although viewed as likely safe when the usage is done in appropriate manners, iron can cause side-effects like pain, diarrhea, vomiting, constipation and nausea. While taking antibiotics, people should avoid taking this treatment due to possible interactions which may cause problems or just slow down the antibiotic intake, thus consumption being in vain.

There are online customer testimonials about Ferrofood. What is being reported includes:

6) How Much Does Ferrofood Cost?

Found for purchase by bottles that contain either 40 or 150 capsules, depending on the period of the treatment desired by the consumer, Ferrofood is often viewed as a moderate priced supplement. Considering the recommended daily intake of one capsule per day, a bottle is usually sufficient for either forty or one hundred and fifty day of treatment, meaning either one month or five. People may buy this product either from official manufacturer page if they live in America or from other online retailers. When ordering larger quantities, discounts and promotions are offered. Regular customers are offered privileges.

The recommended daily intake of Ferrofood is one capsule per day, after a meal and with water. It is important to follow the label dosage in order to avoid potential unwanted side-effects.

8) Our Final Take On Ferrofood

Advertised as a supplement that should be an alternative to regular iron drugs, Ferrofood should used by people during growth or when iron deficiency problems like anemia, depression, fatigue, or Crohn’s disease are present. Specifically, women during menstrual times may take this remedy to balance their iron levels. Except for the remedy’s main ingredient there are also two vitamins that facilitate the bodily absorption. These are Vitamin B12 and Vitamin C. However, people using antibiotics are advised not to take this treatment while following the antibiotic treatment because the iron can interact and lead to side-effects such as diarrhea, nausea, and pains. 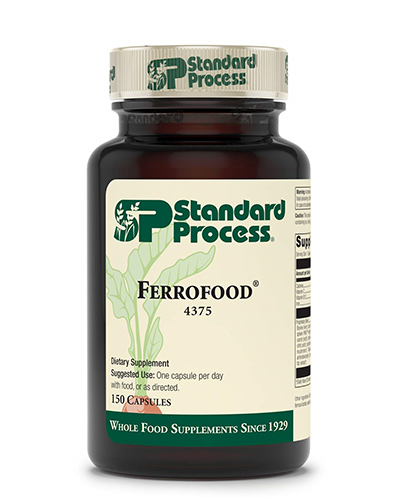 Q:
What is Ferrofood?
A:

Ferrofood is advertised as a dietary supplement that aims to regulate iron levels and be a natural approach compared to regular iron drugs. It should help treat health conditions such as fatigue, depression, anemia, or Crohn's disease. It is offered by Standard Process and has been manufactured from 1944. Particularly, women may take advantage of this treatment during menstrual periods because at those times they lose high amounts of iron.

Q:
Are Ferrofood benefits actually a reality?
A:

Presented as a dietary supplement which should prove an alternative to regular iron medication, Ferrofood can be used by people during growth, iron deficiency problems like anemia, fatigue, depression or Crohn's disease. Particularly, women during menstrual periods may take this homeopathic remedy to level their iron levels. In addition to the remedy's main component, there are two vitamins that help with the body's absorption. These are Vitamin C and Vitamin B12. However, people taking antibiotics are advised not to follow this treatment in parallel with them because contained iron may interact and cause side effects like diarrhea, pains, or nausea.

I have a rare bleeding disorder called HHT. After trying many types of iron and suffering severe digestive problems, I found ferrofood. It is a heme iron made from animal, not plant-based products. It is also a capsule that is powdered for easier absorption. Since being on ferrofood, I have cut the necessity to have iron infusions by 75%. I literally can’t live without this product.

Title for your comment
Best Iron Supplement After years of Searching
Have you tried this product?
Yes
Reply
Jessica R. Adams

Highest quality organic USA products. Top shelf! I use the entire line and so does my whole family. I highly recommend it.

After taking this for a few months, I had a blood test done checking for anemia among other things.. And my iron levels were up to normal. I will never be without !