Manufactured by Eisai, Zonegran is indicated for the adjunctive treatment of partial seizures in adults with epilepsy. The manufacturer claims the drug is efficient in both the prevention and the treatment of this medical condition and should be used in combination with other anti-convulsing medication.

Eisai was founded in Japan in 1941 and is now a reputable multinational pharmaceutical company.

The drug is an FDA-approved prescription medicine. The manufacturer mentions excellent clinical trial results, which have shown great efficiency in using the medication as an adjunctive therapy.

The trials conducted in three multicenter, placebo-controlled, double-blind, 3-month clinical trials in 499 patients with refractory partial-onset seizures revealed a 27% – 40% median reduction in all partial seizures a -1% – 9 % median reduction with placebo.

Remember that Zonegran’s safety and effectiveness in children under 16 years of age have not been proven.

The drug works through its active substance – Zonisamide, a sulfonamide anticonvulsant used in therapy for adults with partial-onset seizures. Although Zonisamide’s exact mechanism of action is unknown, multiple potential mechanisms of action may impact seizure reduction.

One theory claims the substance stabilizes the brain’s electrical activity and thus prevents the excessive seizure-causing signals from spreading through the brain.

Another one claims it works to balance GABA levels, a neurotransmitter responsible for calming the nerve activity in the brain.

2) What Are Zonegran Ingredients?

3) Does Zonegran Work and it is Safe?

It is essential to understand that Zonegran isn’t useful for the treatment of seizures on its own. Instead, it is a type of medication that is given in conjunction with others.

This is referred to as adjunct therapy. It has been offered various anti-seizure and anti-epilepsy medications.

The main ingredient in this formulation is Zonisamide (Zonegran). The product is sold in capsule forms at different strengths. The amount of it will depend on the needs of the patient.

Many side effects have been reported with the use of Zonegran. This includes drowsiness, dizziness, nausea or vomiting, headaches, irritability, rash, fever, sore throat, dark colored urine, areas of the body that bruise very quickly, and insomnia. Anyone who is allergic to sulfa drugs shouldn’t use this medication.

It is crucial only to take the recommended dose of it. Otherwise, the risk of kidney stones developing can occur. Women who are pregnant shouldn’t use Zonegran because it can cause congenital disabilities.

5) What You Need to Know Before Taking Zonegran

6) How Much Does Zonegran Cost?

Zonegran is a relatively cheap form of anticonvulsant medication. Most insurance programs and prescription plans will cover the cost of it. It is advised to contact the provider of that coverage directly to see what they will cover.

There could be a co-pay or a deductible that applies depending on the types of coverage that a person has.

Zonegran may cause serious side effects, such as severe skin rashes (that could lead to death), fever, suicidal thoughts or actions, metabolic acidosis (increased level of acid in the blood), difficulties in attention, memory, thinking, and speech.

Zonegran is a relatively recently developed anti-epileptic drug that has proven highly efficient in treating partial seizures in adults with epilepsy. The manufacturing company mentions large-scale clinical tests that prove its efficiency.

However, the drug is associated with a list of severe reactions such as skin rash, suicidal thoughts, drowsiness, dizziness, and cognitive impairment (speech, memory, and concentration may be affected).

According to the manufacturer, the elimination half-life of Zonisamide in plasma is approximately 63 hours. Thus consistent therapeutic levels in the blood are ensured.

A doctor’s consultation is required before starting taking the drug and before deciding to interrupt treatment.

A doctor’s recommendation is required both before starting treatment and in case of intent to interrupt treatment. The drug is available in 25-mg, 50-mg, and 100-mg capsules, and a month’s supply greatly varies on other medications included in the treatment. 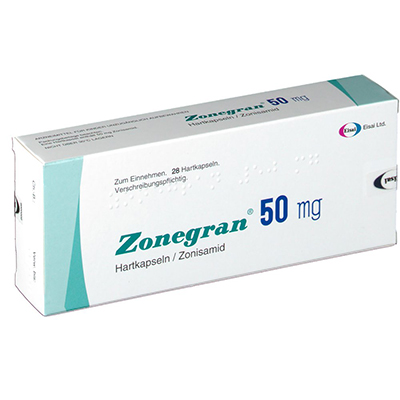 clear
Q:
What are the active ingrediens in Zonegran?
A:

Q:
What is Zonegran supplement?
A:

Zonegran, also known as Zonisamide, is an FDA approved medication used in treating seizures caused by epilepsy or other disorders.

Zonegran was also shown to be effective in treating pain caused by migraines.

The company claims that this product may be taken to treat seizures, mostly with those associated with epilepsy. Many users state that the product works well and is easy to take. Still, a commonly reported side effect is dizziness.

People looking for an all-natural solution or one deviating from prescription medications may find that this isn't the product they're looking for.

As there are no known medicinal cures for epilepsy, it might be beneficial to use some natural alternatives to reduce the unwanted side effects.

People stating that this medication is not a stand alone medication for seizures is something with which I disagree. I started on this medication in 2013 as my main seizure medication, & it has worked better than any other medication I’ve been on. I’m still on my original dosage 8+ years later with 1 seizure in the first year of starting this medication. Nothing since. Only negative, I now deal with occasional kidney stones.

Title for your comment
I love Zonagran
Have you tried this product?
Yes
Reply