Lexapro is the brand name for a drug called Escitalopram. Medical doctors prescribe this drug to treat depression and generalized anxiety disorder.

During our Lexapro review, we will answer some commonly asked questions about this prescription medication, including questions regarding potential side effects, claimed benefits, testimonials, effectiveness, and potential alternatives.

Lexapro (Escitalopram) is a type of prescription medication called a selective serotonin reuptake inhibitor (SSRI). It works by increasing levels of serotonin, a neurotransmitter in the brain that helps maintain mental balance.[1][2]

Lexapro can help relieve symptoms of depression, such as tiredness, loss of interest in activities, lack of attention, and feelings of worthlessness and guilt. It can also ease such symptoms of generalized anxiety disorder as restlessness, difficulty concentrating, and irritability.[3]

2) How Did Lexapro Start?

On March 14, 2012, the FDA approved the first generic version of the popular antidepressant Lexapro (Escitalopram).[4] Like the brand-name drug, the generic is recommended for the treatment of both generalized anxiety disorder and adult depression.

3) Details on Lexapro Ingredients and Uses

Escitalopram is a chemical substance approved by the FDA to treat generalized anxiety disorder in adults and major depressive disorder in adolescents and adults.

Lexapro’s mechanisms of action to reduce symptoms of anxiety and depression are not fully understood. However, based on the many clinical trials conducted over the past decade, scientists have concluded that Escitalopram affects serotonin.

Serotonin is a brain neurotransmitter involved in sleep, mood, and other bodily functions. It is thought that by taking Lexapro, serotonin levels in your brain become more balanced, helping to enhance your mood and reduce anxiety.

There is some indication that Lexapro is more potent than a range of other antidepressants, and it is often the first option because of its effectiveness and tolerability.

As with most prescription medication, numerous safety and efficacy studies have been conducted on this product. Some of the most relevant clinical studies include:

Some Lexapro (Escitalopram) claimed benefits include:

6) Is Lexapro Safe for Everyone?

Common side effects associated with Lexapro (Escitalopram)[10] include:

Patients who are started on treatment with antidepressants should be carefully observed for suicidality, clinical worsening, or unexpected changes in behavior.

Possible serious side effects of Lexapro include:

Some patients undergo withdrawal reactions[11] upon discontinuing SSRI therapy. Symptoms may include:

7) Precautions of Lexapro Use

As it’s the case with all prescription medication, there are quite a few warnings and precautions for Lexapro (Escitalopram).

Who should NOT take Lexapro:

Please note that Warfarin, Aspirin, medication for seizures, anxiety, depression, or migraines, and nonsteroidal anti-inflammatory drugs (NSAIDs) such as Aleve (naproxen) or Motrin (ibuprofen) can interact with Lexapro and should be used with wariness.

People taking Tryptophan, other SSRIs, serotonin-norepinephrine reuptake inhibitors (SNRIs), and St. John’s Wort should take Lexapro with significant caution and close monitoring due to the potential for serotonin syndrome.[12]

8) Where to Buy Lexapro in the United States?

Lexapro (Escitalopram) is a prescription medication. That means it can’t, and it shouldn’t be purchased from unauthorized stores. It is available, however, at most pharmacies.

Lexapro is available as a generic drug as well. In general, generic drugs cost less than their brand-name counterparts.

Lexapro is available in 5, 10, or 20 mg tablets (brand or generic) and as a liquid in 5 mg/5 ml oral solution (generic). This prescription medication costs are about $379 for 30 tablets of 10 mg brand name tablets.

Most health insurance companies will cover the expenses of treatment with Lexapro. As brand-name drugs, Lexapro can be quite pricey. However, your out-of-pocket costs will depend on your health coverage plan.

Celexa is another alternative to Lexapro. In general, Celexa and Lexapro work well to treat depression. Both prescription medications have similar interactions and warnings and cause many of the same adverse effects. Still, there are differences between the two, including what drugs they interact with, who can take them, dosage, and if they also treat anxiety.[14]

Zoloft is an SSRI indicated for the treatment of the obsessive-compulsive disorder (OCD), major depressive disorder (MDD), post-traumatic stress disorder (PTSD), panic disorder (PD), premenstrual dysphoric disorder (PMDD), and social anxiety disorder (SAD).[15] It is also important to mention that both Lexapro and Zoloft come with an FDA black box warning for antidepressants and suicidality.

The standard initial dose of Lexapro is usually 10 mg, once daily, with or without food, in the morning or evening. If you experience mild side effects (i.e., drowsiness), it is a safe idea to take it in the evening. Some medical doctors may prescribe gradually higher doses.

Important to know: if you neglect to take Lexapro, take your missed dose as soon as you remember. But if it’s almost time for your next dose, skip the missed dose and get back on schedule.

Lexapro is available in several variations:

13) What Customers Say About Lexapro

"I was on Lexapro for six years before switching to something else as I was feeling mild depression and ongoing lethargy. " [Read full review]

"Currently, on day 2 - First time using antidepressants, it makes me feel so sick, I can't stop vomiting, and the just the smell of food makes me nauseous." [Read full review]

"Lexapro didn't work for me at all, but I was also on Risperdal and Invega sustenna." [Read full review]

14) Our Verdict on Lexapro

Lexapro (Escitalopram) is a potent drug that has been shown to help many people. However, based on your condition, Lexapro may or may not be the right medicine for you. Be straightforward with your doctor when you talk about your current mental and physical health and your health history.

We strongly recommend taking Lexapro precisely as directed by your doctor to treat your mental health problem. Regularly, medications for mental health conditions are part of an overall treatment plan that includes counseling and other therapies.

Talk with your doctor about how long it may take for Lexapro (Escitalopram) to begin making a difference in how you feel. If it seems like the drug isn’t working, tell your physician. There may be other alternatives to treat your condition. 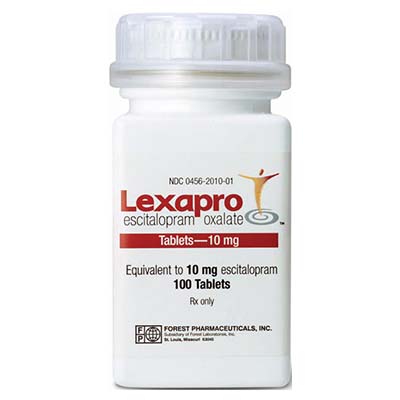 clear
Q:
What are the active ingrediens in Lexapro?
A:

Q:
Lexapro is all about what?
A:

Lexapro is the brand name for a prescription drug called Escitalopram. Physicians prescribe this medication to treat generalized anxiety disorder, as well as different forms of depression.

Q:
What are the Lexapro side effects?
A:

Lexapro is a prescription medication. Therefore it is associated with a large number of mild, moderate, and even severe side effects. If you experience any of the following side effects, report immediately to the prescribing doctor: nervousness, restlessness, feelings of panic, muscle stiffness, fever, hyperactivity, hallucinations, confusion, paranoia, any changes in mood or behavior, nausea, increased heartbeat, diarrhea, changes in blood pressure, vomiting, grouchiness, and loss of physical coordination.

Q:
Where can I buy Lexapro?
A:

As a prescription medication, Lexapro is available for purchase at most pharmacies.

Q:
How much does Lexapro cost?
A:

Q:
What are the advantages of taking Lexapro?
A:

Many clinical studies are supporting the effectiveness and efficiency of Lexapro. However, whether this prescription medicine is right for you or not can only be determined by your medical doctor.

Q:
Can I take Lexapro with a prescription?
A:

Many other prescription medications may affect the way Lexapro works. The drug could also affect other medicines. It's imperative to let your physician know about everything you are taking, including any over-the-counter (OTC) medications, herbs, dietary supplements, or illegal drugs.

Q:
Can I take Lexapro with other supplements?
A:

Lexapro (Escitalopram) may negatively interact with some dietary supplements, including herbal supplements like St. John's Wort and Ginkgo Biloba.

Q:
Does Lexapro have a recommended daily dosage for children?
A:

Q:
Are there any dangerous ingredients in Lexapro?
A:

Lexapro only contains one active ingredient in the form of Escitalopram. This chemical compound was studied across multiple clinical trials, and it was shown to cause mild, moderate, and even severe side effects in some patients.

Q:
How do I know if Lexapro is right for me?
A:

You should not be taking Lexapro unless it was prescribed to you by a medical doctor.

Q:
Is Lexapro recommended for pregnant or nursing women?
A:

Lexapro is not recommended to pregnant women and breastfeeding mothers as the medication can be passed to the child.

Q:
How much Lexapro should I take a day?
A:

The standard initial dose of Lexapro is usually 10 mg, once daily, with or without food, in the morning or evening.

Q:
What is the fastest way of contacting Lexapro customer support?
A:

You can contact the Forest Laboratories customer support department by phone at 1-212-421-7850, by mail at 909 Third Avenue New York, NY 10022, United States, or by using the contact form available on the official website allergan.com.

Q:
Can I return Lexapro?
A:

As Lexapro is a prescription medication, please discuss any possible returns or refunds with the doctor who prescribed it.

Most customer complaints gravitate around the many potential side effects and drug interactions. Some users have complained about the lack of results as well.

Q:
What do Lexapro reviews say?
A:

Compared to other similar prescription medicines, Lexapro has generally received positive reviews from real users. This drug is well regarded, especially as a treatment for depression and anxiety.

Q:
Who is the company behind Lexapro?
A:

Lexapro is produced and marketed by U.S.-based Forest Laboratories Inc., in partnership with the Danish pharmaceutical company Lundbeck.

I had been taking the anti-depressant Nardel (phenelzine sulfate) for over 30 years and I had difficulty controlling weight. I then deliberately tapered off to half the dosage and to my delight lost over 15lbs . My doctor then suggested that I stop taking it all together as Nardel had become outdated and superseded by much advanced or better inhibiters. However, I decided on my own to cease taking anything at all. At first I felt good almost to the mind that I had beat those long years of experience in the dark. Then all of a sudden, around 5 – 6 months later I began to slip into a deepened mood decline of in the doldrums combined with lethargy, anxiety and diminished enthusiasm. There were times when I could hardly get out of bed in the morning. Nothing seemed interesting and I became overwhelmed with procrastination. I was prescribed Escitalopram at a dosage of 20mg daily. Now into my second month it has proved to be of good benefit by upping my mood and reviving my enthusiasm. However, I am quite disturbed with the return of obsessive eight gain. Has anyone else experienced this?

Title for your comment
Can't Be Sure........after many years
Have you tried this product?
Yes
Reply