Azilect is a prescription drug described as a treatment for many of the symptoms associated with Parkinson’s disease (PD). The formula is developed by Teva Pharmaceuticals Industries, a company that offers several categories of products targeted for different types of disorders. Their line of products comprises various products aimed to help people suffering from cancer, respiratory conditions, or special products designed to promote women’s health. The company leads an international business and prides with being one of the most popular producer of healthcare products.

Azilect drug is advertised as particularly beneficial for maintaining adequate amounts of Dopamine in the brain. This is an important neurotransmitter that plays several important roles in humans, including in movement coordination, memory, behavior, cognition, learning capacity, attention and mood. This drug is advertised as a way to maintain normal mobility in people who suffer from this neurodegenerative disorder, a common consequence of developing such a disease. Mobility impairment may manifest in the as slowness, tremor, stiffness, and/or trouble walking.

Azilect is specially designed for adults and can be administered as initial monotherapy or as adjunct therapy to levodopa (a common medication in Parkinson’s disease). It can be used as a stand-alone treatment (in early Parkinson’s disease) or with other medication when the disease is more advanced. The product is classified as a MAO-B inhibitor enhancing Dopamine levels.

Azilect is the brand name under which the single active ingredient called Rasagiline is marketed. An Azilect generic product seems to have been approved by the FDA, while other brands also commercialize products based on this chemical.
This compound is an irreversible monoamine oxidase type-B inhibitor (MAO-B). It is a common treatment prescribed for Parkinson’s disease. This condition is a chronic and progressive disorder known to be caused by reduced Dopamine levels in the brain. Rasagiline is also researched as a treatment for another neurodegenerative disorder called Alzheimer’s disease. The main advertised benefits of this inhibitor target enhancing memory, including in people who suffer from age-related memory decline, enhancing mood and increasing learning ability. Some of the most significant and severe symptoms of the disease involve incontrolable movement. These symptoms may manifest as shakiness, slowness, stiffness and even difficulty in walking. Azilect (Rasagiline) is capable to inhibit the action of the MAO-B enzyme which is responsible for the breaking down of Dopamine. This way, the neurotransmitter is able to enter the BBB (blood-brain barrier) and to accomplish its many important roles including in maintaining proper coordination and mobility.

One of Azilect’s most concerning side effects refers to it potentially increasing the risk of skin cancer, particularly in patients with Parkinson’s. However, this concern has not been supported by clinical evidence and the FDA approved this medication in the treatment of this disease. Other Azilect side effects mentioned by the manufacturer include flu syndrome, joint pain, indigestion, and depression. As an adjunct therapy, the drug may lead to dyskinesia, weight loss, vomiting, nausea, constipation, and others (all mentioned on the official page). The Azilect drug interactions include other MAOIs, meperidine, tramadol, methadone, propoxyphene or St. John’s wort.

People who suffer from moderate to severe liver disease should not use this medication.

3) What Does Azilect Do?

Men and women diagnosed with Parkinson’s disease are likely to have much lower levels of the neurotransmitter Dopamine in the brain than normal. Scientists estimate that up to 80 percent of Dopamine could be lost by the time an individual is diagnosed with the disorder. A small Dopamine level is a far-reaching condition, as it is believed that Dopamine controls movement and coordination in the human body, including simple tasks such as walking and raising the arms. According to the producing company, Azilect may improve Dopamine levels in the brain, enabling the patient to regain some of his or her mobility lost as a result of the cognitive disorder.

The latest research has shown that increasing Dopamine levels in the brain may be a good way to treat some of the Alzheimer’s symptoms. However, the average individual looking to boost his or her cognitive function may be better off using select natural supplements, according to many industry watchers.

Just like the majority of the prescription drugs available, a number of Azilect side effects are known to be associated with use: dizziness, nausea, sweating, and fainting. According to the website this is most common during the first couple of months of use and the side effects should lessen as the dose is regulated and the body adjusts to it. Azilect interactions may occur with some various antidepressants, appetite suppressants, MAO Inhibitors, certain ADD drugs, stimulants and some herbal formulations. The complete list can be consulted on the product’s website or with a healthcare practitioner.

This drug should be taken once a day and is offered in a pill form. It can be taken alone or with food. The dose depends on the severity of the treatment necessary for the individual. Typically, the doctor will start out with a small dose and then adjust it to a higher dose if needed and if permitted.

6) How Much Does Azilect Cost?

The cost of Azilect is moderate, but the fact that it has to be taken with other prescription medications can result in a higher overall medical cost per month. Aside from this, an Azilect generic alternative is available, at lower prices compared to the brand names that can offer this product. The generic can be found as Rasagiline, the key active substance of Azilect.

The suggested doe is 1 pill once daily, with or without food.

The Azilect drug is designed as a support in the treatment of a common degenerative disorder affecting elder individuals called Parkinson’s disease. The product is advertised to be helpful in relieving the symptoms involving mobility in these patients. This is one of the most common symptoms associated with the condition.
A study involving this drug has shown that the product is effective in increasing the available synaptic Dopamine with no significant adverse reactions as compared to placebo drugs. However, there are other clinical studies that failed to show such promising results. Based on these trials, some researchers have issued the statement that further research is needed before drawing a medical-evidence consolidated conclusion.

In any case, the main aspect to be kept in mind is that this product may become very dangerous if combined with other drugs or if it is used by certain categories of people. For complete information about the safety of this medication it is imperative to consult a healthcare practitioner. 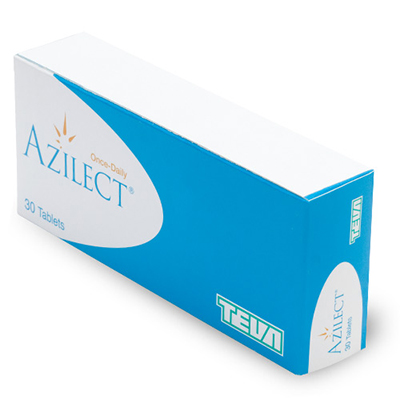 Q:
Azilect is all about what?
A:

Azilect is a pharmaceutical drug designed to treat Parkinson's disease in various phases of the condition. The drug is manufactured by Teva Pharmaceuticals. The Azilect drug is available by prescription only and is claimed to be able to reduce the symptoms of Parkinson's disease: shaking, tremors, slowness of movement, aching muscles or stiffness, trouble walking normally, a decline in facial expressiveness and even smaller handwriting.

It works by improving Dopamine levels in the brain, enabling the patient to regain some mobility lost due to the cognitive disorder. The product contains rasagiline and mannitol . Azilect side effects are dizziness, nausea, sweating, and fainting, while interactions of Azilect are numerous and potentially dangerous. The dosage is 1 pill a day but it can be higher if needed. Azilect generic is also available in the form of rasagiline.

Cognitive disorders like Parkinson's disease often affect both the patient as well as his or her loved ones. Parkinson's disease is still under research, and new results are provided almost every year. Based on these discoveries, pharmaceutical companies can develop and produce more effective treatments. Unfortunately, the battle with this terrible disease is far from over. Perhaps one day there will be a clear cure and preventative measures, but for the time being, there are only prescription drugs, such as this one, that hope to reduce the symptoms of the disease. The Azilect side effect, as well as important drug interactions and precautions, should be accounted for before starting treatment.

According to its manufacturer, this drug may enable those diagnosed with this cognitive disorder to regain some of their lost mobility. However, even though Azilect may increase the Dopamine levels in the brain, it is not likely to be appropriate for general use by the average individual.

I was introduced to HERBAL HEALTH POINT and its effective PD treatment protocol in February last year. I immediately started on the herbal treatment, it relieved my symptoms significantly. The first month on the treatment, my tremors and muscle spasm mysterious stopped, had improvement walking. Since treatment, I have been symptom-free and life is really good

Title for your comment
PARKINSON DISEASE
Have you tried this product?
Yes
Reply
Josiah

I take this once in the morning before breakfast for about 4 months. At the beginning I was really tired and had headaches but after a time these things disappeared. Right away the pain from the stiffness and dystonia has lifted and I can type better at work.

I use Azilect but it doesn’t help me at all. At least the only good thing is that I don’t have side effects from it.

Azilect, in my opinion, is a terrible drug and almost killed me.
The adverse reactions manifested over 18 months then exponentially
increased when prescribed carb/levo but that was after starting. The 2014 added warnings were exactly
what I was suffering but no one notified me of the changes and I was too incapacitated to respond though I informed my doctor every 60 days. Since going off I am recovering.