Wheat Grass Barley Grass Organic 100% Juice Powder is promoted as a dietary supplement that has been created to maximize vitality and health. Its two components are herbal extracts which are known under the name of “rejuvenation elixirs” and should prove reliable in the process of energizing the body.

The manufacturer of Wheat Grass Barley Grass Organic 100% Juice Powder is Vitality Products, a company headquartered in USA and founded by L.W.Bob Brooks in 1980. Their stated purpose is “raising the standard of Nutrition and Wellness,” so that everybody can benefit from quality remedies.This product is not recommended for people who are allergic to “grass” and pregnant or lactating women.

Providing a natural response for people who are in search for an energize booster, Wheat Grass Barley Grass Organic 100% Juice Powder is a dietary supplement that contains two herbs. One of these is Wheat Grass, known as a powerful stimulant of the metabolism. Moreover, research showed that it may increase red blood-cell count and lower blood pressure. Another benefit of this herb relies on its quantity of enzymes and amino-acids, thus potentially proving effective in the detoxification process of the human body.Recent studies revealed that Wheat Grass may neutralize toxins and prove effective when fighting against tumors.

The other component of the remedy is Barley Grass, one of the first cereal grain cultivated, according to some historians. The first uses in medicine have been reported around 7000 BC, in Asia. Some studies say that gladiators utilize this herb for its stamina increasing properties.

Barley Grass provides antioxidant qualities, thus protecting the body from free radicals. However, further research is required in order to generally demonstrate this effect within humans. Another possible quality of this plant is the fact that it protects the body against carcinogens.

Wheat Grass is known to be a powerful stimulant for the metabolism. Also, research has shown that it might even lower blood pressure and increase red blood cell count. Some scientists discovered that Wheat Grass might also be beneficial for the detoxification process of the body and also a good protector for the blood and for the liver due to the quantities of amino acids and enzymes that it contains. Recent studies have also shown that Wheat Grass might also be useful when dealing with tumors, as it can neutralize toxins and fight tumors without all of the usual toxicity that other drugs might create in the body after usage. Wheat Grass can also be a good alleviator for diseases and injuries of the skin.

According to some historians, Barley Grass is one of the very first cereal grain cultivated by humans, and it was reportedly used first in medicine in about 7000BC. In ancient Asia, Barley Grass and Wheat Grass were part of the population’s diet since almost 4000 years ago. Gladiators also used ate these herbs to increase their stamina.

Barley Grass also has been proven to be a powerful antioxidant. Antioxidants protect the body against damaging free radicals. However, extensive research is needed to demonstrate the extent of its Effectiveness in humans. Mostly, scientists agree that Barley Grass has benefic properties on the human body. Also, some studies have gathered results pointing towards the fact that Barley Grass can protect the human body against carcinogens, thus reducing the risk of cancer. Also, Barley Grass has been found to protect against radiation and free radicals due to its antioxidative properties.

Wheat Grass Barley Grass Organic 100% Juice Powder can be purchased on the manufacturer’s website at an affordable price and is available both in bottles containing 120 capsules and also in the form of a powder of 4 oz. (113.3 grams). The product can also be found for purchase from various other online retailers that might offer discounts and promotions.

No side-effects are mentioned by the manufacturers and no client testimonials can be found online, thus the product’s efficacy remains questionable.

All in all, Wheat Grass Barley Grass Organic 100% Juice Powder is a natural supplement, intended to increase the health and vitality of the individual. The benefic effects of the two main components have been known for thousands of years and were used in Asian traditional medicine. On the other hand, further research is required in order to demonstrate their effects on human and to notice the relevance in the manufacturer’s claims. Side-effects are not mentioned by the manufacturer, but if any occurs, it is advised to immediately stop the treatment. 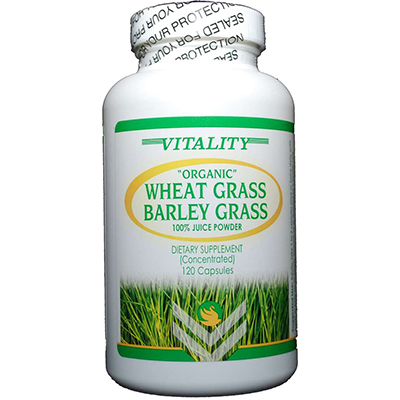 Q:
Wheat Grass Barley Grass Organic is all about what?
A:

Wheat Grass Barley Grass Organic 100% Juice Powder is a product designed to maximize vitality and health. It contains two herbal extracts that are sometimes called "rejuvenating elixirs," due to their known energizing qualities. The manufacturer is Vitality, a company with more than 30 years of experience whose main goal is raising the standard for wellness and nutrition. However, this remedy is not recommended for people taking blood thinning or anti-coagulant medication.

Wheat Grass Barley Grass Organic 100% Juice Powder is a dietary supplement intending to increase the overall health of the individual. The beneficial effects upon the human body of these two herbs are known for millennia. Wheat Grass and Barley Grass have been used in traditional Asian medicine for more than 4000 years. Extensive research is needed to prove all of their effects upon the human body and to demonstrate without a doubt these herbs properties. However, until now, research has shown that their usage might be beneficial. Thus the supplementation of the diet with these herbs might have positive effects upon the individual using them.