Astaxanthin Review – 6 Things You Should Know

Astaxanthin is a pink-red pigment found in various seafood such as krill and salmon and also in feathers of quails and flamingoes. It is both hydrophilic (soluble in water) and lipophilic (soluble in fat) which makes it unique compared to most other antioxidants. It has been cited as 500 times more potent antioxidant compared to vitamin A & E. It is a proprietary supplement offered by “Dr. Health” and touted to improve eye health, blood circulation, anxiety, fatigue and prevent various types of cancer. Besides its numerous advantages to other body systems, it is also claimed to improve mental health, concentration, clarity and cognitive function.

Astaxanthin supplement is claimed to support numerous health benefits such as supporting healthy immune function, combatting oxidative stress, promoting joint health and increasing energy levels. Human research on astaxanthin is currently limited but has been shown to help protect the cardiovascular system and support brain health. This product has also been studied for its effects on high cholesterol levels, cancers, age-related vision problems and various mental disorders, such as Alzheimer’s disease, stroke and Parkinson’s disease.

Cells of the human body are attacked by millions of free radicals (reactive oxygen and nitrogen species) every day. These free radicals are produced naturally as part of the normal human metabolism, but over time their excessive accumulation can result in damage to the body. Astaxanthin is widely reported as one of the strongest known natural antioxidants. Regarding antioxidant property, astaxanthin is ten times more potent as beta-carotene and at least 550 times stronger than vitamin E. It can prevent some of the effects of aging and reduce the risks of developing various diseases and cancers due to excessive sun exposure.

Inflammation occurs when the body is exposed to some trauma. In the short term, it causes swelling, redness, heat and pain to promote the healing process. Mounting clinical evidence shows the anti-inflammatory properties of Astaxanthin. It has been demonstrated to decrease the synthesis of inflammatory mediators in the body and therefore helps in improving tendon, ligament, bone and joint health.

It is free from gluten, lactose, pesticides and caffeine. No potential side-effects have been reported with this product. It can be used between 4 mg and 40 mg dose per day without causing any side effects for up to 12 weeks.

Astaxanthin supplement is the leading commercial source of the natural astaxanthin and is found to be very effective in helping the body skeleton, reducing the damage caused by free radicals, neutralizing the pro-inflammatory mediators and improving the overall body health. A pregnant or nursing woman is advised not to use astaxanthin until more is understood about its effects on pregnancy and breastfeeding. Talk to your physician about the safety and efficacy of using astaxanthin before purchasing this product. Let your doctor also know about the pre-existing health problems you have and any prescription or supplements you are using before. 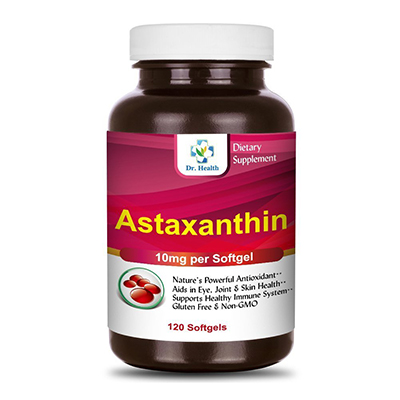