Krill Oil is offered as an antioxidant support that features adequate amounts of fatty acids for the maintenance of normal heart, brain, and eye function, normal blood pressure and cholesterol levels.
The formula is offered by Nature’s Own, an UK based company that offers a relatively large number of nutritional supplements aimed to help in the treatment of different health concerns (digestion, immune deficiencies, joint problems, stress disorders, thyroid problems, etc.). The manufacturer claims to formulate only superior formulations processed through quality controlled processed, in strict compliance with current GMP regulations.

Krill Oil is part of the Fish Oils& Omega Oils line of dietary supplements. The raw material for this formula comes from one of the leading suppliers of Krill oil called Neptune NKO. The superiority of this raw material comes from the fact that is contains a form of Astaxanthin that is totally absorbable which potentiates the antioxidant effect of the supplement. The formulation is advertised as free of genetically modified substances and also of artificial chemicals and substances with a high risk of causing allergies (yeast, starch, gluten, etc). Krill Oil is recommended for both adults and children. The age limit is not mentioned by the manufacturer.

Krill is a species of crustaceans similar to shrimp known to live mostly in cold waters. They are used both as food and as supplement. They are considered one of the richest and purest animal source of Omega-3 fatty acids (EPA and DHA being the most important) and other nutrients necessary for a healthy overall function.

EPA and DHA, are very popular nutrients clinically researched in thousands of medical studies and trials due to their important benefits on the cardiovascular and nervous systems. Although these studies support the believed benefits of these nutrients, there are many researchers who believe that the existing evidence is insufficient, recommending more research. EPA and DHA have been shown to play important roles in the formation of certain essential neurotransmitters needed for proper neural communication (such as Phosphatidylserine), in brain growth and development (particularly in the early stages of life), in maintaining optimal brain function and preventing inflammatory processes. Omega-3 supplements claimed ailments cover a wide range of health concerns including joint problems (advertised to reduce stiffness and pain), neurodegenerative disorders such as Alzheimer’s, memory loss caused by aging, mood disorders, high cholesterol, poor blood circulation, etc.

Another beneficial nutrient provided by Krill is Choline, a vitamin B like compound responsible for protecting cell membranes and facilitating neurotransmission. It is also necessary in the synthesis and transport of fats from the liver (preventing fat accumulations in the liver). It is also the precursor of an important neurotransmitter known as Acetylcholine which plays an important role in maintaining a healthy memory and supports normal brain function. Current studies seem to supports its benefits in supporting healthy brain cells membranes and increasing Phosphatidylcholine levels in the brain. Only very high doses of Choline have been shown to cause unwanted side effects including gastrointestinal discomfort, sweating and fishy body odor.

3) Is Krill Oil Right for You?

Krill oil these supplements as one of the richest sources of the popular Omega-3 fatty acids EPA and DHA. It is also marketed as more efficiently absorbed due to the form in which the active substances are found (the phospholipid form). Some researchers have claimed that the absorption rates of these supplements are up to 60% higher than those of fish oil.

Manufacturers of Krill oil based supplements also claim that these products provide increased amounts and number of beneficial substances in smaller doses, which makes them a more comfortable alternative for those who have trouble ingesting numerous capsules.
However, there also seem to be some disadvantages associated with krill-based formulas, one of the most important being the reduced decomposing period of this oil as compared to fish oil. This makes the krill a much more perishable source of fatty acids and increases the processing costs. Still, many adepts of these supplements claim that the numerous benefits outweigh the few disadvantages of such formulations.

One of the most advertised qualities of Krill is that of providing noticeable amounts of a highly potent antioxidant called Astaxanthin, a substance which is not present in other fish or another source of anti-oxidants. Astaxanthin is considered a carotenoid, a substance that gives the bright color of certain low-chain plants used as food by small sea animals (including krill). It has been researched as a potential protection against UV damage (particularly to the human skin), for its increased antioxidant effect (with benefits on the general health), anti-inflammatory effects, etc. The existing research involving the compound is available for online consulting.

Krill Oil is not recommended for those suffering from liver conditions, or those under anti-thrombotic drugs without the consent of a healthcare practitioner. Krill oil side effects include fishy odor, allergic reactions, and digestive discomfort.

Krill Oil comes in bottles of 60 capsules which provide the sufficient amount for 1-2 months of regular use (without exceeding the recommended dosage). The standard price is moderate. At the moment at this review, the manufacturer offers a relatively high discount for purchasing this formula by online order directly from the official page. For a full refund, the consumer may return the undamaged product within 28 days of its purchase. The details regarding the refund policy can be found by contacting the company’s Customer Service department.
The formula can also be delivered internationally. Overseas delivery comes with specific shipping taxes, depending on the weight and the delivery country.

Krill Oil features 500mg of Pure Krill Oil per capsule which is a common amount included in dietary supplements. The suggested dose is 1-2 capsules daily or as recommended.

8) Our Verdict on Krill Oil

Krill Oil is a single active ingredient supplement aimed to support the general well-being of its consumers by maintaining the functioning of certain systems and organs of the human body. The nutrients provided by the formula have long been researched in the attempt of finding solid evidence of their benefits for human health. However, there is still a lot of controversy regarding the mechanism of action, actual effectiveness, and unwanted reactions that may occur when using them.

Krill Oil is not an innovative product, but benefits of a detailed description in terms of benefits, origin of the active substances and the amounts provided by each serving, which is an indication that the formula may be a high quality product. The information provided on the official site may be verified by online consulting (existing studies, medical publications, and trials involving the feature compounds). 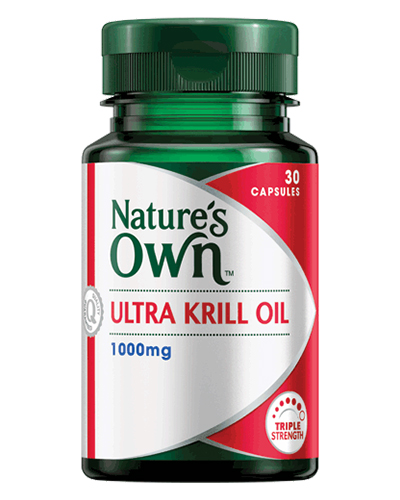 Krill Oil is a nutritional supplement advertised as a multi-beneficial product effective in supporting the health of the cardiovascular and nervous systems. The manufacturer of the supplement is an UK based company specialized in developing such products.

This formulation features a total of 500 mg pure Krill Oil per capsule from one of the leading suppliers of this ingredient, called Neptune NKO. The formula is advertised as suitable for people at all ages, including children, if a specialized practitioner has approved its use. Its high quality is also proven by the lack of genetically modified substances and artificial substances (colorings, sweeteners or preservatives).

Krill Oil seems to be a natural source of Omega-3 fatty acids and antioxidants, nutrients that have been scientifically shown to support a healthy brain function, heart, and vision function.

Krill Oil is one of the many formulations of its type, advertised to bring important antioxidant benefits to its users. The distinction between this supplement and those offered by the competitors consists of the high-quality source used by Nature's Own, a patented form of Krill Oil that features a totally absorbable form of Astaxanthin. The formula is also advertised as suitable for those suffering from Candida and yeast sensitive. The product lacks any other common allergens, including gluten, wheat, or starch, artificial coloring, sweeteners or preservatives. A moderate number of testimonials are also available on the official page under the “Reviews" section. These tend to be mostly positive. Unfortunately, we could not find such reviews from external sources (such as retailers' web pages or specialized sites).

As with all dietary supplements, it is always preferable and recommended to consult a specialized practitioner before starting a self-administered treatment.

Nature’s Own formula has helped me lower my cholesterol levels in a healthy and safe way. Thank you for this wonderful product!

I like this Krill Oil supplement because it is easy to swallow and does not cause any fishy burps. I have tried other fish oil supplements, but the one offered by Nature’s Own meets all the requirements: good price, high quality source of the Krill, and noticeable benefits.