Smart Catch Fish Oil For Teens is a supplement of fish oil and vitamin E, promising to help keep a healthy brain and good vision, along with improving mood. It’s produced by Carlson Labs, founded in 1965 in Chicago. For over fifty years they’ve been a family-owned quality-focused business, currently located in a suburb of Chicago. The company claims to be very quality-centric, using only the freshest, purest, award-winning ingredients.

Their slogan is “Choose quality. Choose Carlson.” One of Carlson Labs’ unique offerings is unaccredited courses. People can learn about the natural products industry, get course completion certifications, and possibly earn free or discounted Carlson supplements. The only caveat is that this is only open to retailers, those who sell Carlson items. The company as a whole sells over 250 products, generally fish oils and vitamin supplements for various nutritional desires.

1) What is Smart Catch Fish Oil For Teens?

Each bottle of Smart Catch has months’ worth of capsules that you can take daily for 1000 mg of quality fish oil each time. Pills don’t have as many Omega-3 fatty acids as similar products, since this is aimed toward teenagers instead of adults, who tend to have smaller dietary needs. However, DHA and EPA, along with other fatty acids, are essential for growth and development in children and teenagers. A below-average dose may not be optimal. Even so, 1000 mg of fish oil a day still gives you almost all of fish’s benefits as a brain food.

3) Is Smart Catch Fish Oil For Teens Right for You?

Compared to other Carlson Labs fish oils, this one contains fewer concentrations of Omega-3s, a mere 350 mg. It’s still a good amount, and you’re still getting 1000 mg of fish oil per capsule, but older teens may wish for an adult fish oil supplement. Lower amounts of fatty acids for a lower age group makes sense, but DHA and other Omega-3s are still important for facilitating mental development.

Fish oil is often considered most effective in the young and the old. It helps cognitive function and behavior in children and teens. In older adults it can maintain blood pressure, heart health, memory, and more. It’s definitely important for people of all ages to have fish or fish-derived supplements in their daily diet. Different age groups don’t necessarily need different amounts of DHA in their diets.

The oil for Smart Catch is derived from anchovy, mackerel, and sardine. Each capsule has Carlson’s signature lemon flavor added, improving the taste, and making it more palatable for picky eaters.

5) Precautions of Smart Catch Fish Oil For Teens Use

6) How Much Does Smart Catch Fish Oil For Teens Cost?

Bottles contain 90-180 capsules depending on which one you want to buy. The directions are to take one a day, so each bottle lasts up to three months. This makes Smart Catch a very cheap supplement. It’s also easy to buy, since countless stores all around the USA carry it, and it’s sold online as well. Even Amazon has it. It’s a great deal for people looking to buy a fish oil supplement.

Fish oil’s benefits are myriad: cardiovascular health, cognitive development, joint health, and more. Even in lower amounts like Smart Catch’s 350 mg of Omega-3s per dose, you’re still getting a lot of benefits for a low cost, making it easy to recommend Smart Catch for most people.

It seems smart to buy some Smart Catch. Fish oil with high amounts of Omega-3s carries great long-term results for people of all ages and needs. While Smart Catch doesn’t have the most fatty acids, it doesn’t have the least either. It’s a good buy that won’t break the bank, and yes, it delivers on its promises. There’s no reason to not consider buying Smart Catch Fish Oil For Teens by Carlson Labs. This is a company with high standards and a reputation for quality products. Like most of Carlson’s things, Smart Catch has been tested by an independent FDA-registered laboratory to ensure potency and purity. 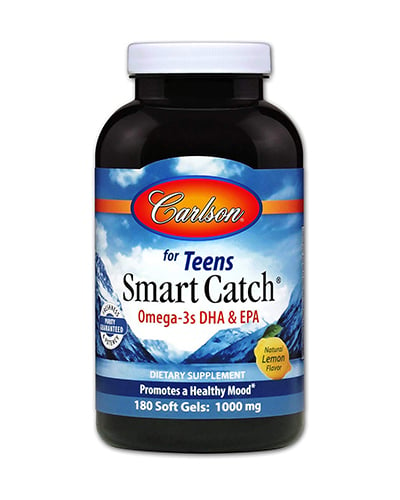 clear
Q:
What are the Smart Catch Fish Oil For Teens ingredients?
A:

Just about any amount of fish oil will bring positive long-term results into your life. There aren't many reviews online for Smart Catch, but of the ones that do exist, they speak well of it. One reviewer noted that while they liked the EPA levels in Smart Catch, they said their kid disliked the size of the capsule. Carlson Laboratories promises that most of their capsules are small and easy-to-swallow, so perhaps this product is a slight departure from the norm. It may also be a case of personal preference. At any rate, there is plenty of evidence to suggest that Smart Catch is a smart buy.