Lem-O-3 is advertised as a dietary supplement based on the positive effects of Omega-3 and with a lemon flavor that has been especially created to help maintain the viscosity of the blood within normal limits, hence preventing a possible cardiovascular problem. The company behind this product is called Cytoplan. The manufacturer takes pride in itself due to the fact that is has an immense portfolio containing a variety of amino-acids, mineral, herbal, and vitamin based products. The company was founded in the United Kingdom in 1990.

Recent studies revealed the general health benefits provided by usage of fish oil. This particular research was directly linked to the diet of the Eskimo. Because the Eskimos consume fresh fish oil every day and they rarely had cardiovascular issues, there was a link formed between the proper amounts of Omega-3s and a proper functioning cardiovascular system.
Additionally, they found a connection between the normal brain functioning and the fatty acids from the oil. Moreover, there are some clinical studies that link DHA to the normal brain development in infants.

The manufacturer has three products whose effects are based on fish oil. There are: Standard Fish Oil, Lem-O-3, and Fish Oil capsules. However, Lem-O-3 differentiates itself from the other due to its lemon-flavor.

Created to provide the necessary amounts of Omega-3 fatty acids, Lem-O-3 is a supplement that is recommended both for adult as well as children usage. Due to the fact that the human body needs sufficient Omega-3 and Omega-6, if a person is unable to receive them from their daily diet, they should try nutritional supplementation instead.

Studies revealed that the main fatty acids found in Omega-3 are EPA and DHA. Both play an important role when it comes to reducing the inflammation or offering blood-thinning effects. Moreover, Omega-3 may drastically reduce risks of strokes, coronary artery disease and heart attack.

Related to the cognitive system, Omega-3s are regarded as possessing a positive influence when it comes to alleviating or treating depression, bipolar disorder or mood disorders. In addition, there were some clinical trials that showed the effects of these fatty acids in slowing down memory issues related to aging processes. Therefore, older people can lower the risks of Alzheimer’s or dementia by consuming Omega-3 on a regular basis.

If you prefer an omega-3 supplement with coconut oil, we recommend checking out our Brain Armor review.

Designed to offer the necessary daily intake of Omega-3 fatty acids, Lem-O-3 represents a supplement which is suggested for both children as well as adult usage. The human body usually requires sufficient amounts of Omega-3 and Omega-6, but because the consumption of fish has been dramatically altered in the past few years, the Omega-3 to Omega-6 ratio has decreased.

This means that more people should start using dietary supplementation to obtain a balance. Research showed that the primary Omega-3 fatty acids are represented by DHA and EPA. They play a role when it comes to inflammation reduction while also offering blood thinning properties. Therefore, Omega-3 can reduce the risks of heart attacks, strokes, and coronary artery disease.
When it comes to the cognitive system, Omega-3s are known for their influence on depression, mood disorders, and bipolar disorder. Some clinical studies also revealed that these fatty acids might help slow down memory issues related to the aging processes. This means that older people may lower the risks for Alzheimer’s or dementia by consuming Omega-3s in their daily diets.

On the other hand, Omega-3s may interact with blood-thinning drugs and eventually cause excess bleeding; caution is advised for people who are already on a similar treatment. Unwanted side-effects may also include fishy taste, loose stools, and nausea.

There are online testimonials about Lem-O-3. What is being reported includes the following:

Sold in a liquid form by bottles containing 200 ml, Lem-O-3 is a moderate-priced product that can be easily afforded by everyone desiring to follow this treatment. Recommended daily intake varies with age. This means that babies who aren’t yet one year old have to take 1 ml per day, children with ages between one and two 1.5 ml, between three and five 2ml, between six and ten 2.5 ml and over 11 years or adults up to 5 ml. Therefore, a bottle may last up to forty days of treatment. The product can be purchased either from manufacturer website or other online retailers.

However, Omega-3 can interact with most of the blood-thinning medication and can even lead to excess bleeding. This is the reason for which most of the manufacturers recommend people who are already on a blood-thinning treatment to avoid Omega-3 based supplementation.

By being praised as an Omega-3 deliverer, Lem-O-3 is found by bottles in a liquid form that lacks the usual fishy smell which has been replaced with a lemon flavor. Overall, it represents a good alternative to normal medication that usually leads to more unwanted side-effects. In comparison with similar supplements, this particular one can be taken both by children and adults. Even though the low number of online consumer testimonials can be regarded as a lack of effectiveness, the experience of the manufacturer puts the product back on the map. All in all, Lem-O-3 is an affordable product that can be taken by anybody who desires an overall health improvement. 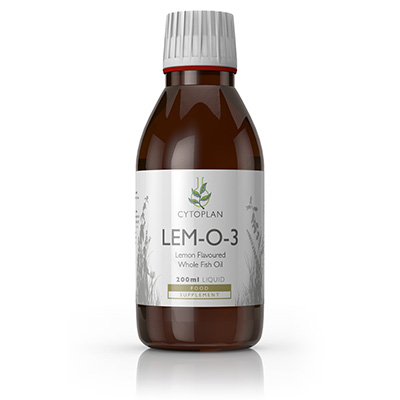 Lem-O-3 represents a dietary supplement designed to enhance the cardiovascular and cognitive system, thus avoiding diseases like Alzheimer's and dementia, as well as complications of the heart like strokes or coronary heart disease. The business that offers the product to the world is called Cytoplan and has been on the nutritional market for more than thirty years. Lem-O-3 relies on the positive effects of its contained fatty acids EPA and DHA that possess qualities backed up by clinical studies.

By promising to deliver Omega-3 essential fatty acids in a liquid form that lacks the fishy taste that has been replaced with a lemon flavor, Lem-O-3 represents a good alternative to harsh medication for people suffering from memory or cardiovascular problems. This formula can be taken by both children and adults, but their daily recommended dosage varies. Despite the fact that there are few client testimonials available online, the remedy's Effectiveness relies on the experience of the manufacturer when it comes to nutritional market. Compared to other similar products, Lem-O-3 is provided in a liquid form easily affordable by anyone who desires to follow this treatment.

I did notice the benefits too, with stress and pregnant-brain-fog. And I feel good that my baby got the nutrients. I’m looking forward to observe the effects on the long-term usage.

If you’ve ever burped after taking fish oil, you know that it can be pretty foul. This product is worth the higher price just for the sheer fact that you DON’T burp that nasty fishy taste.