Brain Armor is a nootropic advertised for active adults who want to improve their performance by boosting brain function.

One of the key ingredients in Brain Armor is Omega 3, a powerful brain nutrient. Unlike most supplements, they made sure to source it from algae, making it vegan-friendly.

Is Brain Armor enough to take your brain function to the next level? Read our Brain Armor review to find out.

1) Brain Armor at a Glance

2) The Company Behind Brain Armor

The formula was developed by DSM Nutritional Products, a sub-business of DSM, one of the largest international corporations. DSM is a Dutch corporation that produces everything from supplements and medical devices to electronics to paints.

They have since formed an official Brain Armor company that entirely focuses on brain-support products. They have different blends for:

They also have a special gut-health formula and a liquid concentrate.

Omega 3 is a universal nutrient that everyone needs more of, mainly because the most common source is fish and people don’t really have a daily or even weekly serving of fish.

Medium chain triglycerides are the good kind of fat you want in your system. They’re mostly known for their keto benefits (because they promote ketone production), but the fatty acid also supports brain energy, keeping you mentally alert.

We think Brain Armor is a good brain health supplement. Whether it will actually boost brain function that can translate to better physical performance is up for debate, however.

That’s because Brain Armor works best for those who are deficient in omega-3. If you’re not exactly missing out on omega-3, you might not feel any immediate effects.

We still say Brain Armor is a good brain health supplement because omega-3 is always a good nutrient. Its importance in our diet grows as we age, so more DHA is almost always a good thing.

The medium chain triglycerides only work best for those on a keto diet. Otherwise, the user won’t really feel it working.

Brain Armor is built with vegans and keto dieters in mind, so they made use of ingredients mostly considered as premium because of the quality and safety checks they go through.

Because of those reasons, the chances that you will experience side effects is low.

7) Where to Buy Brain Armor?

Brain Armor is sold on their website and is available at CVS, Amazon, and other online supplement stores.

For Adults, take 2 softgels with a meal or as directed by your healthcare professional.

Brain Armor is a great brain health supplement with benefits that only grow more crucial as we age. It contains premium forms of vitamins, omega 3, and medium chain triglycerides.

The only downside to Brain Armor is how it doesn’t have any immediate effect, which could harm its reputation due to the number of claims it has on the website regarding mood, productivity, and memory.

So long as the consumer understands that the effect is silent, but grows over time, Brain Armor should be a good brain supplement to try. 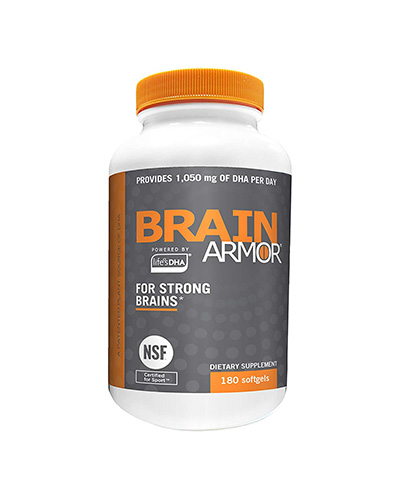 clear
Q:
What are the Brain Armor ingredients?
A:

Brain Armor is a nootropic that promotes long-term brain health and function that works better as we age.

Q:
Where can I buy Brain Armor?
A:

Brain Armor is sold on their website and is available at CVS, Amazon, and other online supplement stores.

Q:
How much does Brain Armor cost?
A:

Q:
What are the advantages of taking Brain Armor?
A:

The clear benefit is long-term brain health and function, which is especially important as we age.

Q:
How should I take Brain Armor
A:

For Adults, take 2 softgels with a meal or as directed by your healthcare professional.

Q:
How do I contact Brain Armor customer service?
A:

Q:
Who makes Brain Armor?
A: