Salmon Oil And GLA is a fish oil supplement with vitamin E and GLA from borage seed oil. It’s supposed to support mental and cardiovascular health, along with helping your joints and vision. This is one of over 250 products sold by Carlson Labs, an Illinois-based company founded in 1965. Carlson is a transparent company with an apparent focusing on quality and delivering results to their customers.

One soft gel capsule of Salmon Oil contains 825 mg of fish oil, 155 mg of Omega-3s, 10 IU of vitamin E, and 40 mg of GLA (an Omega-6 fatty acid). Omega-3s are always great and most people understand the many benefits they have. GLA is something we hear less about it, so there are often questions. Borage is a plant where every part is useful, as its leaves and flowers are used in many medicines. It’s often used to help treat fever, cough and depression. The seeds can be pressed for an oil, which typically benefits your lungs and joints. GLA is generally considered important due to its role in reducing inflammation while promoting cell growth, and there’s the fact that the human body doesn’t produce GLA on its own.

2) Details on Salmon Oil And GLA Ingredients and Uses

3) What Does Salmon Oil And GLA Do?

Every serving of Salmon Oil contains 825 mg of fish oil from salmon, anchovy, sardine, and mackerel. This is a little less than the standard 1000 mg fish oil that Carlson uses in most of their products, but also results in a smaller capsule size. The three non-salmon fish are included in relatively small amounts for their benefits, such as DHA and EPA. This supplement has 155 mg of these Omega-3s in each pill, plus 10 IU of vitamin E. If it was just these ingredients, this would be a somewhat lackluster supplement despite its effectiveness, but this includes GLA from borage seed oil.

GLA, or Gamma Linolenic Acid, is a fatty acid found mostly in plant seed oils. It’s an Omega-6 essential fatty acid that they human body can’t make on its own. Like the popular Omega-3s, they are important for cognitive function and development. Studies additionally link Omega-6s to bone health, a better metabolism, and slightly improved health for your skin and hair. Some Omega-6s promote inflammation, while others and Omega-3 fatty acids reduce inflammation. GLA is one of the Omega-6s not responsible for inflammation, but a typical diet doesn’t contain that much of it. People get a lot of Omega-6s in general, much more than Omega-3s despite Omega-3s generally being more important, but GLA often doesn’t make its way into those high numbers. Therefore a supplement including it can be important.

5) Precautions of Salmon Oil And GLA Use

6) How Much Does Salmon Oil And GLA Cost?

It’s sold in hard plastic bottles of 60, 120, and 240. The 120 count bottles are fairly popular on Amazon and are very inexpensive. You can buy them online or in local stores for a price well under MSRP and even with free shipping. Few products have this quality while staying so inexpensive.

Having a healthy balance of certain vitamins and minerals assists GLA in working well for you. These include magnesium, zinc, vitamin C, and B vitamins like B3 and B6. You should not take any Omega-6 supplements if you’re pregnant, an infant, diabetic, or prone to seizures. It may also have adverse reactions when combined with aspirin, cyclosporines, or phenothiazines. The exact dose of GLA you might need varies depending on your physical condition. It’s best to ask your doctor about your Omega-6 levels before taking too much GLA.

This is a high quality supplement at a reasonable price, like many of Carlson Laboratories’ products. Most people don’t need additional Omega-6 fatty acids in their diet, but GLA is often an exception. Salmon Oil And GLA combines essential Omega-3s with high quality fish oil and GLA to deliver extra benefits that just about anyone should take advantage of. This doesn’t have the most EPA or DHA, as most people want, but it does offer more than just that. This is a recommended product especially if your doctor says you need more GLA. 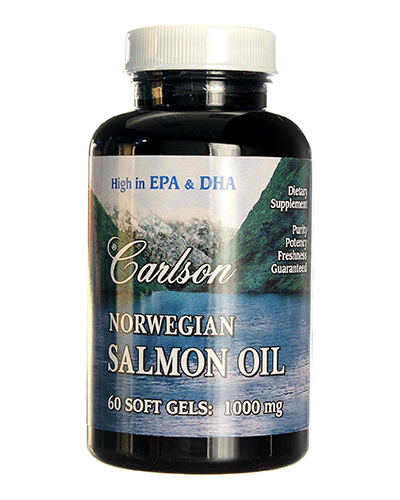 clear
Q:
What's inside Salmon Oil And GLA formula?
A:

Q:
Will Salmon Oil And GLA improve brain health?
A:

This is something that would be effective for a variety of people, especially those already taking some fish oil. Instead of taking two or more doses of whatever you already have, Salmon Oil can supplant it with additional Omega-3s and the Omega-6 GLA. This could help you achieve more of a balance while giving you more fish oil for heart and brain health. On its own, this is a product that's good for people who need more GLA in their diet, but it does have the potential to beef up benefits you're already getting in decent amounts.