EPA Plus Review – 8 Things You Should Know Before You Buy

EPA Plus is marketed as a fish oil concentrate rich in Omega-3 fatty acids EPA and DHA designed to support a healthy heart and brain function. The formula is manufactured by an experienced manufacturing company called Life Plus. The company has been manufacturing and selling dietary supplements (vitamins, minerals and condition specific formulas) for more than 30 years and currently conducts business in over 65 countries. The company operates after a business model called referral marketing, one which compensates current customers for any new customers referred to the business.

EPA Plus is designed for adult use. Precautions refer to pregnant and nursing women as well as those who plan on becoming pregnant.

EPA Plus contains two essential Omega-3 fatty acids, particularly EPA and DHA. There is scientific evidence that supports their benefits in ensuring the health of the heart and circulatory system, brain and central nervous system and eyes, as well as promoting emotional well-being and positive mental outlook. While both have been shown to have neuroprotective abilities, DHA is appears to play an essential role in pre- and postnatal brain development, whereas EPA seems to have more influence on behavior and mood.

Their neuroprotective properties have been tested in numerous researches and clinical studies which indicate that Omega-3’s may help with alleviating symptoms or treating mood disorders such as depression, attention disorders such as Attention Deficit Hyperactivity Disorder (ADHD) and Attention Deficit Disorder (ADD). There is also preliminary evidence that Omega-3’s may ease symptoms of Bipolar Disorder, borderline personality disorder and migraine headaches.

A daily dosage for EPA and DHA has not been established yet. However doctors recommend that it does not exceed 3 grams of fatty acids per day. Side effects associated to Omega 3 are rare but may include gas, belching, bloating and diarrhea. There is also some concern that Omega-3 may cause the blood to thin and cause excess bleeding, especially in people taking anticoagulant drugs.

EPA Plus is a mixture of Omega-3 fatty acids and Vitamin E claimed to promote wellness, improve overall health and prevent some illnesses.

This formula contains Omega-3 fatty acids extracted from the flesh of cold fish and other forms of sea life. Nutritional research has revealed significant evidence that a concentration of these marine lipids in the diet improve overall health by helping to nutritionally support the natural control of blood lipids, such as maintaining already healthy cholesterol levels within the normal range. This contributes to support the endocrine functions and at the same time support many enzyme functions in the body, which play a fundamental role in neurological functions as well. Eicosapentaenoic Acid (EPA) is thought to possess some beneficial potential in mental conditions, such as schizophrenia.

Several studies report an additional reduction in scores on symptom scales used to assess the severity of symptoms when new EPA is taken. Docosahexaenoic Acid (DHA) is a major fatty acid in sperm and brain phospholipids and the retina. Dietary DHA may reduce the risk of heart disease by lowering the level of blood triglycerides in humans. Below-normal levels of DHA have been associated with Alzheimer’s disease. A low level of DHA is also spotted in patients with retinitis pigmentosa. Some studies also suggest it may have anti-inflammatory effects.

The recommended dosage is one tablet three times a day with meals.

Testimonials about EPA Plus are posted online. What is being stated includes the following:

5) What You Need to Know Before Taking EPA Plus

6) How Much Does EPA Plus Cost?

EPA Plus is sold by 90 capsules, enough for a month’s supply. Compared to similar products, it is averagely-priced and has good value.

To acquire this supplement, one must get in touch with the manufacturer as it cannot be purchased from anywhere else. Shipping and processing charges are not listed. Please note that LifePlus offers significant discounts to partners.

There are no reviews for EPA Plus posted online. The daily dose is 3 capsules taken with meals. Special precautions are issued by the manufacturer for certain categories of patients, such as pregnant and nursing women.

Omega-3 fatty acids EPA and DHA are considered essential because the body is unable to naturally produce them and instead they have to be obtained from food sources. However, the poor dieting habits of the modern men and women, plus an erratic lifestyle often lead to Omega-3 shortages, which is why supplementation is frequently recommended. The multiple benefits of Omega 3 make it a potential powerful weapon against a number of cardiovascular, eye, liver and neurological diseases. Although a 3g per day dosage is usually accepted, a daily dosage is not yet established. EPA Plus offers 140 mg per capsule of EPA and 100 mg DHA per capsule. The formula’s effectiveness is not supported by the manufacturer, nor are there consumer testimonials that we can analyze. It is however safe to assume that EPA Plus may generally work and achieve its purpose. The manufacturer mentions a number of precautions, which should be considered before use.

There are no direct consumer reviews available which makes it hard for us to assess EPA Plus’s effectiveness. Given that most doctors recommend that a fatty acids daily intake is not clearly established, we advise you start treatment at the recommendation of a healthcare provider. 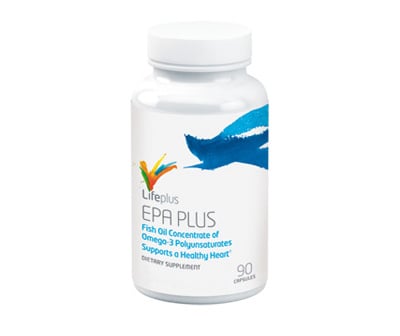 clear
Q:
What are the EPA Plus ingredients?
A:

Q:
Can EPA Plus improve cognitive health?
A:

Omega-3 fatty acids are known to have many positive qualities and help the human body in various ways. Most people do not get adequate amounts from their diet alone, so considering EPA Plus provides these marine lipids, it may be an effective supplement. Customers also seem to be pleased with the results.

However, similar products are available on the market. We advise our readers to investigate each formula further before making a purchase.