Mind & Memory Matrix is one of the numerous dietary supplements that claim to enhance memory, clarity and focus, while fighting anxiety and boosting brain and cognitive activity on the overall. And, like many of the other similar formulation, it too fails to bring actual evidence that support its benefits. Instead, its advertised benefits seem to result from the benefits of its individual ingredients, or so are consumers lead to believe. Ginkgo Biloba, St. John’s Wort, Bacopa Monnieri, Phosphatidylserine, Vinpocetine, Huperzine A, are only some of the ingredients commonly linked to brain activity boosting benefits.

The manufacturing company is Nature’s Design, a U.S. based company that offers numerous other dietary supplements for a variety of ailments, including heart problems and weight issues. For some reason which is not made public this exact formula is not included on the official website, nor is there information that it was or it is going to be disclosed. Additionally, it is available for purchase on some of the largest online retail websites.

Mind & Memory Matrix is designed to help adults with the age over 18 to achieve superior cognitive performance, and cope with the everyday stress.

The supplement features a number of very popular herbal extracts, including Ginkgo Biloba, St. John’s Wort, and Bacopa Monnieri. Each has its own unique set of benefits and mechanism of action. For instance St. John’s Wort is known to help alleviate symptoms of various nervous system disorders. It seems that one of its active substances called hyperforin plays a large role in depression by acting on chemical messengers in the nervous system that regulate mood. St. John’s Wort is also used for PMS and menopause symptoms, skin problems, and digestive upset. On the other hand, the herb appears to interact with blood thinning medication, and drugs aimed at high blood pressure, depression, HIV, allergies, and cough, as well as with immune system drugs.

Another set of ingredients included in the formula are non-herbal, such as DMAE (dimethylaminoethanol), a compound naturally produced by the human brain, although not always in optimal quantities. DMAE has an antioxidant effect, as well as the ability to act as a precursor for Choline, which is the precursor of the neurotransmitter Acetylcholine.

Being an antioxidant, DMAE is able to minimize the damaging effects of free radicals, which is why it is popular as a skin care formula, and is advertised as an aged skin rejuvenation agent – it can reduce wrinkles, age spots, and other aging signs.

DMAE has a much more important role as a precursor to Acetylcholine, which is known to be essential memory, learning, attention, and sleep processes. Supporters of DMAE claim it is able to decrease anxiety levels, and boost energy as well as to enhance memory and intellectual capacity altogether. Research is evidently needed to support many of these claims.

Side effects of DMAE are rare and include muscle tension, insomnia, and headaches.

Some of the ingredients found in Mind & Memory Matrix are also available in nootropics like NeuroFuse.

Mind & Memory Matrix lists Ginkgo Biloba as its first ingredient, particularly the supplement features 50 mg of Ginkgo 24% extract from leaf per serving (1 capsule). Ginkgo is an herb which has been traditionally consumed as food in China since ancient times, being valued for its numerous nutritional qualities. Today, extracts from this plant are featured in products that may help with symptoms of Alzheimer’s disease, cognitive and memory impairment, or other forms of dementia, focus and concentration problems, macular degeneration, glaucoma, intermittent claudication and others.

The active substances found in this ingredient work as antioxidants and therefore improve the neuronal connection. Standardized extracts are preferable to non-standardized one, since the former have been used in most clinical trials existing at the time. Standardized extracts contain 24 to 32% flavone glycosides (flavonoids or heterosides) and between 6% and 12% triterpene lactones (terpenoids). It is not clear whether this supplement features a standardized extract of Ginkgo or not.
Precautions refer to people that are about to undergo surgery, people suffering from seizures, pregnant and breastfeeding women, people with diabetes and other categories. Side effects are rare and may include stomach upset, skin reactions, headaches, and dizziness.

Phosphatidylserine, another essential ingredient of the supplement, may work to enable brain cells in metabolizing glucose and improving the release of key neurotransmitters so that memory and other cognitive processes are optimized. Studies so far are in their initial stages, but evidence is encouraging.

Mind & Memory Matrix comes with a rather long list of cautionary advice; therefore it would be advised that you talk to your healthcare provider before starting treatment. Particularly, people trying to conceive, those already at risk of bleeding, people taking anticoagulants or seizure medication should especially be careful when considering taking this formula.

6) How Much Does Mind & Memory Matrix Cost?

The supplement is sold online through various platforms, including Amazon.com. Each bottle contains 30 pills. The daily recommended dose is 1 capsule take 1 to 2 times per day; hence a bottle may last for maximum 30 days of use.

The list price on Amazon for instance is $80, but the formula currently sells for less than $18 – that is a price reduction of roughly 78%. This is an excellent deal, especially since he formula benefits from a 100% money back guarantee.

Mind & Memory Matrix should be taken with caution by people suffering from a preexisting condition, including but not limited to seizures, blood clotting issues, pregnant and nursing women or people trying to conceive.

It is clear for everyone that there is no one solution fits all available for any health condition out there, dare we say. Treatment plans usually take into account patient particularities, such as health history and background, current state of health, severity of the condition being treated, other medication he/she might be on, etc.

Mind & Memory Matrix is similar to other formulas available on the market in that it combines various ingredients (herbal & non-herbal) in the attempt to offer its benefits to as many people as possible. Reviews from consumers are generally positive, although complaints also exist. Luckily, the formula is covered by a 100% money back guarantee, but be aware that it is a very restricting one: it offers a 30-day full refund (less shipping and handling), and the item must be unused, in the same condition it was received and in the original packaging. 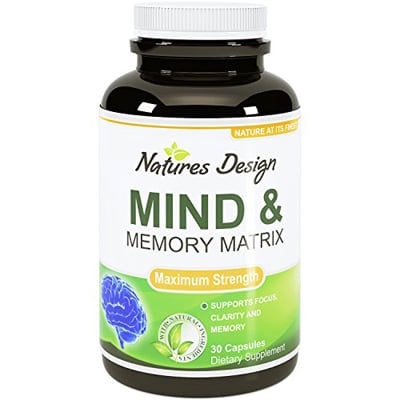 Q:
What is Mind & Memory Matrix supplement?
A:

The manufacturing company is Nature's Design, a U.S. based company which delivers a wide range of dietary supplements produced in facilities that follow the provisions of the Current Good Manufacturing Practices (CGMP).

Q:
Are Mind & Memory Matrix benefits actually a reality?
A:

As with any dietary supplement, the answer to question of whether the formula works depends on certain factors, of which some are not in our control. Each patient is different, that is for sure, and each may react differently to the same formula. More than 65% from all Amazon customer reviews rate this as a 5-star formula, praising its beneficial effects in terms of boosting focus and concentration, helping with learning and memory processes, fighting away stressful feelings, or optimizing the thinking and decision making process. Nonetheless, we have reasons to believe that for some people it may not work that great.

The fact that the formula is not presented as part of the company's product portfolio on the official website is a red flag, although our investigation could not reveal the reasons why this happens or whether the formula is discontinued at the time of the review.