NeuroFuse Review – 11 Things You Should Know Before You Buy

0 User Comments | 5 Answered Questions
Evidence Based This BrainReference content is medically reviewed or fact checked to ensure factually accurate information. Click for more info. | Summary | Ingredients | Health Benefits | Is it Safe? | Warnings | Cost | How To Take | Does it Work | Comparisons to NeuroFuse | Q&A

Do you require extra brainpower to cope with the fast-paced life of today? Trying a nootropic supplement might help.

NeuroFuse is a dietary supplement including a blend of natural nootropics designed to improve memory, mental performance, concentration, and clarity. It has been manufactured by two roommates of Harvard University who aimed to help all those lagging in the race of life. With the 13 different ingredients that claim to improve mood while improving everyday efficiency, this supplement has been quite popular since its launch back in 2015.

But is NeuroFuse able to deliver what it promises? Here is a comprehensive product review to help you find answers.

Labeled as an “elite neuro enhancer,” NeuroFuse is a nootropic supplement that has been on the market since 2015. Created by two students of Harvard as an attempt to compete well in one of the most prestigious universities in the world, it has since been on the market as an affordable supplement for brain health with a solid fanbase. While some argue that its popularity and customer pool have been dwindling due to a lack of formula updates and enhancements, many still swear by its positive effects on focus, clarity, energy, and alertness.

With ingredients like Bacopa Monnieri, Huperzine A, and Vinpocetine, NeuroFuse claims to boost mental performance, making it easier to cope with daily stressors and deadlines. It is available in sleek, black bottles, each with 60 oral capsules. What makes it different from its competitors is the added bonus of tackling mental as well as physical fatigue. The company promises that it can significantly reduce the symptoms of stress in as little as three days and start working on the positive symptoms within four weeks.

NeuroFuse is manufactured by a company of the same name – NeuroFuse LLC. It was established by two Harvard roommates as an attempt to facilitate people who are always busy in life and need consistent efficiency and brainpower. The company operates from New Castle, Delaware, and does not have an official platform online. No additional information is available about the manufacturer or the company.

3) Details on NeuroFuse Ingredients and Uses

The ingredients label for NeuroFuse mentions the following ingredients:

4) Is NeuroFuse Right for You?

According to the makers of NeuroFuse, the supplement is suitable for anyone who wishes to boost their mental performance, clarity, and focus. This may include:

Consistent use of the NeuroFuse pills claims to provide the following benefits to the users:

The makers have advertised NeuroFuse as a natural supplement formulated using plant-based extracts only. It is claimed to be free of chemicals, fillers, toxins, or stimulants and comes with a GMP-certified seal.

Nevertheless, certain ingredients added to NeuroFuse may trigger side effects in some individuals. These side effects, although rare, may include nausea, vomiting, stomach upset, insomnia, headaches, dizziness, and a slow resting heart rate.

Unfortunately, there is no official website dedicated to the distribution of NeuroFuse. You can find it on other platforms like Amazon, Walmart, and eBay.

9) How Much Does NeuroFuse Cost?

The cost for NeuroFuse may vary from one platform to another. It is currently available at Walmart for $20.95 per bottle, each containing 60 capsules.

The daily dose for NeuroFuse is two capsules daily at any time during the day, with or without food. The best way to take it is with food as it helps increase the absorption of its ingredients. Because the supplement contains caffeine, it is advised to consume it before 3 pm to prevent it from disturbing your sleep.

The best time is to take the pills with water early in the morning so that the effects of NeuroFuse can be felt throughout the day. You can start with one pill per day to assess your tolerance before increasing the dose within a few days.

NeuroFuse is a dietary supplement formulated to help people from all walks of life get clean mental energy and clarity. Each pill features a proprietary blend of various science-backed natural nootropics to support its claims. The price is extremely affordable and the customer reviews are positive, indicating its potential to deliver what it promises. The only drawback is the absence of the official website and a lack of information regarding its manufacturers which may raise doubts in minds. 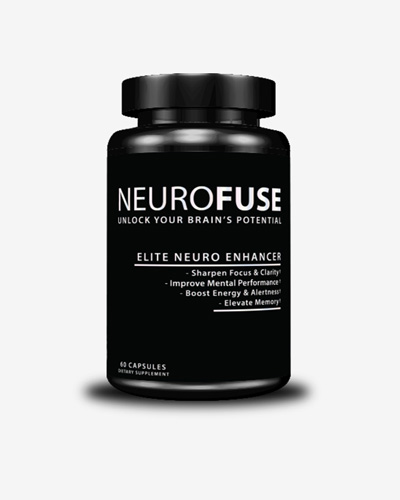 clear
Q:
What is NeuroFuse supplement?
A:

NeuroFuse is a high-end nootropic formula designed to provide users with laser-sharp clarity, mental alertness, and physical energy with the ingestion of 1-2 capsules per day. Marketed as "an elite cognitive enhancer" and based on clinically studied ingredients, the formula should help sharpen focus and mental clarity, improve mental performance, boost energy and alertness, reduce perceived stress and anxiety, and elevate memory.

Q:
How can NeuroFuse help me improve my cognitive health?
A:

According to the manufacturers, the ingredients added to NeuroFuse protect the brain tissue from free radicals while improving its working and overall health.

Q:
Does NeuroFuse work?
A:

Neurofuse uses some well-respected nootropic ingredients that have been demonstrated to improve cognitive, focus, memory, and learning. The formula may work because of these ingredients but because most of the core ingredients are hidden behind a "proprietary blend", one can't say for certain how much of each ingredient is actually in there.

Q:
How should I take NeuroFuse
A:

The best way to consume NeuroFuse is to take 1-2 pills per day preferably with breakfast. Avoid taking it after 3 pm as it may interfere with sleep if taken close to bedtime.

Q:
Can I return NeuroFuse?
A:

Unfortunately, NeuroFuse does not have an official website; hence, returns are not possible.