L-Glutathione Review – 8 Things To Look For

L-Glutathione features as core active ingredients the molecule Glutathione, an amino acid stored in the liver. The formula is manufactured by Healthy Origins and is claimed to contain a brand of L-Glutathione called Setria, produced exclusively in Japan through a proprietary fermentation process. The formula hence is claimed to contain highest quality available Glutathione, although no evidence is provided to support this claim.

The manufacturer offers little information on the formula’s main benefits and ailment claims. The amino acid Glutathione has however been linked to potential benefits for the immune system, neurological and cognitive function, aging processes, cellular detoxification, etc.

Healthy Origins produces and markets a number of condition specific formula, tailored to assist with the particular needs of women and men, as well as for various ailments and health conditions that might impair the cognitive function, bone system, digestive system, cardiovascular function and other vital body systems and functions.

L-Glutathione contains a single active ingredient, the amino-acid L-Glutathione, considered one of the body’s most important defense mechanisms against oxidative stress which leads to numerous ailments.
The amino-acid is produced by the liver, however after the age of 20, Glutathione levels decrease by 10-12% per decade making supplementation absolutely necessary.The antioxidant properties of this amino-acid are particularly important for the brain and neurological function, since brain generates an amount of oxidative by-products/gram of tissue larger than any other organ in the body. Most common uses, some of which have been investigates scientifically, include stroke, ischemia, Parkinson’s disease, Alzheimer’s, Down syndrome, sleep problems, toxicity of heavy metals, multiple sclerosis, lack of physical energy, inability to focus, etc.

3) What Does L-Glutathione Do?

Many of its medical activities are still to be researched and proven through actual clinical trials. Side effects are rare and may include gastrointestinal discomfort, bronchial constriction, and allergies.

The recommended daily dosage is one capsule. There are testimonials posted online about L-Glutathione:

5) What You Need to Know Before Taking L-Glutathione

The formula is available in 60 and 150 capsules bottles. A bottle of 60 capsules has a retail price of approximately $50, making a month’s supply cost roughly $25. However, most online retailers offer an up to 50% discount, and you may often find the 60 capsules bottle selling for approximately $22. The formula can also be purchased from the manufacturer’s website and numerous other online retailers and stores.

7) How to Take L-Glutathione

The optimum recommended dosage is one capsule per day. No side effects are mentioned for L-Glutathione; although L-Glutathione may cause allergies, pr gastrointestinal problems. There are numerous consumer testimonials available online, most of which claim the formula helps with energy levels (mental and physical), detoxification, immunity system, and ultimately overall health.

L-Glutathione is an important antioxidant which fights oxidative stress damage. Levels of this amino-acid significantly decrease with age, hence it is essential to normal aging and prevention of diseases that might be cause by free radicals. L-Glutathione may be considered a safe and effective product, as numerous consumer reviews seem to claim. The formula is also advertised to be pharmaceutical grade and to contain the highest quality Glutathione (synthesized in Japan under a proprietary fermentation process). 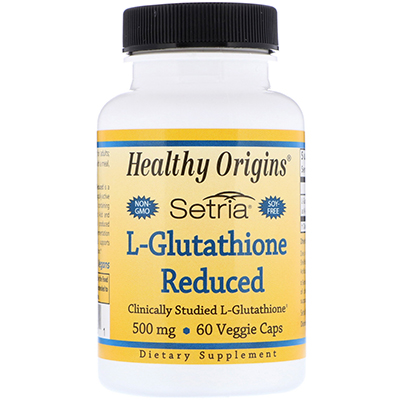 clear
Q:
What are the active ingrediens in L-Glutathione?
A:

Q:
What is L-Glutathione?
A:

L-Glutathione contains the amino acid L-Glutathione, an important antioxidant which helps fight oxidative stress that is the root cause of numerous illnesses. The manufacturing company Healthy Origins makes no ailment or benefit claims, however L-Glutathione has been used for treating or preventing Alzheimer's disease, Parkinson's, stroke, improving sleep and mental focus, enhancing the immune system, boosting energy, cellular detoxification and many others. While many of these claims are yet to be scientifically demonstrated, L-Glutathione has generally received positive consumer reviews and may be considered fairly effective.

Q:
Does L-Glutathione work?
A:

L-Glutathione appears to be a fairly effective formulation, if we consider the positive consumer reviews it has received and the extensive research available on the main ingredients, L-Glutathione. Additionally, the manufacturer enjoys a good reputation as a high-quality manufacturer; hence you should be getting your money's worth when buying this formula. Still, you should remember this is a dietary supplement and that there are no regulations for safety or quality which it must comply with. For cautionary reasons, it is advised you consult a specialist.

I found that Healthy Origins L-Glutathione gives me immediate energy and also supports my stamina for the whole day. I mean both my physical and mental energy. The price is a bit high but I am convinced it is worth it!

How long after taking the supplement before you noticed any improvement?

I attribute my improved mental alertness and memory cognitive to L-glutathione. I have also noticed that I have more energy and I get better rest.