Carlson Laboratories Acetyl L-Carnitine Powder is a nutritional supplement designed to support memory and concentration. Carlson Labs is the manufacturer of the formula, which makes it available in both powder and capsules forms. The manufacturer argues that the benefits of free form amino acids such as Acetyl L-Carnitine far exceed those of supplementation with proteins directly.

Carlson Laboratories was founded in 1965 and activated in the nutritional health supplement sector. The company product range has expanded through the years to meet the nutritional needs of the customers. Today, the product lines include award-winning Norwegian fish oils, a full line of vitamins (including the most complete line of natural vitamin E products in the world), minerals, amino acids, special formulations and nutritional supplements.

Carlson Laboratories Acetyl L-Carnitine Powder is for adult use only, except pregnant or lactating women.

Acetyl L-Carnitine is an amino acid. It is one of several forms of Carnitine found in the body, compounds naturally produced and regulated by the kidneys.One of the main functions of Acetyl-L-Carnitine is to transport fatty acids to the mitochondria (known as the power plant of the cell) thus facilitating fat to be used as fuel in the energy production processes.

The brain protective action of Acetyl L-Carnitine is accounted for by the fact that all Carnitines are antioxidants, meaning they counteract the damaging effects of free radicals. Additionally, the acetyl group attached to L-Carnitine is involved in the production of the key neurotransmitter Acetylcholine, essential to learning and memory processes. Research is now conducted to determine if Acetyl-L-Carnitine can assist with disorders such as depression, ADHD and Alzheimer’s disease.

2) What Are Acetyl L-Carnitine Powder Ingredients?

3) Is Acetyl L-Carnitine Powder Right for You?

The human body produces acetyl l-carnitine in the liver and kidneys and stores it in the heart, brain, sperm and also in the skeletal muscles. Usually, it is produced in the right amounts your body needs, however, some individuals experiment troubles in producing it, thus trying to acquire it from other places like dietary supplements or other more powerful medications.

Also, acetyl l-carnitine is an antioxidant. Antioxidants assist the body rid itself or suppress the release of free radicals. Free radicals are harmful particles in the body known as their malicious effect upon the human cells or for the damage they cause when tampering with DNA.

Other studies made on acetyl l-carnitine found it to be useful when dealing with problems as hyperthyroidism, Peyronie’s disease, erectile dysfunction, male infertility, kidney disease and dialysis, weight loss, exercise performance, diabetic neuropathy and peripheral vascular disease. However, its ability to help with these issues has not yet been proven.

Acetyl l-carnitine by Carlson Labs is a dietary supplement found in bottles containing 120 capsules designed to last up to 4 months if the recommended daily dosage is not exceeded. This product is available for purchase directly on the manufacturer’s website or from various other online retailers and can be bought at a rather affordable price.

The suggested dose is half a teaspoon dissolved in water. No side effects are mentioned although stomach upset, nausea, vomiting, restlessness and a “fishy” odor of the urine, breath and sweat have sometimes been reported.

Carlson Laboratories Acetyl L-Carnitine Powder is a source of Acetyl L-Carnitine, an important amino acid with multiple health benefits. Although many of these benefit claims are still under research and clear evidence is still required. Regarding the formulas specific memory and concentration enhancement benefit claims, there is some evidence to support the fact that Acetyl L-Carnitine has neuro protective and cognitive enhancing properties. While we could not find any product reviews, we may say the product is likely to work for some consumers.

The manufacturer doesn’t mention any interactions with other medicine or categories of patients who should avoid use, although clinical tests on Acetyl-L-Carnitine have indentified potential side effects. Pregnant and nursing women are advised not use the formula. 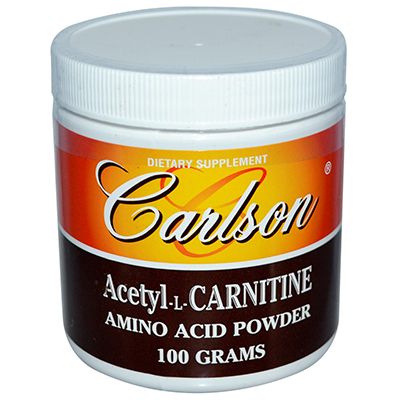 Q:
Acetyl L-Carnitine Powder is all about what?
A:

Although the product is described as helpful in various conditions, especially when dealing with fatigue or memory impairments, studies have shown it to be ineffective. Acetyl L-Carnitine deficiency can lead to various issues, and it might be useful when taken after a recommendation from a specialist or a medical doctor.

I used some other similar products and since I started on Acetyl L-Carnitine 500 and I noticed some slight improvements.

Acetyl L-Carnitine 500 really helped me with my carnitine deficiency. I am very happy with this product.