SAN ALCAR Acetyl L Carnitine is marketed as a highly bio-available form of L-Carnitine designed to help to maintain healthy cellular energy metabolism and to support brain function.The formula is manufactured by SAN a company specialized in sports nutrition for athletes designed to decrease body fat, improve athletic performance or increase muscle mass. The company was established in 1996. The manufacturer claims it operates a GMP certified and FDA registered manufacturing facilities and that it is one of the most trusted companies in the industry. All company products can be returned within a 30 days’ time-frame.

The manufacturer claims the formula provides pharmaceutical grade Acetyl L Carnitine which surpasses ordinary L Carnitine, although it brings no argument to support these claims. SAN ALCAR Acetyl L Carnitine is recommended to sports enthusiasts as it supports physical energy and to people who seek for enhanced cognitive function.

1) Acetyl L Carnitine at a Glance

SAN ALCAR Acetyl L Carnitine is a modified form of L Carnitine, an amino acid whose main function is to carry fatty acids into the mitochondria of cells where they are converted to energy. High concentrations of L Carnitine can be found in the heart, which requires large amounts of fatty acids and energy to pump the blood throughout the body.

The main brain and neuroprotective health benefits of Acetyl L Carnitine (ALCAR) account to its participation in the biosynthesis of the neurotransmitter Acetylcholine. Acetylcholine is known to stimulate short-term memory, attention and promotes REM sleep. This is why numerous researched was concentrated on establishing Acetyl L Carnitine’s role in relieving Alzheimer’s symptoms. Additionally, ALCAR may alleviate symptoms of mood disorders such as depression, and Chronic Fatigue Syndrome (CFS). ALCAR levels decrease with age, hence there is reason to believe that supplementation may be able to prevent old age memory loss and other cognitive impairment conditions. Side effects reported are mild and include nausea, abdominal cramps, and diarrhea. Large doses can cause a “fishy” body odor.

3) What Acetyl L Carnitine Does?

SAN ALCAR Acetyl L Carnitine is an average priced product. It can be purchased either from official manufacturer website or other online or offline retailers. When the purchase is made in larger quantities, discounts or promotions are usually offered. However, international shipment is only provided by some of the retailers. There is also a 30-days money back guarantee for customers who are not satisfied with their pick. A bottle contains one hundred supplements and is sufficient for twenty-five days of treatment if the label dosages are correctly followed.

6) How to Take Acetyl L Carnitine

Acetyl L Carnitine enjoys increased popularity among sports enthusiasts such as athletes or weight lifters. The generally use supplementation based on ALCAR pre or post workout, in order to increase physical energy and muscle mass. However, research reveals that the amino-acid also possesses numerous benefits on the brain, supporting functions such as short-term memory or alertness.

SAN ALCAR Acetyl L Carnitine is one of the many formulas which feature ALCAR as main ingredient. Consumer reviews report increased satisfaction with the formulation, which leads to the conclusion that the product will work at least for some consumers.We do recommend caution and advise you talk to a physician prior to using the formula, since mild side effects have sometimes been reported. 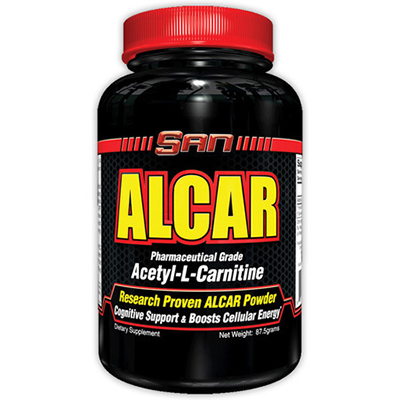 clear
Q:
What does Acetyl L Carnitine contain?
A:

Q:
Acetyl L Carnitine is all about what?
A:

SAN ALCAR Acetyl L Carnitine is advertised as a highly bio-available formulation based on the effects of L-Carnitine that focuses on brain function, cellular and metabolism improvement. The manufacturer of this supplement is called SAN and over the past decade has focused on delivering products that enhance athletic performances by increasing muscle mass. They claim that this formula offers pharmaceutical grade L-Carnitine that surpasses ordinary L-Carnitine when it comes to its beneficial effects. It is recommended for people seeking to improve physical energy.

In the past decade, Acetyl L-Carnitine has enjoyed an increase in popularity on the nutritional market because it is directly related to muscle development, thus being a good choice for weight lifters and athletes. It is generally taken both before and after the exercises. In order to determine an increase in muscle mass and physical energy, people also require a healthy diet and a normal sleep schedule in addition to supplementation.

Client testimonials mostly reveal the effectiveness of the product, but only in combination with a better lifestyle, not by itself. However, more research is needed in order to determine the general efficacy of the supplement. The formula may also prove its beneficial qualities regarding the enhancement of some areas of the cognitive system. Thus it may have a positive impact on Alzheimer's, dementia, or ADHD symptom treatment.

I’ve tried a lot of supplements, but I’m satisfied with this one in particular. It helped me with my headaches and improved my sleep. Totally recommend it.

I’ve recently joined the gym and at first it was difficult for me to adapt to these new changes. That’s why I wanted to try some natural supplements that may help me. Well, I have to say that this one really works. I just don’t feel so tired anymore after the exercises.