Acetyl L-Carnitine and Alpha Lipoic Acid is a dietary supplement designed for the support of several metabolic functions known to decline with age. It is claimed to help with antioxidant processes, circulation problems, cognitive and nervous system issues and detoxification.

The developer of the formula is Source Naturals, a pioneer in the industry of nutritional supplements as combinations of herbal and nutraceutical components. The company, founded in 1982 developed several scientific-based awarded formulas, such as Life Force Multiple, Higher Mind and Mega-Kid Multiple.

Acetyl L-Carnitine and Alpha Lipoic Acid contains two active ingredients: the acetylated form of L-Carnitine and the antioxidant alpha-Lipoic Acid. Both substances are known to support the body’s own system for the maintenance of healthy cell function and fight against cell deterioration caused by aging.

Acetyl L-Carnitine is a form of Carnitine naturally produced and regulated by the kidneys. The core function of Acetyl-L-Carnitine, as with all carnitines, is to transport fatty acids to mitochondria, allowing the fat to be used as fuel. The acetyl group attached to L-Carnitine is essential for the production of acetylcholine, a key neurotransmitter. Several studies have shown acetyl-L-carnitine to possess brain protective properties, making it a potentially efficient treatment of certain nervous and cognitive diseases (ADHD, Alzheimer’s and depression).

Alpha Lipoic Acid is an antioxidant soluble in both water and fat, scientifically proven in tests on rats to have positive effects in reversing age-related decline of mitochondria, enhance metabolism and increase fatty acid oxidation.

It is believed that supplements containing both nutrients are more efficient than those containing either one alone.

4) Precautions of Acetyl L-Carnitine and Alpha Lipoic Acid Use

Acetyl L-Carnitine and Alpha Lipoic Acid is sold by bottles of 60 capsules, containing 650 mg. The price of this product is moderate and can even be considered cheap in comparison with similar products. The formula cannot be purchased directly from the manufacturer’s website. However, a complete list of online and offline retailers is available on the official website.

6) How to Use Acetyl L-Carnitine and Alpha Lipoic Acid

Acetyl L-Carnitine and Alpha Lipoic Acid is a supplement advertised as a formula consisting of 2 essential nutrients for the support of vital metabolic functions. The formula’s ingredients have been the subject of several clinical trials which have determined their effectiveness especially in alienating cognitive and nervous diseases. The studies have also revealed that the combination of these nutrients is highly more efficient than supplements containing only one of them.

Acetyl L-Carnitine and Alpha Lipoic Acid has received good reviews from users regarding its effectiveness in helping with mental fatigue, improving focus, improvement of skin aspect and peripheral neuropathy caused by chemotherapy.

However, the manufacturer warns against the use of this supplement without a prior consult of a healthcare professional especially if suffering from certain conditions (such as diabetes or epilepsy). Being an unapproved product by the FDA, getting the healthcare’s consent is also our recommendation. 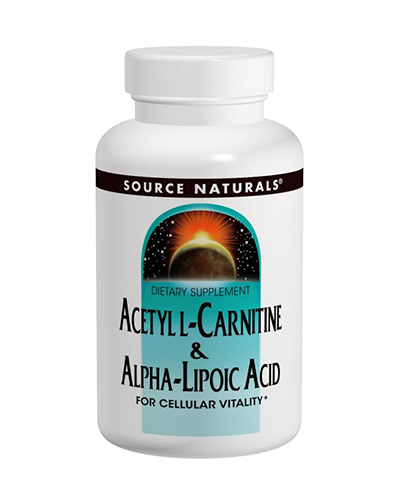 Q:
What is Acetyl L-Carnitine and Alpha Lipoic Acid?
A:

Acetyl L-Carnitine and Alpha Lipoic Acid is an amino-acid based brain supplement produced by Source Naturals. Its advertised purpose is to help people "fight" the natural aging process. The combination of acetyl-l-carnitine and alpha lipoic acid has been shown to help neurons maintain optimal energy levels and rejuvenate aging brains. According to the manufacturer, this powerful blend of amino acids will help fight free radicals, while supporting the nourishment and protection of your mental functions. The suggested use is one tablet, 1-4 times a day.

The combination of Acetyl L-Carnitine and Alpha-Lipoic Acid might prove an affordable and effective solution for people who want to improve their general health, especially cognitive functions and memory.

Although there aren't sufficient studies regarding its effectiveness, the ones that do exist recommends it as an effective product. To obtain proper results, the dosage on the label should not be exceeded, and people suffering from kidney disease should stay away from this supplement.