Acetyl L-Carnitine promotes cognitive support with core benefits including increased mental energy and concentration. The manufacturer, Swanson Health Products, claims the formula contains a unique form of L-Carnitine which provides powerful antioxidant protection throughout the nervous system, which, combined to its ability of passing through the blood-brain barrier ensures optimal brain function.

Swanson Health Products is a company founded in 1969 which currently activates in the nutritional supplements industry. The company continues to expand its selection of diet and weight loss supplements, natural hair and skin products, healthy foods according to modern trends (featuring organic options and green foods) and products for special diets (vegetarian, vegan, gluten-free and kosher).

Acetyl L-Carnitine is designed for adults only.

1) Acetyl L-Carnitine at a Glance

Acetyl L-Carnitine is a single ingredient formula for brain health enhancement which features the ester of the essential amino acid L-carnitine. Each capsule of the formula contains 500 mg of Acetyl L-Carnitine, exactly the recommended dose for a healthy adult (without ill health or obesity issues).

Acetyl L-Carnitine, also known as ALCAR plays a crucial role in cellular metabolism and energy production; particularly it serves to shuttle acetyl groups into the mithocondria. Preliminary studies have shown that Acetyl L Carnitine may facilitate synthesis of acetylcholine, a neurotransmitter involved in sleep regulating cycles and reward system. Also, it its ability to fight depression symptoms is currently investigated.

Side effects are rare and include mild gastrointestinal symptoms (nausea, vomiting and cramps), headache, agitation, restlessness and increase in seizure frequency in persons with seizure disorder.

3) Does Acetyl L-Carnitine Work and it is Safe?

Acetyl L-Carnitine’s formula is based on the essential amino acid L-Carnitine. Acetyl L-Carnitine is broken down in the blood by plasma esterases to carnitine, to transport and metabolize fatty acids for the muscle to use as an energy source. So, in essence, Acetyl L-Carnitine is naturally found in the body and helps produce energy. However, its role does not end there, as studies have shown it to increase fertility in males, treat a variety of mental disorders, memory loss, depression, nerve pain and even alleviate facial paralysis symptoms.

Research so far suggests Acetyl L-Carnitine is not linked to any harmful side-effects, making it safe to use for people of all ages. The manufacturer claims their product is unique, but dietary supplements that contain the amino acid L-carnitine are very common on the market. Regardless, the product’s overall claims seem to be realistic, and it may reach its goal of energizing the mind and body. Athletes and people with fatigue have been using this amino-acid because it promotes cardiovascular function and boosts energy levels. Because it passes through the blood-brain barrier, it is said to support cognitive health and optimal brain function.

Being so widely used and known for its benefits, Acetyl L-Carnitine has had many customers leave their opinions on the manufacturer’s website in the form of reviews. The overwhelming majority of them are positive and give 5 out of 5 overall ratings to the supplement, while the rest seem to suggest its results weren’t too convincing. For further insight, we recommend you check out the reviews. As a dietary supplement, Acetyl L-Carnitine should be taken with water, once or twice a day.

5) Precautions of Acetyl L-Carnitine Use

Acetyl L-Carnitine’s price is inexpensive. For 100 capsules a bottle, a monthly supply is quite affordable. You can place an order on the manufacturer’s website and have the product delivered to you in 48 hours or less. Shipping will only cost your around $5 anywhere in America. Even though no free trial of the product is offered, Swanson Health Products’ money-back guarantee seems to be the most convincing one on the market. They are willing to refund the customer for 100% of their money, within one full year from the purchase date, including shipping and handling on domestic orders.

Consumer reviews are positive, with important benefits mentioned by consumers including mental energy, better memory and increased focus. No potential side effects, drug interactions or other warnings are issued by the manufacturer. The recommended daily dosage is 1 capsule taken 1-2 times a day.

Acetyl L-Carnitine is based on a popular memory enhancer ingredient, Acetyl L-Carnitine. Extensive research exists on the ingredients, which prove its memory enhancing properties, although some benefit areas are still under debate.The product is likely to deliver on the benefit claims set out by the manufacturer, a fact confirmed by numerous consumer testimonials which report increased effectiveness.

The formula offered by Swanson Health Products has little differences from similar products featuring Acetyl-L-carnitine, therefore we cannot say if there are better products out there.

It is however our recommendation to reach out to a healthcare provider or pharmacist for specialized advice before use. 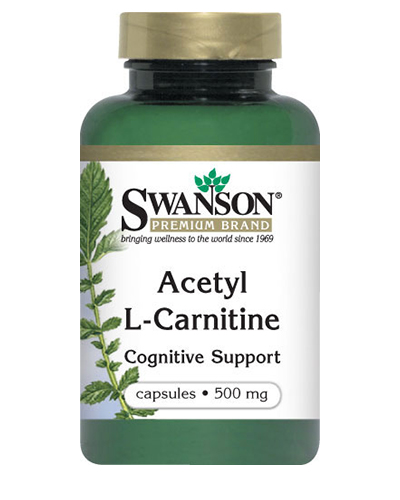 clear
Q:
What are the active ingrediens in Acetyl L-Carnitine?
A:

Q:
What is Acetyl L-Carnitine supplement?
A:

Swanson's Acetyl-L-Carnitine is advertised to be a formula that aims to support general brain health. The manufacturer of this product is called Swanson Health Products and is situated in North Dakota, United States. Swanson's Acetyl-L-Carnitine is designed around the essential amino acid L-Carnitine, that plays a crucial role in energy production, thus sustaining the needed energy levels of the brain and offering stress relief, another effect of L-Carnitine is the increase in attention and memory, as well as the protection against attention disorders or learning and memory disorders.

Q:
Are Acetyl L-Carnitine benefits actually a reality?
A:

Acetyl L-Carnitine is one of those products that sounds too good to be true. Not only is it considerably cheaper than most similar products, but with a convincing money-back guarantee and a quality manufacturer, it looks to be a great overall dietary supplement. However, The manufacturer only manages to list out some ways the amino acid L-Carnitine could potentially benefit a user, instead of providing concrete evidence to support their product's claims. On the other hand, for those struggling with focusing, concentrating and remembering important information in their lives, there will always be supplements like Acetyl L-Carnitine.

I am not shore if it’s just me, but this is the best memory formula I have ever used, it has almost immediate effect.