Kava Kava Root features an extract of the Kava Kava herb and is advertised to promote emotional well-being, muscular and nerve relaxation and offer support from tension associated to everyday stress.The formula is manufactured by a reputable U.S based company called Gaia Herbs. The company manufactures and markets a wide spectrum of herbal supplements and claims to use organically grown herbs. Gaia Herbs owns its own plant farm and operates a comprehensive website which offers complete details on company principles and products (including label information).

Given that Kava Kava has been associated with potentially serious safety issues, the producer advises consumers to use the formula for a maximum 1 month period. Additionally, the formula should not be used by certain categories of patients such as pregnant and nursing women, people drinking alcohol, those who suffer from liver conditions, or are already under treatment.

1) Kava Kava Root at a Glance

Kava Kava Root is a liquid formulation base on a single active ingredient, the Kava Kava plant.The plant native to the Pacific Islands has been traditionally used as a ritual ceremonial relaxant. Today, together with St John’s Wort, it is one of the most popular and used anti-anxiety herbal remedies. Additional benefits include ailments such as ADHD, especially in children, where its tranquilizing effects are used to address the hyperactivity component of this ailment. The herb may also assist with relieving menstrual cramps and other PMS related symptoms due to its analgesic effects.

There are numerous reports of it being effectively used against generalized anxiety disorder, depression symptoms, headaches and insomnia. Kava Kava however enjoys a bad name, due to several case reports of patients in Germany and Switzerland who after using the herb suffered serious liver problems. The plant was declares unsafe; however an exact connection between the condition and Kava Kava has not been established.

The manufacturer warns against the use of the formula for certain categories of people, and advises that if Kava Kava Root side effects consisting of liver problems (brown urine and jaundice) or any other symptoms occur (nausea, vomiting, unexplained tiredness, weakness, light-colored stools, stomach or abdominal pain, and loss of appetite), a healthcare provider is consulted.

Kava Kava Root contains a single herbal extract of the Kava Kava root. Kava Kava is known for numerous health benefits and has been used successfully for thousands of years. Some of its most popular uses include muscle relaxation, soothing anxiety related symptoms and tension, and promoting overall emotional balance. Additionally, evidence indicates it may benefit migraine headaches, hyperactivity in children such as Attention Deficit Hyperactivity Disorder (ADHD), insomnia and aids in the treatment of depression.

Additionally, Kava Kava seems to have analgesic and anti-inflammatory effects on the urinary system, especially for women. It can relax the uterus and may help alleviate symptoms of PMS. Safety concerns exist as the plant has been associated as a potential cause of some serious liver problems in 30 patients from Germany and Switzerland. However, reports did not clearly conclude that Kava Kava caused liver damage and did not rule out potential factors such as alcohol abuse, other medication treatment or other underlying conditions.

For optimum results, the manufacturer recommends taking 20-30 drops of extract in a small amount of water three times a day, preferably between meals.

5) Precautions of Kava Kava Root Use

Kava Kava Root is a liquid formulation available in bottles of 1, 2, 8, and 16 oz volume formats. A 1 oz bottle should last for approximately ten days. A month’s supply costs roughly $45, a price similar to other liquid formulations based on Kava Kava. However, more often than not price discounts or promotional packs are available with various retailers, and so you may purchase the formula at a lower unit price.

7) How to Take Kava Kava Root

A dose of 20-30 drops of extract taken with water 3 times a day is recommended. There are no Kava Kava Root consumer reviews posted online.

Kava Kava is one of the most popular herbal ingredients used to relieve stress, despite the negative publicity it has received after certain cases linking it to serious liver problems have emerged in Europe. Many have dismissed it declaring it dangerous and unsafe; however there is a large amount of research which shows it has beneficial properties as well. Kava Kava Root has not been reviewed and so it is difficult to assess its effectiveness. However, we believe that if used as directed and under the conditions mentioned by the manufacturer, there is a high probability it will achieve the advertised results. 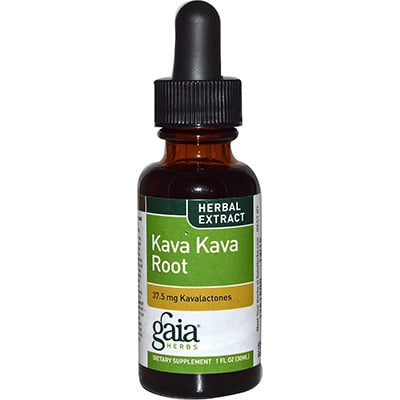 clear
Q:
What does Kava Kava Root contain?
A:

Q:
What is Kava Kava Root supplement?
A:

The herbal supplement Kava Kava Root is advertised to promote muscle and nerve relaxation, alleviate occasional stress symptoms and encourage a general sense of well-being. The formula manufactured by Gaia Herbs features the active ingredient Kava Kava, an herb which may potentially benefit anxiety disorders, ADHD, PMS, headaches, depression symptoms and other conditions. There are concerns that the herb may cause liver damage and other side effects, so you must consult a physician as soon as symptoms occur. Kava Kava Root should not be used for more than one month.

Q:
Are Kava Kava Root benefits actually a reality?
A:

Kava Kava Root is a liquid formulation advertised to help relax muscles and the mind, relieving stress symptoms. Kava Kava is a controversial herb, with several European countries having banned it after case reports of it potentially causing severe liver damage emerged. However, the reports only concluded that Kava Kava might potentially be the cause of such damage, but did not rule out other potential causes. The plant has however proven some significant health benefits and if used cautiously could potentially help many conditions. Unfortunately, there are no consumer reviews online for the formula to conclude if it is effective or not, but there is the reason to believe it will.

I’ve read some negative things about kava Kava, but this supplement was recommended by a friend who was on it and was doing great. Worked for me too. I feel calmer and more confident in my own strength under stressful situations.

This had a very subtle and positive effect on my mood. I used to get these semi-anxious episodes out of nowhere. While using Kava Kava root, I noticed I stopped having them and they didn’t appear for a long time after I stopped. I take this occasionally.