Ginkgo Biloba Extract 120 mg is based on a standardized extract of the plant Ginkgo Biloba, advertised to promote healthy circulation, blood pressure, brain function and memory, and least but not last, healthy vision.
The formula is sold under Stop Aging Now’s brand by the manufacturer with the same name. The company has gained an international reputation during its 20 years of activity in the healthcare industry. This global reputation is the result of the company’s dedication to complying with the strictest quality standards, the latest technologies, and scientific break-troughs while maintaining competitive prices. Today, Stop Aging Now sells dozens of nutritional supplements that address a large palette of health concerns such as the brain, heart, joints, digestive system, and multi-vitamin support to name only a few.

Ginkgo Biloba Extract 120 mg features a 50:1 extract standardized to a minimum of 24% ginkgoflavone glycosides and 6% terpene lactones. One of the highlights of the formula are the inclusion of Ginkgolide B considered one of the most important active chemical in Ginkgo.
Other active substances have been added to maximize the antioxidant and tonic benefits of the formula. These include the Gotu Kola leaf extract and the Eleuthero root extract. The supplement is manufactured on the US territory in an FDA-inspected facility under current standards of quality, purity, and safety.
The formula is only recommended to generally healthy adults who are not currently under anti-coagulant or MAO inhibitory medication.

Ginkgo Biloba is one of the most popular herbal remedies at the moment: prescribed as a stand-alone or alternative treatment in numerous health conditions that affect the heart, brain, and eyes. Its intense use is generally owed to the powerful antioxidants found in the plant’s seeds and leaves, substances that have been clinically show to support overall health by preventing aging of fundamental organs such is the brain. Other important qualities of Ginkgo are the blood-thinning effects which make the herb an ideal remedy for those known to have blood clotting conditions, poor circulation to the extremities, or high blood pressure. The main benefit that results from these qualities is an increase in oxygen levels transported through the blood to the brain (and other extremities) which may further positively influence brain function and brain cell communication.

Gotu Kola is another common ingredient of brain supplements included particularly for its mood enhancing and rejuvenating effects. The herb is also used to alleviate the symptoms of heart failure, high blood pressure, memory impairment or premature aging. The memory enhancing benefits of the herb seem to be supported by several animal and human clinical studies. However, more evidence is required for formulating a definitive conclusion. Gotu Kola’s side effects may include nausea, itching, stomach discomfort, and liver damage.

Eleuthero is also one of the numerous medicinal herbs used in alternative medicine as a general tonic (and shown through clinical trial to reduce mild to moderate stress induced fatigue), as a treatment for osteoarthritis, and to reduce the levels of cholesterol. Common side effects usually associated with longer use of Eleuthero include insomnia, drowsiness, nervousness, and headaches.

Ginkgo Biloba Extract 120 mg is available in bottles of 90 vegetarian capsules. One bottle provides the necessary amount for three months when used properly. The standard price is very affordable. Incremental discounts are offered for clients who purchase larger doses or chose to subscribe to the Autoship Program available for the formula in two options (3 months 6 months periods). The formula can be ordered by clients from all over the world. However, for international orders shipping taxes start from relatively high values (as high as the price for one bottle. US clients enjoy different advantages, including the possibility of choosing between two shipping services (for faster deliveries). The formula also benefits of a 365 days refund.

Ginkgo Biloba Extract 120 mg is not a clinically proven formula. Its side effects may coincide with those usually reported for the active ingredients.

Ginkgo Biloba Extract 120 mg is an herbal supplement advertised as a superior formula for individuals who are seeking a proper cognitive, cardiovascular and antioxidant support for maintaining the overall sense of well-being. The formula features optimum amounts of active chemicals that were clinically proven effective in providing the main claimed benefits of the formula.

However, Ginkgo Biloba Extract 120 mg itself is not currently included in any scientific study, nor are there many testimonials available for online consulting to support the marketed benefits. There are also some important drug interactions people should be aware of before starting a treatment with Ginkgo Biloba supplements. The main concern is the reaction between blood thinners and the herb, as it may dangerously increase the risk of bleeding when used in combination.

In conclusion, although at first sight the formula seems like effective and of a high-quality, for precautionary reasons it is advisable to ask the healthcare professional’s advice before using Ginkgo Biloba Extract 120 mg. 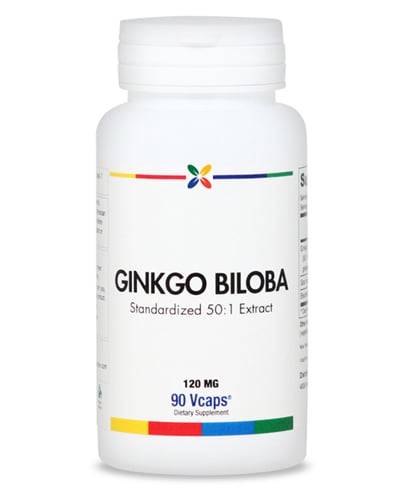 clear
Q:
What does Ginkgo Biloba Extract 120 mg contain?
A:

Q:
What is Ginkgo Biloba Extract 120 mg supplement?
A:

Ginkgo Biloba Extract 120 mg is one of the many brain supplements offered by Stop Aging Now as a multi benefits product including: enhanced overall cognitive function, healthy cardiovascular system, and eyes health support. The formula is sold as a superior formulation that features a 50:1 extract of Ginkgo Biloba standardized to a minimum of 6% terpene lactones and 24% ginkgoflavone glycosides for maximum potency.

The formula is manufactured in a USA inspected facility and is advertised as compliant with the strictest USP and GMP standards for purity, quality, potency, and disintegration. The product also features additional herbal extracts of Gotu Kola and Eleuthero for their antioxidant and cognitive boosting effects. The number of reviews about Ginkgo Biloba Extract 120 mg is limited at the moment of this review. The formula is not itself clinically proven.

Ginkgo Biloba Extract 120 mg is a dietary formula that features one of the most popular active ingredients, clinically researched in a huge number of trials and studies for its antioxidant, brain, and cardiovascular benefits. The main active ingredient here is Ginkgo Biloba, included in the formula in a standardize form for a more stable structure and safer action. However, the formula itself is not clinically researched, nor is there any prospect of a future study designed to include it. More so, the clinical findings about Ginkgo's health benefits are considered to be inconclusive and sometimes contradictory. The potentially harmful drug interactions should also not be ignored.

It is important to known all the aspects of using such a formula before starting a self-administered treatment. Most importantly, it is highly recommended to always ask the opinion of a professional healthcare who can provide accurate and complete information about the potential risks associated with any dietary supplement.

Stop Aging Now’s formula has helped me a lot with my poor circulation. Before using this supplement I always used to have cold feet and hands, no matter how much clothes I wore. But not anymore! And my brain function is noticeably better! Love it.

I love this Ginkgo Biloba supplement because it is really effective in a short period of time. My brain performance has increased considerably since starting to use this product a few months ago. I can see it in my grades, but also in my daily activities that require a higher degree of concentration. I think it is the best brain formula I have tried so far.