Bacopa Complex is an herbal formulation marketed to support several important bodily functions and processes. The manufacturing company Standard Process claims the formula supports normal memory function and physical endurance, enhances mental clarity, nourishes the nervous system and alleviates the effects of temporary and occasional stress. The formula is recommended to adults who wish to support their cognitive and brain activity, while also fighting against common symptoms of occasional stress. The formula should be cautiously used by pregnant and nursing women and only at a physician’s recommendation.

Standard Process is a dietary supplements manufacturer founded in 1929. With an extensive market experience of over 80 years, the company offers more than 300 products which include whole food supplements, veterinary formulas, and herbal treatment solutions.

Bacopa Complex is included in the MediHerb product line, which features herbal treatment solutions for a variety of ailments.

Bacopa Complex is a combination of four herbal ingredients: Eleuthero, Brahmi, Schisandra and Rosemary. Eleuthero is an adaptogen and it is believed it supports adrenal function when the body is challenged by different stressors. Research focuses on investigating its benefits on various stress symptoms and anxiety disorders such as obsessive compulsive disorder or panic attacks. The herb may also enhance mental acuity and physical endurance and is successfully used by athletes and sports enthusiasts.

Brahmi or Bacopa Monnieri originates in the Ayurvedic medicinal system. It is used for its tonic and adaptogenic properties. Evidence of clinical studies and scientific research shows Bacopa Monnieri may successfully fight symptoms of anxiety disorders including obsessive compulsive disorder, panic attacks or social anxiety disorder. A double-blind study where 46 healthy adults were given a daily dose of 300 mg of Bacopa Monnieri or a placebo for 12 weeks, revealed 13% higher learning and memory rates in the Bacopa group compared to the placebo group. Also, anxiety levels registered by the Bacopa group were 27% lower than for the placebo group.

Bacopa Monnieri is considered generally safe when used on the short term, whereas long term use is not fully understood. Side effects have been reported and may include nausea, fatigue, bowel movement, stomach cramps, and dry mouth.

Bacopa Complex represents a mixture of four herbal extracts: Schisandra, Eleuthero, Rosemary, and Brahmi. Brahmi or Bacopa Monnieri was first used within the Ayurvedic medicinal system for its adaptogenic and tonic properties. Research has shown that Bacopa may fight symptoms of anxiety disorders, such as panic attacks, obsessive-compulsive disorder or social anxiety disorders. A double-blind clinical study in which forty-six adults were offered either a dose of 300 mg Bacopa Monnieri on a daily basis or a placebo for twelve weeks, has shown that their memory and learning rates in the Bacopa group increased with almost 14%, while the placebo group only registered a decrease of 27% in their anxiety levels.

Despite the fact that it is regarded as generally safe on a short-time usage, long-term usage is yet to be fully understood. There are some possible side-effects like fatigue, nausea, stomach cramps, bowel movement and dry mouth.

Another ingredient found in this formula is Eleuthero; an adaptogen thought to support the adrenal process throughout challenges for the body with different stressors. Studies have been focusing on observing its beneficial effects on a variety of stress symptoms or anxiety disorders like panic attacks or obsessive-compulsive disorder. Due to the lack of client testimonials, the product’s efficacy may only rely on the brand or label and manufacturer specification.

4) What Bacopa Complex Does?

Bacopa Complex is sold in the form of bottles that possess 40 tablets each. A bottle is usually enough for forty days of treatment. By having an average price in comparison with similar dietary supplements, Bacopa Complex can be purchased either from manufacturer official website or some offline or online retailers. If bought in bulk, retailers may offer promotions and discounts, depending on the quantity.

There are no free trails, thus the client can only base its purchase upon the information found on the retailer or manufacturer website and he/she can’t try it before buying it.

The manufacturer recommends taking 1 tablet 3 – 4 times daily. Certain contraindications are mentioned by the manufacturer. There are no reviews posted online for Bacopa Complex.

Over the past decades, diseases such as Alzheimer’s disease, dementia, and other neurodegenerative disorders have known an unparalleled increase, and with it the variety of treating or preventing these illnesses. Bacopa Monnieri is one of the herbal remedies targeting brain and cognitive function, from mood and memory to focus and learning. Other ingredients featured by Bacopa Complex such as Eleuthero and Schizandra have also been researched in both human and animal trials, and most their benefits are supported by some kind of scientific evidence. However, the entire formula has not been researched as such, nor are there consumer reviews to help us conclude towards the formula’s effectiveness or ineffectiveness. 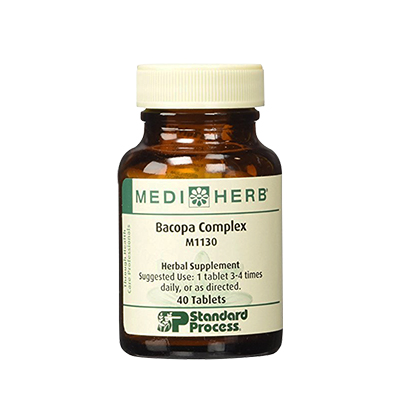 clear
Q:
What are the Bacopa Complex ingredients?
A:

Q:
Bacopa Complex is all about what?
A:

Bacopa Complex is presented as an herbal formulation that was marketed as a reliable support of several bodily processes and functions. The manufacturers, Standard Process, states that the combination provides a normal physical endurance and memory function while enhancing clarity, nourishing the central nervous system and alleviating the effects of occasional and temporary stress. The formula is for adult-usage only and should be kept away from pregnant or lactating women.

Neurodegenerative diseases like: Alzheimer's or dementia have known an unparalleled increase in the past few decades, thus people have been trying to come up with solution for treating their symptoms without utilizing prescribed medication. Moreover, they even focused on finding ways of preventing these disorders.

Among the ingredients featured in Bacopa Complex, like: Schizandra and Eleuthero have been studied in both animals and humans and their beneficial aspects are somehow supported by some scientific evidence. On the other hand, this particular combination has not been researched, and there are no client testimonials either to generally conclude its in Effectiveness or Effectiveness.

I’ve taken it only for a few days, and I feel much more aware and patient, and less scattered. I’m very excited to have found some relief from my usual ADHD, mystery neurologic-type symptoms, fatigue, brain fog, crankiness, and short term memory troubles. I can organize my day, remember important things, and be a better mom!

Title for your comment
Long awaited relief
Have you tried this product?
Yes
Reply