Doctor’s Best was founded in 1990 and currently offers therapeutic nutrition solutions which embody the best that traditional knowledge and current scientific research have to offer. The company’s current product portfolio includes products which target a variety of ailment claims, including brain and memory, mood enhancement and sleep and relaxation.

Extra Strength Ginkgo is recommended exclusively to adults. People taking any kind of prescription medication are advised to consult a physician prior to use.

1) What is Extra Strength Ginkgo?

Extra Strength Ginkgo is based on a standardized extract of Ginkgo Biloba leaf. The manufacturer claims the supplement contains less than 5 ppm (0.0005%) of Ginkgolic acid, which can cause serious skin allergic reactions.

The standardized Ginkgo Biloba extract used here contains a minimum of 24% Flavone glycosides and 6% Terpene lactones. Although the Ginkgo Biloba leaf contains more than 40 chemical compounds, these two are accounted for most of the beneficial properties of Ginkgo. These two active ingredients have been established to regulate peripheral blood flow (brain, legs, and arms) and to control levels of important brain neurotransmitters. Hence Ginkgo plays an essential role in brain function health and may help with memory loss, depression, and age-related mental impairment.

Ginkgo Biloba extract is also known as a powerful antioxidant, acting as a free-radical scavenger. In this way, it helps prevent damaging peroxidation of cell membrane lipid components and prevent free radical damage. For example, preliminary research although inconclusive showed small improvements in brain functions (particularly memory) in patients with age-associated memory impairment diseases (such as Alzheimer’s and dementia).

Side effects of Ginkgo Biloba are rare and include headaches and dizziness.

3) Does Extra Strength Ginkgo Work and it is Safe?

Doctor’s Best Ginkgo is an herbal product that is claimed to be among the best of its type. While there are many Gingko-based products on the market, the manufacturer claims their product bypasses other supplements.

Gingko Biloba is an herbal extract used in traditional Chinese medicine. Many manufacturers are using this plant as they believe it will improve mental functioning, but the evidence we have does certainly not back up this claim. Furthermore, gingko has been associated with some dangerous properties. There are constituents in ginkgo leaves that may affect blood clotting, so people with bleeding disorders should avoid gingko-based products. People with epilepsy (or anyone with a history of seizures) should also prevent this ingredient, as it may increase the frequency of seizures.

The addition of Gingko Biloba in formulas may be appealing to consumers. However, while this plant is considered safe with side effects rarely occurring, headaches, gastrointestinal problems, dizziness, bleeding complications and skin reactions have been reported with gingko use.

We believe that it is important to know a little about the functioning of the brain and why an amino acid supplement is the only one that works in unison with the brain. The biggest problem with herbal remedies is that herbs are not naturally found in our food sources, as amino acids are (eggs, meats, whole grains, etc.). As such, the herbs are prevented from passing through the blood-brain barrier while the amino acids are allowed through and can affect the brain.

The official website lacks customer’s testimonials. However, we were able to find some testimonials displayed on various retailers’ websites. These testimonials are mostly mixed. While some consumers reported positive results after using this supplement, others reported no results whatsoever.

The daily recommended dose of Doctor’s Best Ginkgo is 1 or 2 capsules with food. The website indicates that it may take up to 4 weeks of use before someone notices results.

Doctor’s Best Ginkgo price per capsule is what makes it of an excellent good value. A bottle usually contains 120 capsules, which should be enough for up to two months of treatment for the average user. Compared to similar herbal supplements, Doctor’s Best Ginkgo can be considered inexpensive.

Doctor’s Best Ginkgo cannot be purchased directly from the manufacturer’s website, but the company does offer a “map of possible offline retailers.” The user must enter his physical address and search for nearby shops. This supplement is also available for purchase from numerous online retailers. If you choose to place your order online, please take into consideration the shipping costs as well.

Consumer reviews for Extra Strength Ginkgo report increased quality and great value for money. The manufacturer mentions no potential side effects. The recommended dosage is 1 tablet taken once or twice daily.

The marketed benefits of Extra Strength Ginkgo are enhanced mental function and memory and brain-blood circulation. However the benefits of Ginkgo Biloba extend beyond brain and cognitive functions, to areas such as increased blood flow, free radical inhibition, treatment of Tinnitus and mood enhancement.

Ginkgo Biloba is one of the most researched herbal ingredients today and one of the best selling dietary supplements in the U.S. today. Consumer reviews for Extra Strength Ginkgo are positive as well, as consumers all ages report the formula benefits their memory and has a fair price. Like all Ginkgo extracts, this too may have side effects. However, the product has the advantage of using a standardized extract of Ginkgo and of receiving positive reviews over many other alternatives available on the market.

Still, we recommend caution since the main ingredient has been sometimes reported to have certain side effects and to interact with prescription drugs. 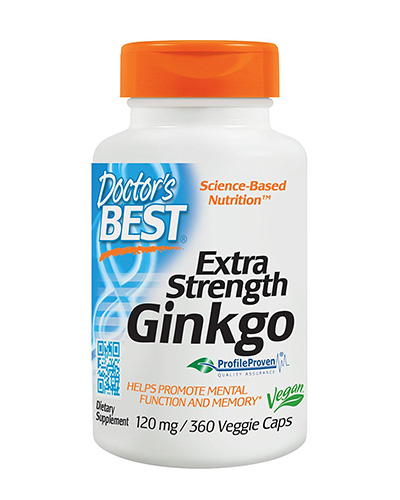 clear
Q:
What are the core ingredients in Extra Strength Ginkgo?
A:

Q:
Extra Strength Ginkgo is all about what?
A:

Doctor's Best is a relatively unknown manufacturer for the common user, but nevertheless, a company that offers a wide range of products, from brain supplements to vitamins and herbal remedies.

This formula contains Gingko Biloba. While this may be appealing to some consumers (Gingko is one of the most popular ingredients in herbal supplements), its Effectiveness has never been fully proven. In fact, this ingredient has been associated with some unwanted side effects, and due to this fact, we would recommend our readers to focus on formulas that have been fully researched and proven to work.