Rosemary Herbal Oil is a botanical remedy recommended in the treatment of damaged hair, scalp disorders, in symptoms associated with rheumatism and gout, as well as muscular aches. It is produced by Mountain Rose Herbs.

Mountain Rose Herbs is an herbal formulations manufacturer and distributor from US. The company does not have such a wide online distribution network therefore we cannot say much about its reputation among consumers from this perspective. Nonetheless, it has been on the market for slightly more than 25 years and it tries to sell only certified organic formulas. It also works primarily with farmers that are certified organic and is itself an organic herbs processor.

According to the manufacturer, Rosemary Herbal Oil contains certified rosemary leaves infused in a base of organic olive oil. It is promoted as versatile oil with many uses. It should have a pleasant smell as rosemary is also used as an aromatherapy herb. The Rosemary Herbal Oil formulation is addressed to individuals who suffer from chronic pain associated with various rheumatic disorders (like back pain, neck pain) or with the acute symptoms associated with gout. Moreover, the formula can help persons with itchy scalps and dandruff, as well as with damaged hair.

1) What is Rosemary Herbal Oil?

Rosemary Herbal Oil has as core ingredient organic certified rosemary leaves. This herb has many uses in folk medicine, for instance it may support memory improvement, hair growth, and a healthy digestion. Moreover, it may modulate muscle aches, optimize blood circulation and also provide help in the well-functioning of the nervous system. According to lab studies, rosemary has antioxidant and anti microbial properties. Specialists have also discovered that rosemary may increase blood sugar levels and slow down bone formation.

Otherwise, clinical research on the many benefits and the safety of rosemary is not thorough. As far as side effects are concerned, rosemary is not recommended to pregnant women as a medicinal herb (though it is safe as a spice in foods). This is because the plant may cause miscarriage. It could also increase menstrual flow, thus it might not be good for women with heavy periods. Rosemary may lead to adverse effects when consumed in large quantities, like vomiting, spasm, pulmonary edema (rarely) and even coma. This is because of it has volatile oils in its composition.

The quality and safety of Rosemary Herbal Oil has not been overseen by the Food and Drug Administration, however this is a usual characteristic of herbal remedies.

Rosemary Herbal Oil is based on organic rosemary leaves, which have many traditional uses. As a medicinal plant, rosemary has been used for a long time for the treatment of muscle pains, memory problems, hair loss, stomach upsets, and circulatory and nervous system conditions. Laboratory studies have shown that rosemary can act as an antioxidant. Also, rosemary oil has antimicrobial properties according to specialists. There are few clinical trials on humans regarding rosemary. Some researchers showed that rosemary if combined with other aromatherapy plants, may reduce cortisol levels. This is a hormone whose main function is to increase blood sugar. Having increased levels of cortisol for a longer period may lead to muscle wasting. It also slows down the formation of bones. Cortisol is usually released due to a low level of blood glucocorticoids but also because of stress.

The herb is considered safe when consumed as a spice in foods, but rosemary oil is toxic when used internally. As side effects, rosemary may cause miscarriage and increase menstrual flow. When used in large quantities, the volatile oils it contains may cause spasms, vomiting, coma and fluid in the lungs.

The formulation marketed by Mountain Rose Herbs has not been evaluated by the Food and Drug Administration. Consequently its quality cannot be guaranteed. The producer does not mention any side effects on its official website. As regards suggested use, the manufacturer gives some details on its website as to how to use Rosemary Herbal Oil as a treatment for scalp conditions and damaged hair. You should first warm the oil a little, rub a bit on the scalp or hair and leave on for about one hour.

We have not found any online customer reviews, which should prove that this product may not have been tried by many clients.

5) Precautions of Rosemary Herbal Oil Use

The average price per ounce recommends Rosemary Herbal Oil as being affordable. The product may be purchased directly from the manufacturer, Mountain Rose Herbs. You place your order online, or by fax, by mail or by telephone. You may also pick up your order from the Mountain Rose Herbs location. You can return the product if you are not satisfied with it, in 60 days from the invoice date. The producer is going to offer you a full refund, but you will have to pay the shipping charges, which may be some fairly expensive. They are not charging restocking fees.

Unfortunately, the formula is not available at many online retailers.

7) How to Take Rosemary Herbal Oil

Mountain Rose Herbs sells the formula in bottles of 2 ounces and 4 ounces. It does not give information on possible side effects on its official side. As to directions of use, it advises on how to use the oil for scalp disorders and hair damage. The formula should be warmed, rubbed on the hair or scalp and shampooed after one hour.

Rosemary Herbal Oil is promoted for helping in the treatment of scalp conditions, for repairing hair damage, providing relief from gout and rheumatism symptoms and relieving muscle pains. Rosemary constitutes quite a safe herbal remedy and has been used for various medical conditions for centuries. There is not much clinical research to support its benefit claims however. Further, online consumer reviews on Mountain Rose Herbs’ formula are quite rare so we do not have information about how customers perceived the product. Since there are not many online comments, we are inclined to think that the formula may not have an established reputation. Nonetheless, we believe Rosemary Herbal Oil is worth trying given it is attractively priced. 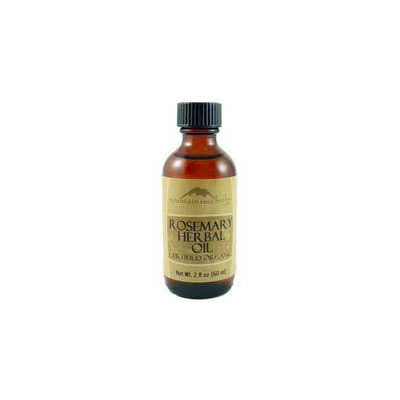 Q:
What is Rosemary Herbal Oil?
A:

Rosemary Herbal Oil is recommended as an organic herbal alternative for modulating symptoms of rheumatism, gout, and muscle aches. It may also work in reviving damaged hair or in the treatment of scalp conditions. The formula is manufactured by Mountain Rose Herbs. Its core ingredient, rosemary has been used for a very long time although clinical research is not sufficient. The product is addressed to individuals with rheumatic and gout disorders, dandruff, itchy scalp and muscular pains.

Rosemary Herbal Oil is a remedy based on organic herbs which are advertised as being effective for scalp conditions, gout, rheumatism, and muscle pains. Rosemary has been used for a long time by people living in the Mediterranean region, and it seems to be a safe herb when used correctly. Clinical research on humans is still not sufficient to prove the herb's Effectiveness. We have not found online consumer reviews about the formula. Thus we do not know whether customers were satisfied with it. In our view, online testimonials may lack because the product is not sold by so many online retailers. All in all, we believe Rosemary Herbal Oil is worth a try as it has an affordable price.

I heard from a friend that this product is amazing as hair conditioner. So I also ordered Rosemary Herbal Oil about three weeks ago but I have to say I’m not impressed. It does make my hair smooth but I still have too much dandruff.

I bought Rosemary Herbal Oil for my dad, he suffers from backaches a lot. He was really pleased with it and said he likes it because it does not have that strong fragrance other products have.