Ginkgo Biloba is promoted as a dietary supplement which may help improve certain cognitive functions such as memory, focus, thinking skills and learning abilities. Behind this product there is a company called Alfa Vitamins whose history begins in the year 2000.

Based in Doral City, Florida, their facility comes with laboratories that use the latest technology and have the ability to produce approximately 250.00 units on a daily basis. Furthermore, the company prides itself with having more than 1600 retailers from all around the world, which includes recognized pharmacies and various other commercial establishments. The company follows the guidelines set forth by the Department of Agriculture as well as by the United States Pharmacopoeia.

Ginkgo Biloba is based on the beneficial effects of a single ingredient, which has been intensively researched over the past decades. It is mainly suggested for people that who face memory or concentration issues and elders or adults whose unhealthy lives are starting to catch up to them and interfere with their thinking abilities.

Ginkgo Biloba represents a dietary remedy whose main beneficial effects are linked to the enhancement of cognitive function. The main ingredients enjoys historical therapeutic value having been used for thousands of years.

Ginkgo Biloba is an herb that has been consumed as food in China because of its valuable nutritional qualities. Extracts from this plant are generally included in supplements that are meant to help with symptoms of diseases such as Alzheimer’s or other forms of dementia. Because it enhances blood flow to the brain, it can also be given to older people who suffer from mood disturbances and concentration difficulties. Furthermore, thinking disorders linked to depression and Lyme disease may be improved with this herb. The active substances found in this ingredient work to raise the antioxidant levels and to improve the neuronal connection.

Additionally, this herb appears to feature substances that are capable of killing fungi and bacteria which are usually responsible for bodily infections. Although studies are still being conducted, the majority of the clinical research proved the plant enjoys some positive effects. Other regions of the body such as eyes, immune system and cardiovascular system may also be noticeably enhanced as a result of using this ingredient.

3) Does Ginkgo Biloba Work and it is Safe?

Considering the beneficial effects shown by Ginkgo Biloba throughout time, Alfa Vitamins has created its own formula meant to enhance thinking, concentration, and memory. Despite the fact that it contains only this one ingredient, the extract included complies with the regular standardization of 24% flavone glycosides and 6% terpene lactones. These are the active ingredients found in this herb which account for the formula’s spectrum of benefits. For instance, flavone glycosides possess antioxidant qualities. This means that they help prevent the damage done by free radicals to the brain. On the same note, terpene lactones enhance memory because they raise the quantity of Choline in the brain. Choline helps with the synthesis of Acetylcholine, which is a neurotransmitter able to influence the quality and rapidness of neuro-transmission.

Research showed that preparations obtained from this herb may help treat some conditions that include dizziness, inflammations, circulatory issues, and memory problems. According to some sources, a study conducted in 2002 revealed that the plant can offer support in memory deficits that occur in patients who suffer from Alzheimer’s disease.

It appears that the effects of the main ingredient rely on the fact that it generally improves the blood flow toward the brain, an improvement which results in preventing certain blockages linked to blood vessels. Because these blockages happen when some components of the blood that aid in clotting eventually get clumped, by avoiding their occurrence, the brain can function better.
Overall, the side effects are relatively rare and not serious. However, some individuals may experience nausea, upset stomach, and diarrhea. Also, people who have recently suffered seizures, diabetics, and those who have blood disorders should probably avoid usage. If they really desire to follow the treatment, they should consult a personal doctor.

There are online customer testimonials about Ginkgo Biloba. What is being reported includes: “It’s a good product for the mind and the body,” “Since I started taking it, I can remember things that I wouldn’t even dream of,” and “I give this supplement to my child because she had some problems in school, but I noticed she’s been doing better since.”

A positive quality of the manufacturer is the fact that they offer free shipping for all domestic orders (Puerto Rico and USA) in less than 24 hours. The product is sold in bottles, and each contains 60 capsules. Because the daily recommended dosage is of one capsule per day, a bottle should last for up to two months of usage. Compared to similar supplements, its price is viewed as affordable. Additionally, on the manufacturer website, they have a “points for redemption” system that allows customers to lower their costs by purchasing more than one bottle at once. The supplement can be bought directly from the manufacturer’s website or one of their many retailers online or from local stores or pharmacies.

Certain Ginkgo Biloba side effects may appear, particularly if the dosage isn’t properly followed. Some of these include nausea and headaches.Furthermore, the manufacturer advises individuals who are taking anti-coagulant medication to avoid using of this supplement.

Presented as a natural remedy that features a popular and effective ingredient called Ginkgo Biloba, this supplement appears to help with cognitive functions that include memory, concentration and thinking abilities. The active ingredient was chosen because of its research based effects on the brain and consumers testifying to its effectiveness. Although it may help with symptoms linked to some diseases such as depression, dementia or Alzheimer’s disease, Ginkgo Biloba is not intended as a treatment for them, but only comes as an addition to prescribed medication. The unwanted effects that may occur when this product is taken are relatively few and include nausea and diarrhea.
All in all, this product seems to be a good alternative among Ginkgo Biloba based supplements. 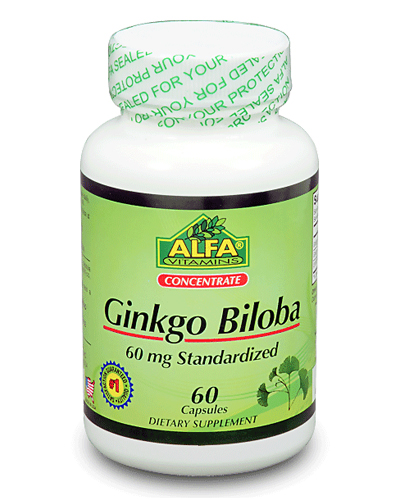 Q:
Alfa Vitamins Ginkgo Biloba is all about what?
A:

Ginkgo Biloba is a dietary formula which is meant to enhance cognitive functions which include concentration, thinking abilities and memory. The company responsible for this remedy is called Alfa Vitamins.

This product features just one ingredient, but with known beneficial effects. These herb extracts have been analyzed by researchers throughout time and it is credited with positive effects on symptoms linked to dementia, depression, Alzheimer's disease and other neuro-degenerative disorders. Moreover, this supplement may boost immunity by providing a series of antioxidants which help the body fight against the damage done by free radicals. Although safety concerns are minimal, the manufacturer advises individuals who are taking blood-thinning drugs like clopidogrel, aspirin, heparin or warfarin to avoid consuming this supplement.

Presented as a natural remedy that helps people focus and remember things with more ease, Ginkgo Biloba includes a single ingredient. Because of its popularity throughout time, the main ingredient has been used in a wide array of products that target the enhancement of cognitive functions. Unfortunately, the manufacturer doesn't offer sufficient information regarding its specific benefits.

On the other hand, they advise people who are taking medication such as dipyridamole, ticlopidine or aspirin as well as those who are following a treatment that feature anticoagulant drugs to avoid use because it may cause more problems than it may help. Considering the client testimonials as well as the studies conducted on this ingredient, it can be stated that the supplement is effective and can be found at affordable prices. When the treatment is followed accordingly and no meals are skipped, people should observe its positive impact on their daily lives.

I was skeptical at first about this product. A friend told me that if I take this, I\’ll be able to focus better and think faster. Oh well… he was right! I like it.

This product changed my life. If I couldn’t remember where I’d put my keys before.. now I can even remember new phone numbers or addresses. I would totally recommend this to anyone that has memory problems!