Ginkgoforce is a single ingredient herbal supplement designed to particularly help patients suffering from Raynaud’s Syndrome and tinnitus. Ginkgo biloba supplements are frequently prescribed treatments for these two conditions. The formula is sold under the A. Vogel brand which commercializes many other nutraceuticals, mostly herbal based.

Ginkgoforce delivers 90mg of active substance per tablet and the daily recommended dose is of 2-4 tablets. This means that by complying with the manufacturer’s recommendations, users will get 180-360 mg of Ginkgo extract. In the clinical trials involving Ginkgo biloba supplements as potential treatments for the conditions mentioned above dosages of 120-360 mg (for Raynaud’s) and 240 mg (for tinnitus) were used. So we can say that A. Vogel’s formula is able to deliver adequate amounts of its key ingredient to reduce the symptoms of the diseases which it is advertised for.

The product is addressed only to adults over 18 years old, except pregnant and nursing women, people suffering from bleeding conditions, and people programmed for any medical intervention.

Ginkgo has been traditionally used for thousands of years in the treatment of various health problems like: asthma, skin conditions, tuberculosis, or fluid discharges. Modern medicine has found new uses for this highly researched herb, but some scientists believe that many of its traditional uses have been forgotten.
Nowadays, Ginkgo supplements are mainly advertised as memory enhancers. Another popular use is in the maintenance and optimization of circulatory system functions where it acts as a vasodilator and increases both oxygen and blood flow to the heart and organs. Ginkgo biloba is also being investigated as a potential adjuvant in the treatment of cancer, eye conditions, multiple sclerosis, pulmonary interstitial fibrosis, hearing loss, or mood disorders (anxiety, depression)

Ginkgo biloba is one of the oldest living tree species in the world. The herbal extract has been intensively researched for its potential benefits in a broad spectrum of health areas, such as: memory, circulatory system, eye health (macular degeneration, diabetic retinopathy, or macular degeneration), anxiety and other mood problems, MS, Raynaud’s, schizophrenia, tinnitus, vertigo, and many others. Unfortunately in many of these claims, there isn’t enough evidence to confirm the effectiveness of this extract in helping reduce the symptoms.

One thing is certain, Ginkgo possesses potent blood thinning qualities which is why it may be effective in restoring cognitive function, improving circulatory system function, and generally improving the blood and oxygen flow to the eye, brain, extremities, and other organs. Raynaud’s Syndrome is characterized by poor circulation to the fingers and toes as result of temperature or stress. At this time there are a few therapies used in the treatment of this condition, one of them being vasodilatation through various drugs. Ginkgo biloba is the herbal approach used in the treatment of Raynaud’s. Evidence suggests that a daily dose of 160 mg of Ginkgo can lower the pain in patients suffering from this condition.
Tinnitus is a condition whereby people hear sounds that don’t exist (buzzing, ringing, or swooshing noises). Tinnitus is usually a symptom of an underlying physical or psychological condition. Ginkgo biloba is one of the frequently prescribed treatments for this problem. There is some evidence that a standardized extract of Ginkgo called EGb 761 may reduce the symptoms of tinnitus, but that is not enough as to demonstrate that all extracts are as effective.

5) What You Need to Know Before Taking Ginkgoforce

6) How Much Does Ginkgoforce Cost?

The product is sold directly through the official A. Vogel web-site, but at this time it is out of stock. Other online retailers carry the formula in 30 or 60 capsule bottles. The 60 capsules bottle (a month’s supply) is sold for approximately $20 which is a moderate price for a Ginkgo biloba supplement. No discounts or other offers are available at this time.

Human trials are numerous and have managed to offer some evidence of the extract’s health benefits. Studies involving memory impaired patients (including individuals diagnosed with Alzheimer’s disease or dementia) are the most abundant, so the evidence in this area is the most convincing. Unfortunately, for many of the other potential uses there is simply not enough relevant data to support the benefit claims issued by herbalists and naturopaths. Many of the human trials conducted so far don’t last long enough, include a low number of participants, or result in inconclusive findings. Because of this they cannot be used as valid evidence of Ginkgo’s safety and potency.

Ginkgoforce is a very simple nutritional supplement in terms of composition. A single key ingredient is included in the formula, so users don’t have to worry about potential ingredient interactions. The product can however interact with the active chemicals of other drugs, mainly blood-thinning medication. Certain side-effects are possible to occur, although highly improbable. Some of these include digestive discomfort, nausea, allergic reactions, skin problems (itching, rash), or headaches. We advise consumers to watch out for any of these symptoms and if they persist, immediately discontinue use and turn to specialized advice.

The number of consumer testimonials referring to this particular formula is very limited at this time. There is also no evidence that the product itself was used in any of the existing clinical trials. 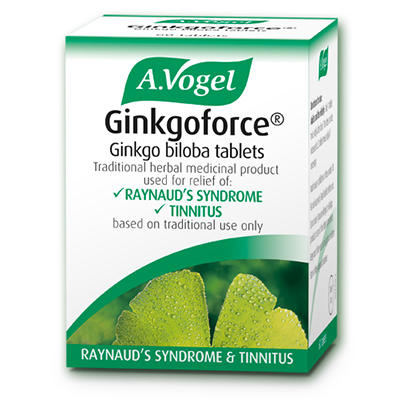 Customers Questions and Answers with Ginkgoforce

clear
Q:
What are the active ingrediens in Ginkgoforce?
A:

Ginkgoforce looks like a potent source of Ginkgo biloba, a popular extract recommended for a wide range of health conditions. This product is advertised to help with the specific symptoms of two health issues, namely Raynaud's Syndrome and tinnitus. This does not mean that the supplement cannot be used to improve and maintain memory, help with circulatory issues, or support eye health. However, before starting to use the formula for any health problem, please address your doctor and make sure he/she agrees with you and the product does not threaten your health in any way.