Ginkgo Biloba Extract 24% is an herbal formula offered as a reliable aid for the memory, supporting memory and mental alertness.

The company that manufactures this formula is Swanson Health Product founded in 1969 as a family business. Today the company owns a 120,000 sq feet facility which houses their manufacturing, storage, shipping, marketing and customer care center altogether.

Ginkgo Biloba Extract 24% contains standardized quantities of glycosides (24%) and terpene lactones (24%) which are claimed to guarantee the formula’s effectiveness. The product is offered as a single active ingredient natural solution, and is covered by a 100% money-back guarantee.

Ginkgo Biloba Extract 24% is a single ingredeint herbal based nutritional supplement. Ginkgo Biloba is a tree native to China and cultivated in the North and East states of U.S.A. The active substances are the Ginkgo flavone glycosides which Research showed to possess powerful antioxidant properties. Ginkgo is also believed to support memory, circulation and sexual potency.

Most of the studies conducted on Ginkgo Biloba supplements used the standardized quantities (24% flavone glycosides and 6% terpene lactones).

Mild side effects have been reported by a reduce number of users, such as: headaches, stomach upset or dizziness. Reports of internal bleeding have been recorded, but it is uncertain whether ginkgo or other blood-thinning drugs caused these adverse effects.

3) Is Ginkgo Biloba Extract Right for You?

Promoted as a dietary supplement, Ginkgo Biloba presumably offers the brain an herbal boost. This product contains Gingko Biloba extracts from leaves, standardized with 24 percent flavone glycosides and six percent terpene lactones. Ginkgo Biloba comes from the Ginkgo tree. It has been used by Chinese for thousands of years in ailments and was first introduced to Europe in 1700’s.

Ginkgo Biloba works by increasing blood flow to the brain and throughout the entire body’s network of blood vessels, which supplies oxygen and nutrients. It has to groups of active components: flavonoids and terpene lactones. Another benefit of Ginkgo Biloba consumption is an increase in metabolism efficiency and regulation of neurotransmitters. However, there are some side effects related to the usage of Ginkgo Biloba, such as gastrointestinal discomfort, headaches diarrhea and vomiting.

Due to its Ginkgo Biloba content, this product is not recommended for pregnant women or in combination with antidepressant drugs, known as monoamine oxidase inhibitors because it might lead to a negative drug interaction.

5) Precautions of Ginkgo Biloba Extract Use

Swanson Health Product is a company that offers products at moderate to cheap products. Ginkgo Biloba, in comparison with other supplements found on the market, is promoted at a low price, affordable for people who want to try to enhance their brains by using herbal supplements. It is sold by bottles containing 120 capsules with a total of 60 mg.

The Swanson Health Product’s formula comes in bottles of 240 capsules of standardized Ginkgo Biloba extract. The suggested use is of 2 capsule daily taken with water during meals.Ginkgo Biloba Extract 24% received good reviews from its users, claiming high effectiveness even after long periods of use.

8) Our Verdict on Ginkgo Biloba Extract

Ginkgo Biloba Extract 24% is a dietary supplement designed as a support for brain’s health in terms of enhancing mental alertness and memory.

The formula comes at an affordable price and contains standardized quantities of active ingredients. Special precautions are issued for people under blood-thinning medication, as with most of Ginkgo-based supplements.

The formula is marketed as a natural way to achieve the desired results, but there is little information about targeted age range. Also the product doesn’t seem to stand out from similar herbal based supplements. However, consumers’ testimonials are positive in terms of increasing recall, clearer thinking, better focus and increased alertness.The product is not FDA approved, so the healthcare’s professional consent is highly recommended. 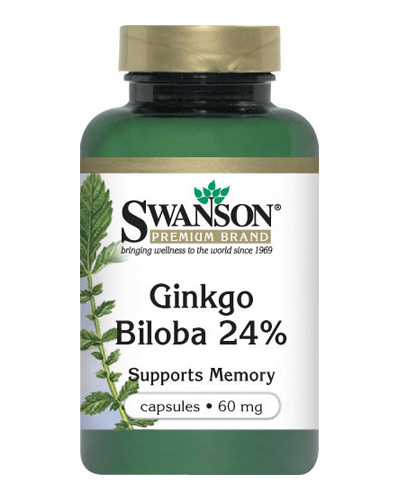 clear
Q:
What are the Ginkgo Biloba Extract ingredients?
A:

Q:
What is Ginkgo Biloba Extract?
A:

Ginkgo Biloba Extract 24% is an herbal formula claimed to support the proper functioning of the memory, focus and mental alertness. The company behind the product is Swanson Health Products. The formula includes standardized quantities of glycosides (24%) and terpene lactones (24%), active components of the herbal extract from Ginkgo Biloba. The core ingredient is known to have potent antioxidant properties as well. The formula may be potentially dangerous for people with blood thinning problems, which is why you should consult with a healthcare practitioner prior to use.

Even though there are many Ginkgo Biloba supplements on the market, Swanson's product is advertised as a low priced and effective brain booster. Despite the fact that there are not sufficient online testimonials to generalize an opinion about this remedy, the few that are prove its efficiency. Because is a supplement, it is important to be taken within label dosages and combined with a healthy lifestyle. Pregnant women and people taking anti-depressants should avoid this supplement.

It’s really cheap compared with other products and you have the possibility to choose from bottles with 120 or 240 capsules. I think that having options is important.

This is a natural remedy for my memory, I don’t know how it works for you, but personally I don’t trust complex formulations that may include all kinds of ingredients, all coming with their own side-effects.