Bacopa Monnieri is a dietary supplement designed to support a healthy memory. The formula is marketed by Advance Physician Formulas, a company specialized in the production and sale of nutritional supplements. The company claims their products are science-based and are developed by specialized professionals (doctors and herbalists) using the highest quality raw materials. Dr. Ray Sahelian, the worldwide renowned nutritionist and author, formulated several products for the company.

The manufacturer claims the supplement uses a standardized extract of Bacopa Monnieri, (meaning 45 mg of Bacopa Saponins containing 45 mg of Bacosides A and B). Standardized extracts are always superior to other extracts in terms of safety, because generally these standardized forms are used in clinical trials and research studies, hence specialists know what to expect from the compound when it comes to potential benefits and associated side effects.

The manufacturer does not provide much information regarding other benefits of the formula or specific ailment claims. The supplement being reviewed is however gluten free, therefore people with an intolerance to gluten can still safely use the formula. Bacopa Monnieri is designed to help adults who are interested in maintaining a healthy cognitive function, especially a healthy memory function.

1) What is Bacopa Monnieri?

Also known as Brahmi, the herb is an Indian plant traditionally used as an Ayurvedic medicinal treatment for a variety of conditions such as asthma, epilepsy, ulcers, indigestion or inflammations.

Modern scientists have discovered that the plant consists of a large number of active constituents including Alkaloids, Saponins and Bacosaponins (Bacosides A, B etc.). Bacosides A and B appear to have antioxidant and liver protective potential. Out of a total of 225 mg Bacopa per capsule, 45 mg consists in Saponins Containing Bacoside A and B.

Traditionally, Bacopa Monnieri was used for the treatment of epilepsy and asthma, ulcers, tumors, indigestion, anemia, and leprosy. Also, this herb has potent antioxidant properties which help prevent free radical damage to the brain and body.

A study performed on laboratory animals indicated that a Bacopa Monnieri extract might have a positive effect on the memory function and other brain function parameters. Other more recent research made in humans suggest that extracts from this herb significantly improve cognitive functions by leading to faster and better learning and enhanced retention and memory capacity.

Extracts from this herb are also being used as a brain tonic because it is believed that it has restorative and rejuvenating properties. Studies suggest that the plant might also be useful when dealing with stress and nervous anxiety. Also, herbal extracts are credited a positive effect on the cardiovascular system. Proposers claim that the plant can clean the blood and the functions of the liver, kidneys, and lungs and that in the process, it might also stimulate the growth of hair, skin, and nails.

Side effects of Bacopa-based supplements are usually associated with the long-term use of the plant under various forms. Not enough is known about its effects on pregnant and breastfeeding women; therefore, caution is advised.

4) What Bacopa Monnieri Does?

5) Precautions of Bacopa Monnieri Use

6) How Much Does Bacopa Monnieri Cost?

The supplement is available for purchase on the manufacturer’s official website exclusively. No other online retailers were identified at the time of this review. The dietary supplement is currently being sold at an affordable price, and one bottle containing 60 capsules should be enough for a two month supply. The formula is available in convenient two month supply bottles, given the daily dose is not exceeded. For items returned within a 30 day period from purchase, the company offers a full or partial refund (less shipping and handling costs).

The company offers free samples of several products at the time of this review, and may potentially offer for this product as well. A permanent free sample policy is not however disclosed.

7) How to Use Bacopa Monnieri

Advance Physician Formulas product has not been involved in clinical trials. In order to reduce the occurrence of potential side-effects the company claims they use the minimum amount of active ingredient known to be efficient. The suggested dose is 1 caplet a few times a week or as recommended by the healthcare professional. No other precautions or warnings are issued by the manufacturer. Consumer reviews are scarce and insufficient in our endeavor to establish the formula’s actual effectiveness.

The formula may potentially work, if we judge by the fact that Bacopa has been generally reported to give good results. It is however unclear why a consumer would chose this product over other alternative products.

The active ingredient is considered potentially safe with no noticeable side effects. However Bacopa Monnieri is not an FDA approved supplement and should be considered with caution by those with known medical conditions. 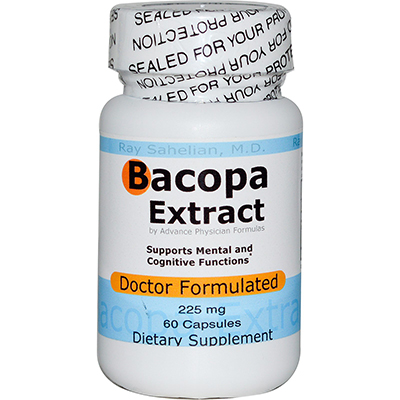 clear
Q:
What are the active ingrediens in Bacopa Monnieri?
A:

Q:
Bacopa Monnieri is all about what?
A:

Q:
Are Bacopa Monnieri benefits actually a reality?
A:

Bacopa monnieri has become increasingly popular in the last few years among dietary supplements. Most research has proven it to be effective for certain therapeutic purposes, while others still await scientific proof. Traditional Ayurvedic medicine has used this plant, and many others for centuries, which is why Bacopa monnieri enjoys so much popularity today and why it is featured more and more in dietary supplements. Although there is some scientific ground for some of the therapeutic claims of the plant, most supplements have different concentrations of active ingredients, and not all formulas work for every individual.

Bacopa Monnieri is one of the various formulas that feature this plant as core ingredient and advertise memory to enhance properties. There is little differentiation in this formula and other similar products. Caution is advised when using any dietary supplement.

Before I used to find my every day activities overwhelming. Now it’s been some time and I feel much better, more relaxed.

I am in high school and I am using this. It helps me a lot with my learning process.