Ginkgo Biloba 30mg Review – 8 Things You May Not Know

Ginkgo Biloba 30mg is a supplement aimed to improve blood circulation and promote peripheral blood flow, while also improving memory. It is a herbal-based product that can enhance mental alertness and give consumers a general feeling of well-being. This might benefit people feeling that they are experiencing issues with cognitive functions due to stress, aging or unhealthy lifestyles.

The company that manufactures Ginkgo Biloba 30mg is Pharmavita, under the brand name Nature Made. This supplement producer is widely recognized as being among the leaders in its industry, meeting high quality standards. As an added benefit, which also explains the large customer base the company has, the supplements are sold at accessible prices and there is a quality money-back guarantee.

Ginkgo Biloba 30mg is based on an herbal formulation of ingredients that is meant to improve cognitive function and blood flow through the body.

Ginkgo biloba is an herb native to China that has been used in traditional medicine for hundreds of years. Extracts of this plant contain glycosides and terpenoids, two substances that have a mild antidepressant effect. This makes Ginkgo-based supplements a potential treatment for incipient cases of dementia. There is a nootropic effect linked with use of these products, with many people reporting positive effects on memory and blood circulation after taking products such as Ginkgo Biloba 30mg.

Ginkgo Biloba 30mg is derived from the unique Ginkgo Biloba tree and is aimed to be a memory-enhancing supplement.

Ginkgo Biloba has been used for its positive properties for hundreds of years, especially in Eastern Asia. Although widely studied, the mechanism of action for this plant is still not well understood. What most researchers agree on is the fact that the extracts from Ginkgo biloba function as antioxidants, inhibitors of platelet aggregation, and neuroprotective agents. Although this plant has many other uses, most people recognize it as a memory enhancer. Because Ginkgo biloba improves blood circulation throughout the body, the brain is also better oxygenated. It appears that brain cells function better in the presence of more oxygen. All cognitive functions may be improved as a result of a better oxygenation of the brain cells.

The manufacturer recommends taking two capsules three times daily, with meals. Unfortunately, standard doses for Ginkgo biloba have not been established. Treatments are based on the desired outcome. For instance, the suggested dosage for this particular formula is good for memory impairment, cardiovascular function or poor circulation. Potential interactions may occur with anticoagulants or antiplatelets, or any blood-thinning medications/agents affecting the ability of blood to clot.

After our web research, we were unable to find enough positive testimonials posted online about Ginkgo Biloba 30mg. However, this does not necessarily mean that this formula is ineffective.

Ginkgo Biloba 30mg is relatively inexpensive and has great value. The price per capsule is very low. Each bottle includes 200 capsules, which should be enough for approximately one month of treatment.

You may purchase this product from numerous online or offline retailers. Please note that the price may vary between them, sometimes by a significant margin. Depending on the retailer, you may be offered discounts or money-back guarantees.

If you are taking blood thinners, blood pressure or diabetes medication it is recommended you consult a doctor before taking this supplement. The recommended dose is three capsules each day, taken with a meal, unless advised otherwise by a medical professional.

Ginkgo Biloba 30mg is one of the products available on the market that offers benefits at low risks and costs. It is strongly backed up by medical evidence and many customers report having fewer issues remembering things, staying alert or concentrating after beginning taking this supplement. It would appear that Nature Made manages to do what it claims to: offer high quality at low costs.

As with all health supplements, it is advised you consult a doctor before beginning treatment, to make sure that the condition you are trying to treat isn’t a symptom of a more serious underlining condition. 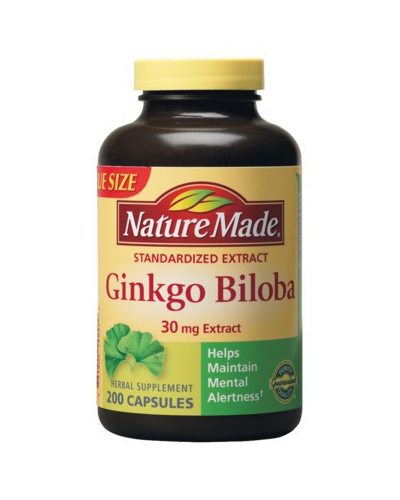 Nature Made Ginkgo Biloba is an herbal supplement aimed to improve blood circulation and memory, to promote peripheral blood flow, enhance mental alertness and general well-being. The formula manufactured by Pharmavite is recommended to people who need cognitive function support as a result of stress, aging or unhealthy lifestyles. Ginkgo Biloba is also used to prevent age related memory loss, Alzheimer's disease and alleviate symptoms of anxiety disorders and depressive mood. Precautions when using Nature Made Ginkgo Biloba include people with blood thinning conditions and pregnant and nursing women.

Ginkgo biloba supplements are among the most popular supplements in the world. Many people take them to enhance their memory, but the results are not the same for everyone. Not only do supplements differ between them but the needs of each are different as well. In other words, this formula may be effective for some and ineffective for others. The placebo effect may also play a vital role in determining this product's efficacy.

Ginkgo Biloba 30mg is said to meet high-quality standards. If you take the suggested daily dosage, you may feel an improvement in your memory function.

This is a good quality product. It helps with my dizziness and headaches.