Vitabase Ginkgo is a standardized extract formula of Ginkgo Biloba. According to the manufacturer, the extract is produced by a European phytopharmaceutical company in compliance with quality control and other regulatory standards available today.

Therefore, the consumer is guaranteed to get optimal naturally-occurring flavone glycosides and terpene lactones, the Ginkgo Biloba active ingredients.

The product is supposed to provide day-to-day support to people who experience a decline in mental abilities (short-term memory, maintaining concentration, or retaining mental focus).

Vitabase Ginkgo is designed for adults. Pregnant and nursing women and people under medication or planning to go into surgery should consult their doctor before beginning treatment.

The manufacturer of the formula is the American company Vitabase. The company claims to manufacture within its products’ full range on USA territory, in facilities inspected and approved by the FDA. Also, the company offers a 60-day money-back guarantee on all its products.

Vitabase Ginkgo is produced from standardized Ginkgo Biloba extract in a 50:1 concentrate.

The use of Ginkgo Biloba for medicinal purposes, mostly as a brain tonic, dates back to approximately 4000 years ago in China. Today, it is one of the most popular herbal ingredients and one of the most frequently prescribed in Europe and gaining increasing popularity in America.

Extensive research has revealed many beneficial properties, including enhancement of circulation, neutralization of free radicals (antioxidant properties), improving the delivery of oxygen to the brain, and strengthening blood vessels. A daily value has not yet been established.

3) Does Ginkgo Biloba Work and it is Safe?

Promoted as a remedy suitable for people who want to enhance their cognitive functions while improving their memory and concentration, Vitabase Ginkgo contains Ginkgo Biloba extracts.

Studies have shown that Ginkgo is one of the best-selling natural medications in Europe and the United States. It has been used to treat blood disorders and improve memory. Some researches support these claims. Thus this herb is considered to be effective.

Ginkgo includes two types of chemicals: terpenoids ad flavonoids, which are believed to possess antioxidant properties. Flavonoids represent a group of plant-based antioxidants that have shown beneficial in protecting blood vessels and nerves from damage. On the other hand, terpenoids should improve blood flow because they dilate blood vessels.

Gingko is widely viewed as a “brain herb” that has also been studied as a memory enhancer when it comes to people with Alzheimer’s and dementia. Some of the research proved it worked. Some unwanted side effects are related to Ginkgo supplements’ usage, and some of these include dizziness, constipation, or stomach upset.

There are online testimonials about Vitabase Ginkgo. What is being reported includes the following:

6) How Much Does Ginkgo Biloba Cost?

Sold by bottles containing 50 capsules and 120 mg, Vitabase Ginkgo is an averagely-priced product. Due to the excellent client reviews, it can be viewed as affordable.

It can be found for purchase either on the manufacturer website or some other online or offline retailers. When bought in larger quantities, discounts and promotions are offered.

7) How to Use Ginkgo Biloba

Ginkgo Biloba is different from other similar products (other single ingredient extract or having Ginkgo as the main ingredient) because, according to the manufacturer, the standardized Ginkgo Biloba extract used to manufacture the formula is made under strict European quality standards, which is superior to those existing in the United States.

There is a 60-day money-back guarantee offered for the product, and consumer reviews are generally favorable. Also, the manufacturer is an experienced company.

Because Ginkgo’s blood circulation enhancement property may interfere with other medications or may be dangerous in case of surgical intervention, we advise you to consult a specialist before beginning treatment. 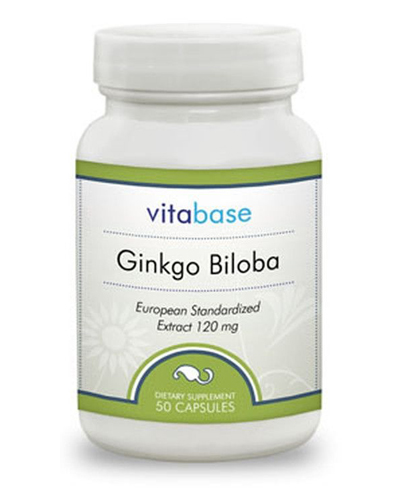 clear
Q:
What are the active ingrediens in Ginkgo Biloba?
A:

Q:
What is Ginkgo Biloba?
A:

Vitabase Ginkgo is an herbal supplement offered by the Vitabase Company. It contains mainly Ginkgo Biloba extract, which acts as a powerful antioxidant and is believed to increase circulation, improve long- and short-term memory, help concentration, and provide optimal levels of naturally occurring flavone glycosides and terpene lactones. This product is meant to assist aging consumers in improving their memory.

Like many other brain enhancement products, Vitabase Ginkgo contains one of the best-selling herbs worldwide, Ginkgo Biloba. Some laboratory studies have proved its properties.

It is a product intended for people who want to improve their cognitive functions, attention span, and concentration. There are some unwanted side-effects related to the usage of Vitabase Ginkgo.

If any of these occur, the consumption should be immediately stopped. It should be balanced with a healthy lifestyle to obtain the desired results because it is a dietary supplement.

My sister was taking this and she says she feels stronger through out the day and her mind is also much clearer. I have recently started using this (for the last few weeks) and I think that I have a better attention span and do not zone out as much. I will continue using this product because I feel that I am getting results from it.

I love this form of Ginkgo Biloba! I feel it working immediately! If I need to take a test or recall facts, I take some liquid Ginkgo Biloba to ensure that my brain will be ready for the task at hand.