Ginkgo Smart Review – Is it Effective?

Millions of people worldwide have reportedly experienced difficulty maintaining focus during work and study hours. Proper lack of attention to detail may affect your quality of work and cause feelings of frustration.

One of the supplements formulated to help increase mental alertness and provide nutrients that improve memory is Ginkgo Smart Maximum Focus and Memory.

The product is manufactured by Irwin Naturals, a well-known company that has been in the plant medicine industry since 1994 and prides itself in developing innovative products for weight management, immune support, and sexual health, amongst others.

Ginkgo Smart Maximum Focus and Memory is intended to provide benefits to the brain and nervous system as a whole.

1) Ginkgo Smart at a Glance

Ginkgo Smart Maximum Focus and Memory is a blend of several herbs, amino acids, antioxidants, and Omega-3 fatty acids, which could enhance cognitive function to achieve a maximum mental capacity.

The Ginkgo Biloba extract has been used as a medicinal ingredient for centuries. It has been used to improve blood circulation, prevent clogging of arteries, and as an antioxidant. Ginkgo Biloba may also be beneficial to people who suffer from Alzheimer’s disease and may help relieve some of their symptoms.

2) What Are Ginkgo Smart Ingredients?

Please keep reading for more details about these ingredients and their benefits.

3) What Does Ginkgo Smart Do?

Antioxidation– Alpha-Lipoic Acid which is one of the active ingredients in Ginkgo Smart Maximum Focus and Memory possesses antioxidant qualities that may help protect neurons from oxidative stress. Ginkgo extract, another core ingredient, also helps fight free-radicals in the body.

Toothed Clubmoss which is another core ingredient of this supplement, contains Huperzine A, an acetylcholinesterase inhibitor that prevents the breakdown of acetylcholine in the body.

Velvet Bean extract also contained in Ginkgo Smart is a good plant source of L-Dopa, another significant neurotransmitter that is involved in mental and emotional responses, and may improve blood flow.

Ginkgo Smart is a good option if you are looking for a healthy, more natural supplement that can boost your memory and mind.

5) Where to Buy Ginkgo Smart

You can buy Ginkgo Smart Maximum Memory and Focus from the company’s website or retailers like Amazon, iHerb, and The Vitamin Shoppe.

The recommended dosage is two liquid soft-gels taken daily with at least 8oz of water.

The Ginkgo Smart Maximum Focus and Memory formula offers a healthier, more natural way to enhance mental alertness, focus, and memory. It contains a blend of researched ingredients that are primarily herbal and occur naturally.

Though there isn’t any research linked explicitly to the use of Ginkgo Smart Maximum Focus and Memory, it contains well-researched, high-quality ingredients. It is made by a company that has been in the supplement line for over 20 years. 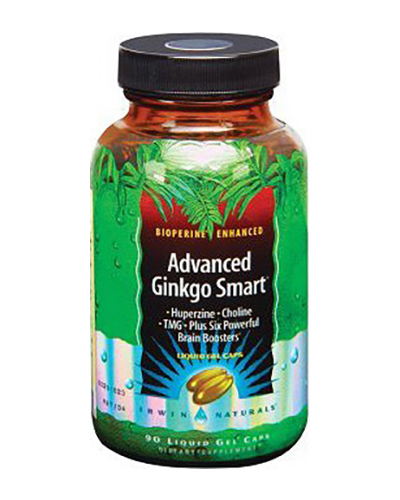 clear
Q:
What does Ginkgo Smart contain?
A:

Q:
What is Ginkgo Smart?
A:

The Ginkgo Smart Maximum Focus and Memory formula is a supplement that offers a healthier way to enhance mental alertness, focus, and memory.

Q:
What are the Ginkgo Smart side effects?
A:

There are no reported significant side effects linked to the use of Ginkgo Smart Maximum Focus and Memory.

Q:
Where can I buy Ginkgo Smart?
A:

You can purchase Ginkgo Smart Maximum Memory and Focus on the company's website or at retailers like Amazon, iHerb, and The Vitamin Shoppe.

Q:
How much does Ginkgo Smart cost?
A:

Q:
What are the benefits of Ginkgo Smart?
A:

Q:
Are there any dangerous ingredients in Ginkgo Smart?
A:

Q:
Who uses Ginkgo Smart?
A:

Ginkgo Smart Maximum Focus and Memory is generally used by those who want to benefit from its antioxidative and memory-enhancing ingredients like Ginkgo Biloba and Alpha-Lipoic Acid.

Q:
How should I take Ginkgo Smart
A:

You should take two soft-gels daily with at least 8oz of water.

Q:
How do I contact Ginkgo Smart customer service?
A:

You can contact Irwin Naturals customer support by calling 1-888-223-1548 or emailing customersupport@irwinnaturals.com.

Q:
Can I return Ginkgo Smart?
A:

Irwin Naturals offers a full refund if you return products within 60 days of purchasing them, even if they are open or used.

Q:
Who makes Ginkgo Smart?
A:

This product helped my ex-husband who had a very mentally demanding job. He never let himself run out of this product. Years later I started to use it, and it makes my mind work as fast and great as it used to when I was 30, and I sleep like a baby too!

I’m not real sure about most of the things they say about ‘supplements’ like this but said ‘what the heck, cant hurt anything to try’, so, I BARELY got thru high school (wasn’t taking it), BARELY passed a technical college course with a C (wasn’t taking it), so I decided to try taking it before starting another college course. Believe it or not I found it is easier now to pay attention to the teacher, pass tests without doing a whole lot of studying, and currently have a 3.75 GPA. So I guess I’ll keep taking it until school is over, cant hurt anything lol

I have read somewhere that Vinpocetine might induce side effects such as reduced immune function and depleted catecholamine levels leading to depression. Did somebody heard about this?

Vinpocetine is possibly safe for most people when taken by mouth appropriately, short-term. Vinpocetine can cause some side effects including nausea, sleep disturbances, stomach pain, headache, nervousness, dizziness, and flushing of the face. Vinpocetine may weaken the immune system in some people but this is a very uncommon side effect.

My memory, my attention works better since I took Gingo Smart. It helps me to keep mentally alert and that helps me a lot in my job.