Gingko 24 is an herbal supplement that claims to allow a person to feel better mentally. It is stated to assist with mood regulation, fatigue, stress level reduction, and improve focus.

The company that offers this supplement is Source Naturals. This relatively well-known manufacturer has become famous for its wide range of natural supplements. They are located in California, United States.

There is a 30-day money-back guarantee offered for Ginkgo 24. Those who are not completely satisfied with this product can ask for a full refund within 30 days from the purchase. It can take up to 10 business days from the request for an account to be credited.

1) What Are Ginkgo 24 Ingredients?

Ginkgo 24 is advertised as a standardized concentration of prime quality Ginkgo Biloba leaves. This plant is used to treat various health problems, many of which are still under scientific investigation.

The herb is well-tolerated, but due to multiple case reports of bleeding, it should be administrated with caution in patients on anticoagulant therapy and those with known blood clotting disorders.

It is essential to point out that Gingko Biloba has shown to be most useful as a memory enhancer in healthy patients. The plant may not be as effective in treating age-related memory loss. The clinical results we have for situations are still contradictory or uncertain.

Many consumers of Gingko 24 agree on similar results, including:

Ginkgo 24 is a cheap supplement. A bottle of Ginkgo 24 contains 60 tablets, enough for 2 months of treatment for the average user.

The product can be purchased from various online retailers. Some retailers may offer additional discounts and even free shipping for larger purchases.

Source Naturals is a company with a good reputation among its customers. This supplement has received numerous positive reviews and testimonials. This is an encouraging aspect.

Many people have found success in using Ginkgo Biloba to help enhance memory, but getting the right formula isn’t always easy because everyone is different and needs varying strengths of this blend. 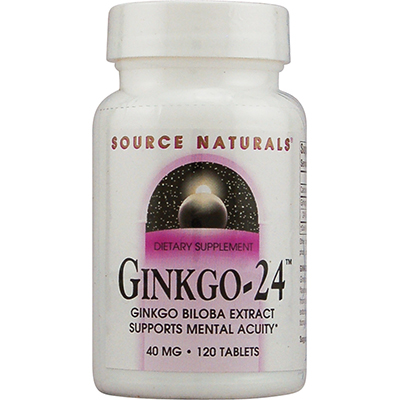