Botanic Choice Super Ginkgo Plus is an herbal supplement advertised to help improve mental function, especially memory and focus, provide important nutrients to the brain and leave consumers feeling mentally and physically younger. The supplement ismanufactured by Botanic Choice, a company with a tradition of over 100 years and which was initially called Indiana Botanic Gardens. The company has been in the same family since it was founded and was initially in the business of selling bulk herbs. Eventually in 1990 they also started manufacturing their own herbal supplements and products and currently offer a very large number of dietary supplements for many different health concerns.

Botanic Choice Super Ginkgo Plus contains a mixture of herbal extracts, amino-acids, and enzymes. The supplement mostly targets the elderly, but it can also be used to maintain healthy cognitive function by healthy, younger adults. Pregnant and nursing women should probably avoid the product due to Ginkgo Biloba associated side effects.

The recommended daily dosage is 2 tablets. Ginkgo Plus 5is available for purchase on the manufacturer’s website where buyers can benefit from various discounts and benefits.

Super Ginkgo Plus is an herbal formulation advertised to rejuvenate the body and mind and improve memory and concentration. It contains Alpha Lipoic Acid, a natural antioxidant found in our bodies used by our cells to turn glucose into energy. It can also be found in spinach, yeast, broccoli and potatoes or organs like liver and kidneys. The substance is believed to be an effective aid in a number of diseases like diabetes (lower sugar levels in the blood) and certain nervous system related symptoms of diabetes like pain, numbness, or burning sensation in the limbs. It can also pass the blood-brain barrier and is believed to help protect nervous tissue and that it might be used as a treatment for dementia or stroke. Alpha Lipoic Acid is also used to treat memory problems, eye problems like glaucoma or cataract, and chronic fatigue syndrome.

Super Ginkgo Plus is an herbal supplement claimed to aid in memory improvement, while also giving an energized and rejuvenated feel to the whole body. One of the main ingredients of the formula is Ginkgo Biloba extract, a herb widely used in memory aid supplements. In Chinese traditional medicine, this herb has constantly been used for thousands of years and was believed to help conditions like respiratory or digestive problems, poor circulation, and dementia. The herb is still used today mostly to address problems of the brain like memory and focus problems, depression, or even eye problems and headaches. Some clinical studies have shown the extract to possess antioxidant properties and improve circulation to the extremities, which might explain its ability to improve ear and eye function, memory, and concentration.

Another key ingredient of this formulation is Coenzyme Q10 or CoQ10, a substance similar to a vitamin, found in all the cells of our bodies and which is involved in several cellular processes like producing the energy the cells need to grow and function. CoQ10 can be naturally found in a series of foods like liver and other organs, soy oil, or peanuts. Coenzyme Q10 supplementation is believed to help boost energy, speed up recovery and help some diseases like cancer, cardiovascular problems, or gum disease.

The product is claimed to contain quality herbal extracts and comes in the form of tablets. The recommended dosage is two tablets daily. It is meant for adult use; there is no statement regarding use during pregnancy and nursing.

This is a relatively cheap product and is available on the manufacturer’s website. They offer some benefits that include discounts on 2 or more of the same product and free shipping for orders larger than $75. Buyers can also choose the auto-refill option that guarantees the same price as the first purchase for the entire auto-refill period. Botanic Choice also offers an unlimited guarantee on all its products meaning buyers can get their money back regardless the reason of dissatisfaction or the return period. The product is also available for purchase from numerous other re-sellers that may offer additional discounts or other benefits.

The product is sold in the form of tablets and each bottle contains 120 capsules. The recommended dosage is 2 tablets daily, so one bottle should be enough for two months. The product is meant for ongoing regular use and is mostly addressed to senior citizens. There is no mention of its safety for children or pregnant and nursing women, so it is best avoided use in such cases. The product can be bought directly from the manufacturer’s website, where buyers benefit from discounts on 2 or more of the same product and free shipping for orders larger than $75.

Super Ginkgo Plus is a herbal supplement claimed to leave users feeling younger, improve their memory and overall cognitive function using a unique blend of herbal extracts, CoEnzyme Q10 and Alpha Lipoic Acid. Even though there is some evidence to attest to the effectiveness of some ingredients in this formula, the manufacturer offers no clear evidence that this formula works as advertised. We advise our readers to carefully consider the potential effects of the product before taking it and decide whether it suits their needs and expectations. Keep in mind that all dietary supplements have different effects on different individuals and are best take only as advised by a professional. 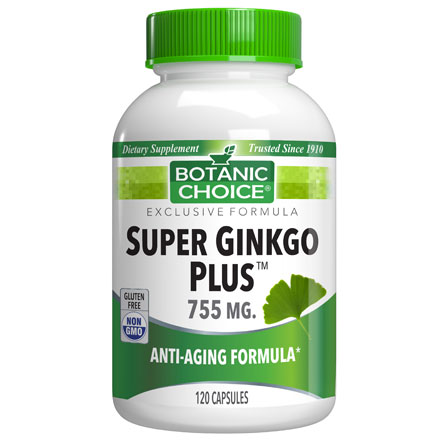 clear
Q:
What are the active ingredients in Botanic Choice Super Ginkgo Plus?
A:

Q:
What is Botanic Choice Super Ginkgo Plus supplement?
A:

Super Ginkgo Plus is an herbal supplement offered by the Botanic Choice Company. The product is advertised to improve memory and cognitive function, provide the brain with essential nutrients and also make users feel better and younger. It contains a mixture of Ginkgo Biloba extract, CoEnzyme Q10, Alpha lipoic acid, Ginger, and Cayenne meant to improve cognitive processes, stimulate the immune system, and maintain cardiovascular health. The product is meant for adult use only and the recommended dosage is 2 tablets daily.

Q:
Are Botanic Choice Super Ginkgo Plus benefits actually a reality?
A:

Super Ginkgo Plus is a herbal supplement advertised to improve memory and cognitive function and give users a rejuvenated feeling. It contains the famous Ginkgo Biloba, widely known for its positive effects on the brain and memory and also CoEnzimeQ10, a natural substance with many benefits. So far, Botanic Choice has failed to provide any scientific evidence that this particular formulation is indeed as effective as claimed. Until such evidence is provided, consumers should further research the potential effects of the product and decide whether it suits their particular needs and health concerns. The product should only be taken as recommended preferably by a physician.

Dad had the worst headache after a couple of these and he decided to quit. probably to strong for him.

loved it and recommend it to all my frinds!

I can honestly say that i love it! At 67 i feel young and healthy and I believe it’s also thanks to plus 5.

My dad is in his 70s and he’s been taking Ginkgo Plus 5 for about 2 years now and he\’s really doing great. Perfect memory and lots of energy. He never misses one!