Fo-Ti Root is an herbal remedy manufactured by Nature’s Way, a very well-known and trusted company from United States. The main ingredient is fo-ti root, a component which helps in dealing with hormonal, anti-cancer, estrogen, and cardiovascular issues. According to the manufacturer the product, this is one of the four great herbs of China and it is recommended to be associated with Ginseng. Raw, un-prepared fo-ti root has strong laxative properties.

Nature’s Way is a very popular supplement company founded in Utah, United States, in 1969. With more than 40 years of experience on the market, the company earned the trust of a large amount of consumers from all over the world. They have received a lot of positive reviews and testimonials over the years so they have become very popular in most countries.

Fo-Ti Root is considered to be a remedy for hair-loss and early graying, being also useful for kidney and liver problems. It is also told that Fo-Ti Root protects your skin from certain damages caused by sun exposure. There are many evidences claimed by scientific research of potential benefits and side effects of the product. In many cases the product was an efficient remedy for hair-loss and improving immune system’s functions, many users of Fo-Ti Root being very happy with the results.

A bottle of Fo-Ti Root has 100 capsules, each capsule containing 1.22 g of Fo-Ti Root. The manufacturer recommends the intake of 2 capsules each day with food or water. For best results, you should use the product continuously.

Fo-Ti Root, the main ingredient, is considered being one of the top four favorite herbs used for ages in traditional Chinese medicine. It works well associated with Ginseng, which is another tonic herb with magic health properties. Regarding the hormonal benefits, Fo-Ti Root alongside other natural supplements like Siberian Ginseng, devil’s club and others maintain the adrenal function’s health. The product is also indicated for thyroid problems and also reduces the relapses of symptoms after the treatment completion.

It has been proven that the product contains high concentrations of resveratrol, an antioxidant with powerful results in apoptosis, which triggers the process of cancer cells death, limiting the spread of the affected cells. It regulates the reproduction and growth of the cells and also decreases inflammation. Fo-Ti Root associated with other anti-cancer drugs increases their effectiveness. It also provides cardiovascular, cardio-tonic, hypotensive, and sedative health benefits.

Fo-Ti Root is an herbal supplement presented as a bottle containing 100 capsules, each one having 1.22 g of Fo-Ti Root. For regular usage, there is necessary an intake of 2 capsules per day with water or food. The main ingredient has been researched, and it has been proven to be an effective tonic and body energizer for long-term usage.

The manufacturer recommends the association of Fo-Ti Root and Ginseng. According to the users’ feedback, the product is useful with hair-loss and also helps to deal with erectile dysfunctions. The product is a powerful source of energy and vitality. It is a tonic of bones, tendons, muscles, liver, and kidney.

There has been scientific research that claims that Fo-Ti Root contains an alkaloid with rejuvenating effects on brain cells, endocrine gland and also on the nerves. It is a stimulator of the adrenal gland and helps with body detox. It has a large variety of uses including constipation, high blood pressure and cholesterol, atherosclerosis, fatigue, nerve damage, blood deficiency, eczema, and fatigue. It has anti-inflammatory properties helping reduce the inflammation of lymph nodes.

The main ingredient contains a big amount of a powerful antioxidant called resveratrol. Fo-Ti Root may be associated with other anti-cancer drugs to enhance their efficiency. Resveratrol induces apoptosis, the process of programmed cell death. Cells self-destruction reduces the spread of the cancer cells, and that is why the product may help as a complementary therapy for cancer.
Do not use Fo-Ti Root if you are pregnant, lactating or have diarrhea. It is not recommended during and after surgeries or on patients who have liver diseases because it enhances the illnesses.

There are online testimonials about Fo-Ti Root. What it has been reported includes:

5) What You Need to Know Before Taking Fo-Ti Root

Fo-Ti Root is an affordable herbal remedy with worldwide recognition. According to the manufacturer, the bottle has 100 capsules, a sufficient amount for almost a two months’ supply. The supplier’s recommendation is of an intake of two capsules daily taken with food or water are being sufficient for regular usage. Long-term use is strongly advised for best results.

The product cannot be bought directly from the official website of Nature’s Way. But it is available both in pharmacies and online at low shipping costs. The manufacturer does not offer a free trial on their official website.

There are a few precautions and warnings regarding Fo-Ti Root. It is not recommended during pregnancy, breast-feeding, or if you suffer from diarrhea, because it contains chemicals with a strong laxative effect. It is also best to avoid applying it directly to the skin by lactating or pregnant women. There are concerns about the usage of the product for patients with hepatitis or other liver problems, because it tends to exaggerate the existing illness. During and after surgeries Fo-Ti Root might affect blood sugar levels.

There are many testimonials that claim the efficiency of the product for people dealing with hair-loss problems. Users say that after a few months of treatment they can see a change regarding the quality of their hair, which becomes fuller, thicker, fast growing and stronger. Other users are claiming that the product has significantly improved their sex life and their general well-being.

The Fo-Ti Root is a powerful antioxidant because it contains high concentration of resveratrol. There are evidences that it has anti-cancer benefits and also limits the spread of cancer cells.

Therefore Fo-Ti Root can be used successfuly as a supplement for your general health and immune system. For better results, it is recommended to associate it with Ginseng on a daily basis. 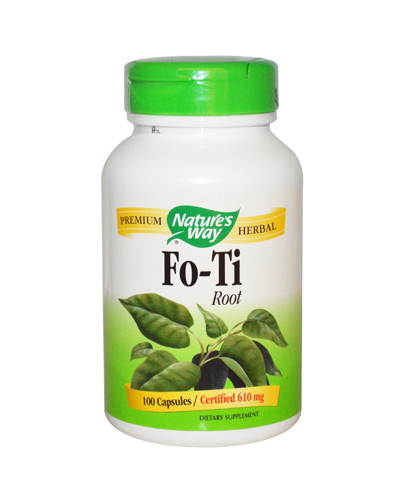 clear
Q:
What are the active ingrediens in Fo-Ti Root?
A:

Fo-Ti Root is known from ancient times as an effective herbal remedy bringing color back to graying hair. It is manufactured by Nature's Way, a big well-known supplement provider company from United States. It can be used as an additional supplement alongside other prescribed drugs for cancer and certain liver diseases. It is also good for your heart, kidneys, hormones, and immune system. Most people use it with ginseng. Fo-Ti Root has a large palette of uses, but most claimed positive effects are in the area of sexual imbalances and hair-loss problems.

Fo-Ti Root is an herbal remedy that is efficient as a general health tonic and energizer. The manufacturer, Nature's way, is a highly trusted natural supplier delivering top quality herbal supplements recognized all over the world.

Many testimonials claim that Fo-Ti Root, on a long-term usage, has consistently improved the health of sexual organs, helped to decrease hair loss and enhance the strength and thickness of the hair.

Other benefits of the product have been observed in the area of anti-cancer, estrogenic, cardiovascular, and hormonal imbalances. And, most importantly, Fo-Ti Root, alongside Ginseng, is highly appreciated for improving immune system's functions. You will not be disappointed with the results.

For many years I am struggling with all sorts of drugs and shampoos for hair loss treatment without any result. One day, my friend told me her secret and recommended me Fo-Ti Root. I am amazed with the results. I am using it for 6 months and already the amount of hair loss has been significantly decreased. More, I have noticed that my hair is now healthier, thicker and stronger. I hope it will work for you, too.