Bilberry is advertised as a remedy particularly created to improve vascular integrity, build connective tissues, support proper fluid levels, improve peripheral circulation, and also provide protection for the damage made by free radicals in the human body by increasing the number of antioxidant.

This supplement is offered by a business named Standard Process which was built on American ground in 1929. Its founder, Dr. Royal Lee, claims that the motive behind creating this business relies on the idea that the source of an ingredient is providing more reliability than the quantity of each used in several dietary supplements. Due to this, even a remedy featuring small amounts from whole foods may make a difference on the person taking it. Standard Process states that customers need to be confident when it comes to the integrity of the herbal manufacturer so they can ensure that the product features state amount of label-described compounds which haven’t been adulterated or made to look similar to top quality and contain genuine anthocyanosides.

Bilberry is a part of MediHerb and their scientists have worked with other scientists from various universities in Australia and they detected the deliberate adulteration of Bilberry extract so they can recognize it if it appears in their products.
The daily recommended intake is of one to two tablets, four times per day.

The common name, bilberry, is derived from the Danish “bollerbar” that means “dark berry”. The fruit of bilberry was utilized in traditional medicine ever since the Middle Ages. Some clinical studies that were conducted in Europe revealed that the extract of this plant features substantial levels of a constituent named anthocyanosides. Also known as anthocyanins, it is a plant pigment responsible for the blue, red and purple coloring of the plant tissue, specifically the fruits.

Bilberry supports peripheral circulation and vascular integrity, thus easing occasional effects of throbbing discomfort. Moreover, it maintains the health of the eyes as well as urinary tract function. The interest in the utilization of Bilberry actually started during World War I, time in which British Royal Air Force pilots observed an improvement in their night vision after consuming the fruit. Recently, it was used in Japan in a clinical trial for people that generally work with computers.

It is thought that an assessment of various fruits found in Bilberry feature high levels of antioxidants, thus there is provided a protection against damaging effects of free radicals in the human body.

2) What Are Bilberry Ingredients?

Bilberry represents an affordable remedy which can be purchased either directly from the manufacturer website, if within the United States, or other online or local suppliers. Even though its price may vary, it is important to note that most of the suppliers offer promotions and discounts if the product is bought in more than two bottles. Each bottle features 60 tablets, and because the daily recommended intake is of one to two tablets, four times per day, it can last for approximately ten days. However, potential new customers can’t take advantage of a free sample before making the purchase, and they can only rely on existing online feedback.

Even though Bilberry is considered to be likely safe when consumed through extracts or powders, bilberry is only possibly safe for people that take it in high dosages or use it on long-term. Diabetic people have to keep in mind that bilberry can lower the levels of sugar in their blood, thus if they want to follow this treatment, they should closely monitor their blood sugar.

Promoted as a reliable and cost-effective formula, Bilberry is useful for a wide array of medical conditions or symptoms of some disorders. Ranging from cardiovascular system to the eyes and easing occasional effects of throbbing discomfort, this supplement bases its effects on a plant which has been utilized since the Middle Ages. There are some clinical studies that reveal its beneficial effects on heart and vision. On the other hand, diabetics should think two times prior to following this treatment due to the fact that this plant thins the blood and they should closely monitories their progress to avoid possible discomfort or possible reactions. 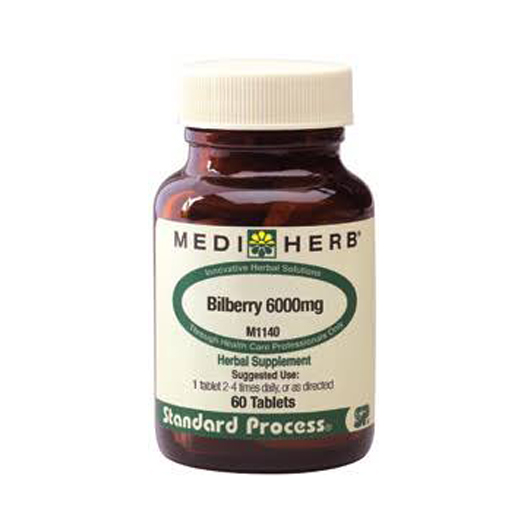 clear
Q:
What are the Bilberry ingredients?
A:

Bilberry represents another Standard Process formula based on the positive effects of a plant which has been used even from the Middle Ages. It is a formula offered by Standard Process, a company established in 1929. Its vision enhancing properties were discovered during the World War I where soldiers noticed an improvement on their night vision after consuming this fruit. However, diabetic people should think twice before following this treatment and, if they do, they should closely monitor their progress.

Q:
Does Bilberry work?
A:

Advertised as a cost-effective and reliable formula, Bilberry can be useful for a wide array of medical conditions. Varying from cardiovascular to the eyes and easing effects of occasional throbbing discomfort, this remedy bases its positive effects on a plant that has been used since the Middle Ages. There are some clinical trials which reveal its beneficial effects upon vision and heart. However, people with diabetes should think twice before following this treatment because this plant thins the blood and they have to closely monitories their progress to avoid possible discomfort or potential reactions. It can be taken by everyone who desires an enhancement of the entire organism, but it should be balanced with exercising and a healthy diet to achieve faster results.

I always buy this product for my friend overseas. She swears by this product (Bilberry in general, but I always bought her this brand). She says it’s really good for her eyes.